Mercedes-Benz is showcasing how last mile delivery vans can become even more eco-friendly by introducing the new Sustaineer concept. 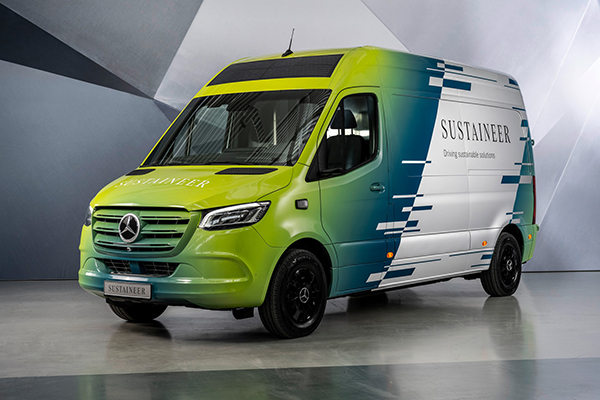 Based on the eSprinter, the model is billed as a technology demonstrator that incorporates “solutions to enhance quality of life and road safety in cities, protect the climate, conserve resources, and improve driver health and safety.”

While the van looks instantly recognizable, a closer inspection reveals a few telltale signs about its eco-friendly nature. The most notable is the addition of solar panels, which span an area of 51.7 square feet and generate up to 850 watts of power. However, they don’t recharge the van’s battery as the solar panels are designed to be used for running “energy-intensive systems such as the air-conditioning and load compartment cooling systems, or for charging battery-powered tools, smartphones and laptops.”

On the topic of climate control, the Sustaineer has a reimagined heating system as delivery vans have large cabs as well as doors that are constantly being opened and closed allowing hot air to escape.

To cope with these challenges, the concept “delivers warmth exactly where it’s needed.” In particular, the model is equipped with a heated steering wheel and a heated seat belt that has extremely fine heating filaments woven into it. Mercedes says the heated seat belt delivers a “pleasant degree of warmth to the upper body, where a particularly large number of temperature receptors are found.” The company also noted the belt has a more rapid warming effect than a traditional heated seat.

Mercedes went on to say the heated steering wheel and seat belt could be joined by a zonal climate control system that only heats the area around the driver. This makes a lot of sense as trying to heat the whole interior would have a negative impact on range.

Moving on, the van uses recycled materials to minimize its environmental impact. The underbody paneling was constructed from recycled polypropylene and used tires, while the partition between the load compartment and the cab uses natural straw panels that are recyclable and biodegradable. 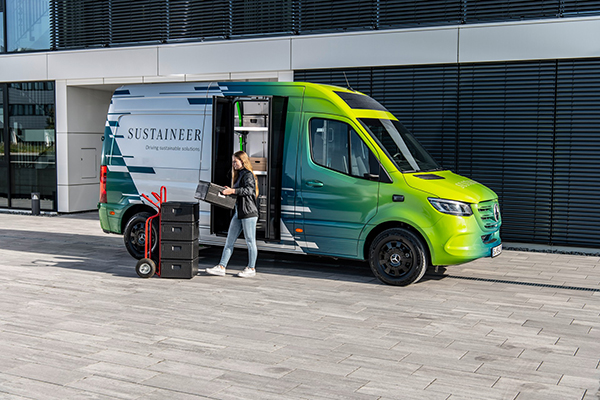 To improve air quality, the van has been equipped with an underbody particulate filter that is located near the rear axle. While it’s odd to see an EV equipped with a filter, Mercedes said it traps particles stirred up by the van and other vehicles.

The model is also equipped with a second particulate filter that works when the van is being driven or charging. Thanks to the two filters, fine particulate emissions are reduced 15% while driving and 35% during charging.

Speaking of air quality, the van has cast iron brake discs that feature a ceramic coating that helps to reduce wear and brake dust. The model also rides on low rolling resistance tires, which have lower rubber wear than traditional tires and this helps to reduce particle emissions. 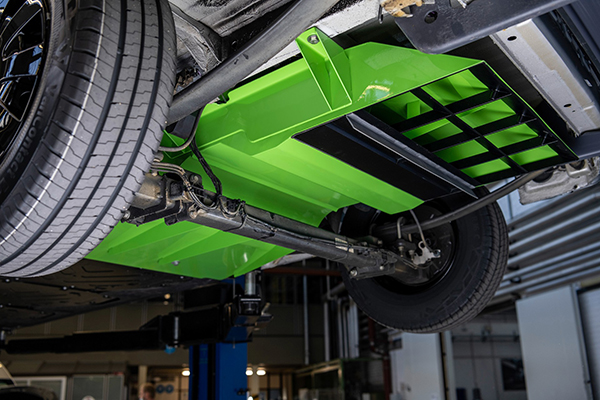 Getting back to the exterior, the van is equipped with a Speed Delivery Door that carries over from the Sprinter. The double swiveling door replaces the traditional sliding door and is transparent. More importantly, it opens and closes automatically.

Furthermore, the Sustaineer has digital side mirrors known as Mirror Cams. They offer improved aerodynamics as well as an increased field of view, when compared to traditional side mirrors.

Last but not least, Mercedes is working to “allow any desired Android applications to be used safely in the vehicle without distracting the driver.” This is because many delivery companies use specialized logistic and navigation software, but it’s conceivable this could also be extended to consumer models which would be a boon as the aim is to use Android apps directly on the MBUX infotainment system.