In celebration of it being just over a year since I finished the van build, here it is condensed into one minute. Was it hard slog over a very testing winter? Yup. Was it worth it? Not only has it already taken me on some epic adventures (with many more planned), it was a project that saved me when I wasn’t in the best head space. Couldn’t love my home on wheels anymore!

Like Amy Nicholson did. Amy is what you’d call a vanlifer: she’s been living out of her van for more than a year, is traveling the world and working from her improvised office at the back of her van, and she is active online, where she shares bits of her life with the community. At first glance, Amy is the stereotype vanlifer, who presents a perfectly happy picture of life on the road, but she stands out because she is actually trying to present both sides of the coin.

More importantly, she’s trying to be honest. Her van conversion is not suitable for everyone, but it is for her. Her life is not perfect and is definitely not easy, but it works for her at this moment. She hopes her story will help inspire others who might be tempted to give vanlife a try.

Before she lived in a van she converted herself, Amy used to work as a marketing consultant in London. With the 2020 international health crisis, she lost her apartment in the capital, so she moved back in with her parents. She continued working remotely while using a short wheelbase Vauxhall Vivaro for weekend getaways and the occasional extended trip. The van, she says, was not the best, but it was enough to make her see herself traveling full-time: the 9-to-5 lifestyle simply didn’t suit her.

In the winter of 2020, Amy bought herself another van, one which she planned to convert by herself into a home on wheels to cut down expenses. By then, she knew she wanted more space inside, as well as standing height, so she opted for a medium wheelbase High Top Mercedes Sprinter van, which she bought on eBay for £11,000 (approximately $13,300 at the current exchange rate). She wanted a newer model so she wouldn’t have to think of repairs for a while and one with fewer miles on the odo.

The conversion cost her another £10,000 ($12,100), and she did it mostly by herself, in her parents’ driveway, working whenever she had the time for the next six months. The result is a van that is a very cozy and comfortable home for one adult, with a bedroom area that doubles as both living and office, a kitchen, and storage space. Of course, sacrifices had to be made: Amy chose ease of operation and storage over space, so her van only has a portable cassette toilet, no hot water, a rather small freshwater tank, and only an outside shower. 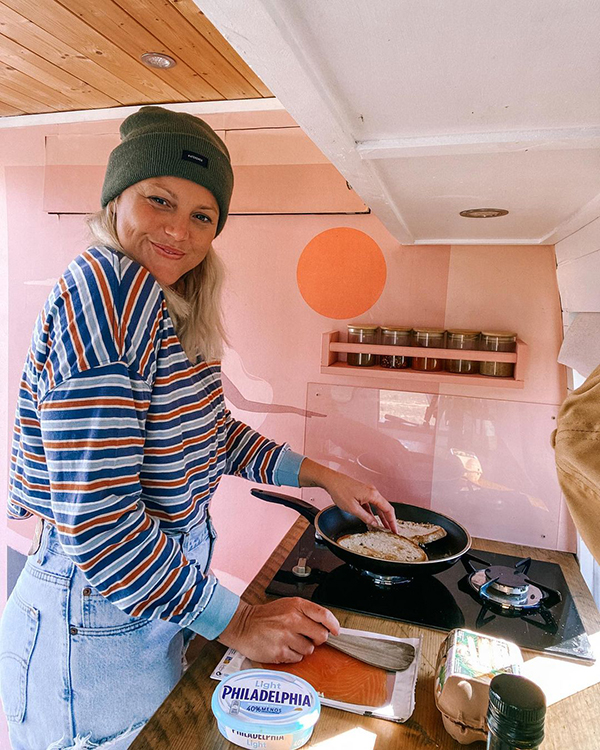 But it does have a kitchen with a Dometic fridge, a two-burner gas stove, running water and sink, and plenty of cabinets. It has a two-person bed that becomes a double couch with a swiveling table during the day. It has a heater that runs on a separate tank of diesel. It has plenty of storage space and even more homey touches that Amy herself added (she built the furniture on her own). It also has an exterior shower with privacy curtains because Amy is a passionate surfer.

The van is insulated and has sound deadening, several windows, and a skylight for cross-ventilation. It has solar panels on the roof, with the inverter and battery banks hidden under one of the couches, so Amy never has to worry about running out of juice – even if she sometimes runs out of water when she’s washing her face.

In a new interview, Amy says that being a digital nomad is not for everyone, no matter how idyllic it might come across on social media. There are obvious disadvantages to this lifestyle, including having to shower at campsites, the gym, or friends’ houses, having to go months on end without seeing family, the lack of a routine, or having to empty the toilet every other day. But there are advantages, too.

In the end, it’s one’s preference that tips the balance between the two, Amy says. Where she’s concerned, the freedom she finds with her home on wheels tops any annoyance she encounters on the road.