Mercedes-Benz Sprinter 2500 Cargo Van 170″ Wheelbase High Roof is the second-biggest version of the Sprinter 2500 Cargo Van you can get. The biggest? The Extended Wheelbase that contradictorily has the same wheelbase but extra length beyond the axle. The specs say that the 2500 with this van’s 3.0-liter turbodiesel V6 has a payload of 3,737 pounds. That’s considerably more than the last Mercedes SUV I luggage tested, the Mercedes-Benz GLB 250. 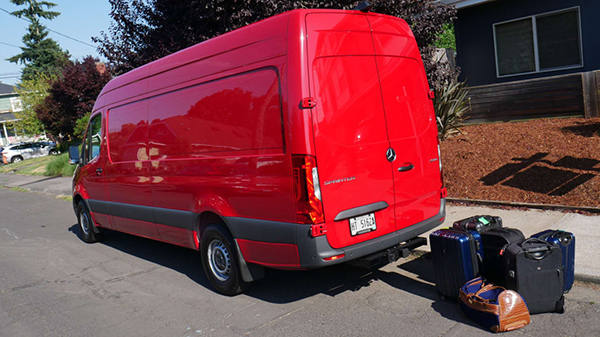 I typically don’t tackle payload in luggage tests, though, because for some weird reason, car companies don’t advertise that info as readily for Konas and Civics. That just seems like laziness. What I usually base these tests on is cubic-feet and specifically, the amount of cargo space behind a vehicle’s rearmost seat. Much like a Toyota Supra or Mazda Miata, however, the Sprinter Cargo’s rearmost seat is also its forward-most seat. This should give the Sprinter a significant advantage.

Indeed, the specs say the Sprinter Cargo Van 170″ Wheelbase High Roof has 488 cubic-feet of cargo space behind its rearmost seating row. That’s more than the next-largest Mercedes I’ve luggage tested, the AMG GLS 63, which has 17.4 cubic-feet behind its rearmost seating row. However, as I’ve seen time and time again, including with Mercedes, a vehicle’s on-paper cargo specs can often not reflect reality. 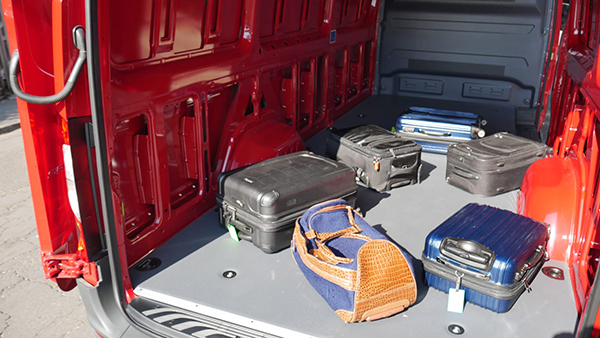 Let’s see how the Sprinter does.

Yeah, we’re good.
Just to be sure, though, I tried a different method.

Confirmed. Just unceremoniously chucking them in was also effective.
And finally, just to be sure.