The ultimate biking van is here. Tails was built with avid cyclists in mind whether they’re mobbing down single track deep in the woods of British Columbia, trekking upwards on petrified sand dunes of Moab, embracing joyous torture that is cyclocross, and everything in-between.

It’s called Tails and it’s a custom van designed with the adventurous cyclist in mind. We’re talking about the kind that drives to a destination, sets up camp and then heads out on his bike, with the mention that Outside Van created a van that also allows to bring someone along. After all, some hobbies are more enjoyable if they can be shared with a friend.

Tails is described as the “ultimate biking van” and a complete mobile bike mechanic station, and it lives up to the name – at least in the official presentation. It can sleep two people in relative comfort and comes with the basic creature comforts, and it can carry as many as six bicycles. More importantly, though, it comes rigged with everything you need to do a little tinkering on-site, both on your machine and your friends’.

Based on a 2021 Mercedes-Benz Sprinter 144 van, Tails rides on Black Rhino Yellowstone 17″ wheels clad in off-road tires, allowing you to get to wherever you want, no matter how rough the terrain. The van is all-wheel drive, most likely powered by an 188 hp 3.0-liter turbodiesel V6, and features Fox 2.0 front and rear shocks, safari roof rack and a 50-inch LED light bar.

But it’s what’s in the back that’s most likely to get bikers’ attention: in addition to the possibility of hanging four bikes on the rails outside, Tails can store two more in the back inside. Also here is the aforementioned bike mechanic station, with custom tool rolls, a flip-down worktable, a garage gear glider, Molle Panels, and an ARB air compressor with multiple attachment sites. 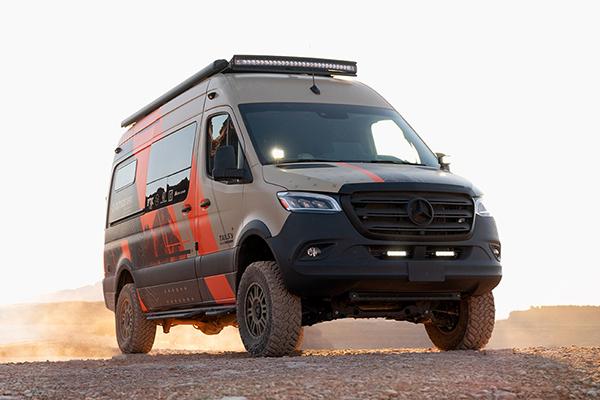 “Tails was built with avid cyclists in mind whether they’re mobbing down single track deep in the woods of British Columbia, trekking upwards on petrified sand dunes of Moab, embracing joyous torture that is cyclocross, and everything in-between,” Outside Van says of its latest custom rig. “We’ve maximized every inch of this 2021 Mercedes-Benz Sprinter 144. Tails is a full basecamp for overnight adventures.”

As a basecamp, Tails offers a two-person bed in the rear and a fold-down couch that serves as seating during mealtimes and could double as a secondary berth for one if need be. There’s a kitchenette with a deep sink with spraying faucet, induction stove top, microwave and refrigerator, and a 20-gallon (75.7-liter) freshwater tank. Bathroom facilities are predictably minimal, with a cassette toilet and an outside shower, but they will have to do. The interior is utilitarian in its layout and styling, but not devoid of style.

Tails has AC and several power outlets for your gadgets, many of which are powered by a lithium-ion battery and roof-mounted solar panels. Strip away the biking gear in the back, and you’d get a solid option for off-roading, though the market is filled with alternatives for that.

Speaking of market, Outside Van doesn’t offer pricing or availability for Tails, but there is clear indication that this is a real build that will reach customers at some point. HiConsumption reports that pre-orders will open “soon,” hinting that further customization from what is shown in the official presentation might be possible.