We’ve got our hands on the all-new Mercedes-AMG SL 55, and it’s about to go head-to-head over the quarter-mile against a classic SL 55 from 2004!

It’s an old car, there’s no denying that, and in typical Mercedes-Benz fashion, it’s quite a bit more affordable nowadays. Notoriously hard and expensive to fix, the R230 in this particular specification used to retail at £90,000 back in the day, which is $109,200 at current exchange rates. Currently going for about £30,000 ($36,400) or thereabouts, the R230-generation 55 is rocking a different engine and gearbox from the R232.

But as the headline implies, this R230 isn’t stock. This fellow actually makes 625 ponies at the crankshaft, whereas peak torque is a mystery. Tipping the scales at 1,885 kilograms (4,156 pounds), the two generations older SL features a five-speed automatic and good ol’ rear-wheel drive.

Moving on to the R232, the 55 series currently weighs 1,950 kilograms (4,299 pounds) and comes with all-wheel drive. That should make a huge difference from a dig, but more on that later. It also features a proper soft top as opposed to the retractable hard top of the R230, and the nine-speed automatic transmission is a multi-clutch unit with a wet start-off clutch replacing the torque converter. Not only does it reduce weight, but the slightly lower inertia optimizes response during spurts and load changes. 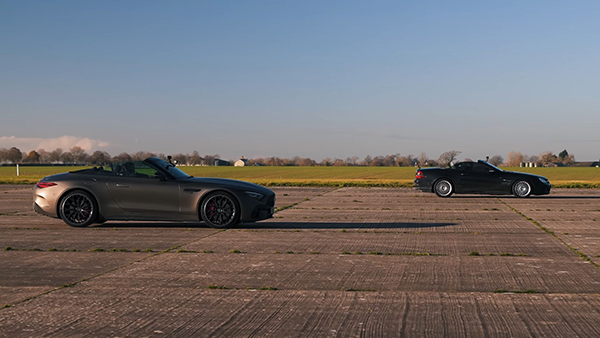 Under the hood, you’ll find the M177 wet-sump V8 as opposed to the dry-sump M178 that Mercedes-AMG used in the now-discontinued GT Coupe and GT Roadster. Fret not because the GT Coupe will come back as the SL’s coupe-bodied cousin. The switch to the all-new SL’s platform also means the switch from dual-clutch gearbox to auto and RWD to AWD.

On that note, how do 11.5 seconds in the quarter mile sound to you? Not bad for such a heavy car, especially not the range-topping variant of the SL. The modified R230, on the other hand, couldn’t do better than 12.3 clicks.