Officially born in 1967, in an old mill in the small German town of Burgstall, AMG’s initial connection with Mercedes-Benz only revolved around the fact that every car that the two former Daimler engineers were modifying had a three-pointed star on the hood.

It took some years for the relationship between the two companies to evolve, both regarding motorsport endeavors and road car shenanigans. “Motorsport endeavors” are key words since most of AMG’s experience in transforming sedated Mercedes-Benz models into four-wheeled smoke machines resulted from its racing roots.

From its humble beginnings as a small racing shop, AMG evolved into an aftermarket tuner and is now a highly profitable division of Daimler, so over the course of its 53-year history, it was in charge of creating some of the most desirable and sporty Mercedes-Benz models that ever saw the light of day.

Since there are so many cool AMG-tuned or -built Mercedes-Benz models to choose from, especially since in recent years the lineup has increased exponentially, we decided to concentrate our attention on some of the lesser-known monsters that proudly came out of Burgstall and, more recently Affalterbach, the headquarters of the three little letters that could.

When it started in the 1971 edition of the 24 Hours of Spa-Francorchamps, the “Red Pig” likely dropped a significant number of jaws, but not as many as it did by winning its class and finishing second overall in the grueling endurance race.

The first AMG Leviathan was powered by a 6.8-liter version of the already huge V8 that was until then found in the Mercedes-Benz 600 “Grosser” and the 300 SEL 6.3, on which the model was also based.

With 428 HP on tap, a much stiffer air suspension, obscenely wide 15-inch tires and a bunch of aluminum body parts to bring its weight down to about 1,635 kg (3,604 pounds), the 300 SEL 6.8 AMG was pretty much like a Sumo fighter trying to do ballet dancing, but it ultimately worked.

1988 Mercedes-Benz 300 E 6.0 AMG “Hammer II”
The idea of fitting slightly smaller cars with the biggest engine they could find didn’t end with the “Red Pig,” that’s for sure, and you could say that it’s actually one of AMG’s trademarks over the years.

A similar take was used on the E-Class W124, in which AMG transplanted a modified version of a V8 normally found only on the largest Mercedes-Benz models at the time. Nicknamed the “Hammer” by U.S. media when it crossed the pond, the Mercedes-Benz 300 E 5.6 AMG was at the time the fastest four-door sedan in the world.

We’re not going to talk about it, though, but about its even more powerful successor: the 300 E 6.0 AMG, or the second “Hammer.”

Powered by a 6.0-liter, naturally aspirated V8 with 385 HP and 550 Nm (406 lb-ft) of torque, the most powerful E-Class Hammer came with a bang and left a mark in 1988, and has since become the most coveted W124 model in history because of its rarity and massive performance.

1954 Mercedes-Benz 300 SL AMG HWA
Despite having been (sort of) built in the mid-1990s, the Mercedes-Benz 300 SL by HWA is still a 1954 model because of a very simple reason: it’s actually a restomod – the first and so far the only one made by AMG, although in cooperation with HWA.

For those unfamiliar with HWA, the company’s initials come from Hans-Werner Aufrecht, one of the two engineers who founded AMG back in 1967. More recently, HWA has been Mercedes-Benz’s official partner in a number of motorsport series, including the DTM.

Getting back to this rather peculiar 300 SL version, it seems that only 11 units were ever built, and all of them were converted from original 1954 models to feature more modern interior amenities and a new drivetrain courtesy of AMG.

Apparently, the little side project was initiated at the request of the Sultan of Brunei, who has been known to amass a gigantic collection of one-offs and other special cars over the years. Among other mods, the car’s original inline-six was replaced with a 6.0-liter V8, which was attached to a four-speed automatic transmission. The model also received an independent suspension, disc brakes, and an all-new interior.

1999 Mercedes-Benz SL 73 AMG
Along with AMG’s transition from just a racing partner and independent tuner to a part of Mercedes-Benz, the company decided to celebrate the much-improved relationship with a special SL (R129) that was fitted with one of the largest road car engines in Mercedes-Benz history.

Officially called the SL 73 AMG for obvious reasons, this very rare Mercedes-Benz SL was powered by an engine that was related to the one from the S and CL 600.

Displacing no less than 7.3 liters, the monster V12 under that silver hood was able to develop a not-to-shabby 525 HP and 750 Nm (553 lb-ft) of torque without the help of any turbocharger or supercharger.

First offered in 1995 and then again in 1998, only 85 units were ever built of the most powerful production SL up to that time. A version of the fantastic-sounding 7.3-liter V12 later went into the Pagani Zonda C12 S 7.3, F, Cinque and Tricolore, and back then it was by far the lightest twelve-cylinder engine thanks to the massive usage of aluminum in its construction. 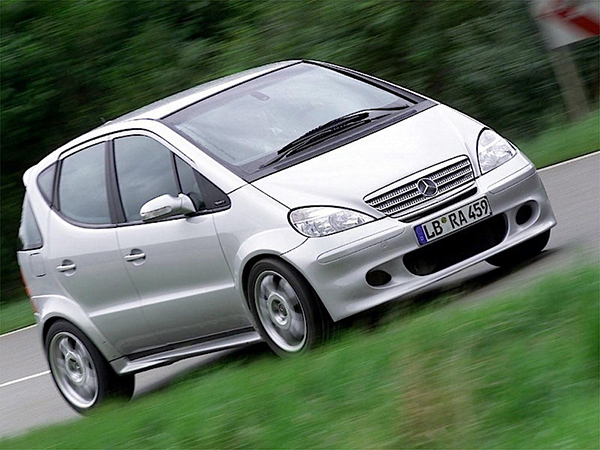 The first was AMG, who decided that the A 190 was in dire need of some extra displacement and maybe a bit more traction. Instead of increasing the tiny four-cylinders’ bore and/or stroke, the engineers decided to simply fit a second, identical engine on the car.

This is how the A 190 Twin study was born, of which only 4 cars were ever built. The first A-Class’ intelligent sandwich floor allowed AMG to fit the second 1.9-liter engine along with another gearbox underneath the luggage compartment, in the same vein as the smart fortwo. This essentially made the A 190 Twin an all-wheel-drive sports car with two gearboxes operated by the same shifter and 250 HP.

If you don’t think that’s insane enough for an A-Class, HWA went a little bit further in 2000 and converted an A 190 from FWD to RWD. Obviously, that wasn’t crazy enough, so they somehow also switched the model’s tilted and transverse four-cylinder to a supercharged, 3.2-liter V6 mounted longitudinally and borrowed from the C 32 AMG. Until the modern A 45 AMG arrived on the scene, the HWA A32 K remained the most powerful but also the rarest A-Class.

2001 Mercedes-Benz S 63 and CL 63 AMG
When Mercedes-Benz launched the W220 generation of the S-Class in 1998, the word of the day was “fuel economy,” so Stuttgart wanted to test the waters with an S 600 top-of-the-range version that wasn’t quite like its predecessor. Internally codenamed M137, the short-lived V12 under the S 600’s hood was worse than the M120 it replaced in every way except fuel economy and weight.

Displacing 5.8 liters and featuring an odd SOHC arrangement with just three valves per cylinder, the new V12 delivered a puny 367 HP and 530 Nm (390 lb-ft) of torque, both numbers being lower than on the engine found in the S-Class W140.

Despite the much tamer base, AMG engineers got to work and the now in-house tuner unveiled the first ever S 63 and CL 63 AMG models in 2002, right before the S-Class facelift switched to a new, twin-turbocharged V12.

Unlike modern “63” AMGs, the 2002 Mercedes-Benz S 63 and CL 63 AMG were powered by a naturally aspirated V12 based on that dreadful three-valve per cylinder design. That didn’t stop them from offering a modern take on the “Hammer” with 444 HP and a massive 740 Nm (544 lb-ft) of torque at their disposal.