Just a few days after our spy photographers caught the facelifted Mercedes-AMG GLA 35 testing out in the open, they snapped the even more powerful GLA 45 variant which will retain the title of the performance flagship in the compact SUV’s range following next year’s update. 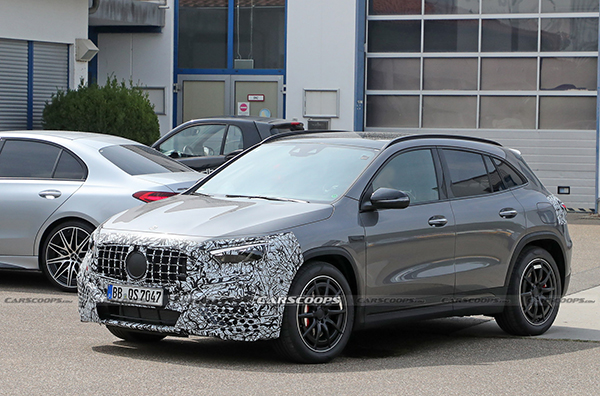 The hot GLA prototype featured light camouflage on both ends, trying to hide the mild visual changes. Interestingly, it came fitted with a set of 19-inch alloy wheels, which look rather small for such a powerful machine, especially when you consider that the GLA 35 prototype got the optional 21-inch alloys.

While the wheels do make a difference, the true nature of the GLA 45 prototype is revealed from the quad exhaust pipes at the back, instead of the dual pipes of the GLA 35. We can also see the rear spoiler extension and the diffuser although the latter appears to be broken in this specific example. 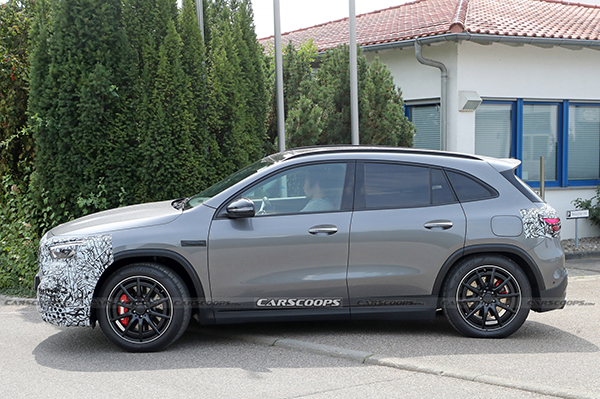 The camouflage wrap doesn’t allow us to have a proper look at the facelifted model, but we expect the updated GLA 45 to inherit revised LED graphics on the headlights and the taillights, a slightly different Panamericana grille, and a redesigned front bumper similar to the one on the GLA 35. Differences between the two AMG-branded GLAs will include the functional bumper intakes on the 45 and 45 S, which are covered in the 35. The optional aero kit adds a more pronounced splitter, canards, and a fancy rear wing for an even sportier appearance.

Just like the entire Mercedes compact family, the facelifted GLA will get a series of interior updates, with the most important being the updated MBUX infotainment system, the new steering wheel, and the demise of the trackpad on the center console. The AMG variants are also getting bucket seats, flat-bottom steering wheels, aluminum pedals, colorful stitching, and Alcantara upholstery. 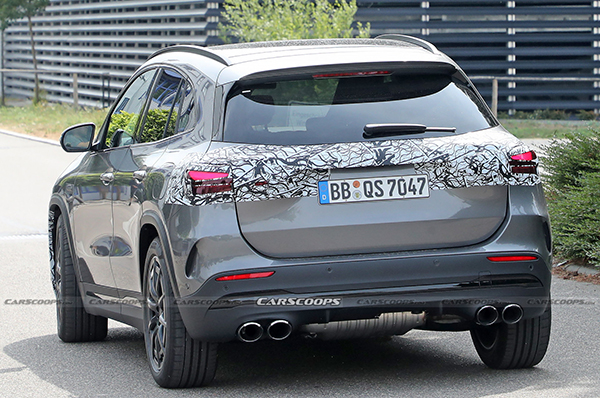 The Mercedes-AMG GLA 45 is one of the most powerful and capable compact SUVs money can buy. Under the bonnet lies the same turbocharged 2.0-liter four-cylinder unit that is also fitted on the A45 and the CLA 45 siblings. Currently, the mill produces 382 hp (285 kW / 387 PS) in the 45, and up to 415 hp (310 kW / 421 PS) in the 45 S variant that is not available in the US. We don’t know if AMG is planning on boosting the power output further than that, but it seems unlikely. In any case, power is sent to all four wheels through the eight-speed AMG Speedshift dual-clutch transmission with the help of the 4MATIC+ all-wheel-drive system featuring the AMG Torque Control system.

The mid-lifecycle update of the second-gen Mercedes GLA is expected to debut in early 2023, with the updated AMG-branded GLA 35 and GLA 45 likely included in the presentation. Mercedes will show the facelifted A-Class range earlier than that – probably in late 2022 – which means that we will get a good idea of the forthcoming updates in the closely-related GLA.