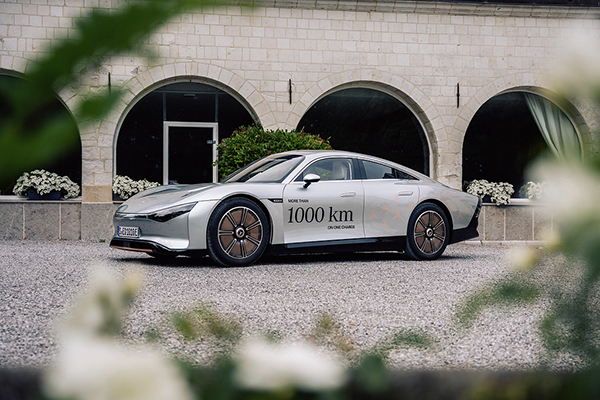 Two months ago, the Mercedes Vision EQXX demonstrated its extraordinary efficiency by managing to cover more than 1,000 km from Sindelfingen in Germany to Cassis on the Côte d’Azur via the Gotthard Tunnel, the Swiss Alps and Northern Italy.

The performance was even more valuable as the temperature along the route was between 3 and 18 degrees and the Vision EQXX had to cross mountains. It is known that battery performance is affected by temperature and that energy consumption increases when you drive uphills.

Therefore, it was obvious that the Mercedes Vision EQXX has even greater potential for savings. To demonstrate this, Mercedes has now re-done the consumption and range test with the EQXX in summer conditions.

The result is impressive. Compared to the 1,008 km travelled between two charges in April, the Mercedes Vision EQXX has now managed to cover 1,202 km in one trip from Stuttgart to Silverstone.

The chosen route was from Stuttgart to the north of France and Calais where the car embarked to pass through the Eurotunnel. The journey continued across the UK, along the M25 London ring road to the Mercedes-AMG Petronas F1 team headquarters in Brackley. From there the journey continued to Silverstone, the final point of the route.

There, the Mercedes Vision EQXX met the Dutch driver Nick De Vries who has won four races for Mercedes in the last two years in Formula E.

De Vries drove 11 laps around the racetrack at the top speed of 140 km/h , consuming the last bit of energy from the 100 kWh battery and increasing the record range to an impressive 1,202 km.

The temperatures were higher this time, reaching up to 30 degrees. Therefore, the drivers turned on the air conditioning in 8 hours out of the 14 hours and 30 minutes. In addition, the Mercedes Vision EQXX had to cope with the heavy traffic near Stuttgart and in southern England.

After the end of the test, the Mercedes Vision EQXX continued its journey to the Mercedes-AMG High Performance Powertrains in Brixworth located 33 km from Silverstone where the battery was charged and the car was prepared to participate in this weekend’s Goodwood Festival.