You are now seeing the best images we got so far from the VISION EQXX. Mercedes-Benz named its concept as the most efficient vehicle it has ever created. It could also say it is one of the sexiest ones – if the profile is not fooling us somehow. With a digital presentation scheduled for January 3, the new electric car will also be exposed at CES from January 5 until January 8. 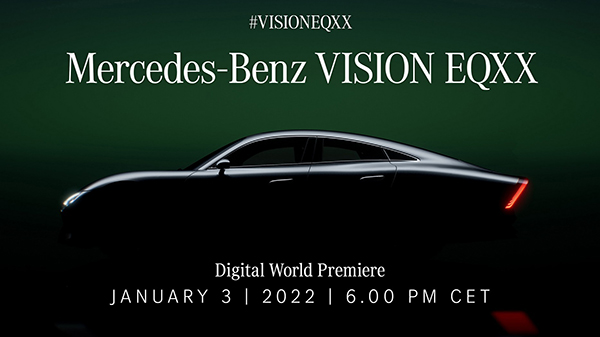 Mercedes will start 2022 with a bang by unveiling a new all-electric concept called the Vision EQXX. There are very few details about the new model, though a teaser image shows off a sleek and swooping four-door car. It looks long and slippery, though we will have to wait until January 3 for its world premiere to learn all about it.

Mercedes says the Vision EQXX, a “software-defined research prototype,” is the most efficient vehicle the brand has ever built. That means we could see the model arrive with a drag coefficient of less than the EQS’s 0.20, which is its most aerodynamic series-production vehicle. The EQXX is designed to push through technological barriers around efficiency, and Mercedes does that by “rethinking the fundamentals.”

The company isn’t specific on how it achieves this, though the concept has a “cutting-edge electric drivetrain” paired with lightweight engineering. The car also includes advanced software and “a barrage of intelligent efficiency measures.”

We can’t see much of the car, though the shape evokes flashbacks to the company’s 2015 Concept IAA, which featured a similarly shaped roof and aerodynamic rear end, though there are distinct differences. The EQXX’s rear overhang doesn’t appear as long, and it features far more definition over the fenders. The Vision’s front end starts low to the ground, and the windshield is a bit more upright than on the 2015 concept.

We’ll get to see how close the Vision EQXX looks to the Concept IAA on Monday, January 3, with the EQXX’s world premiere. The concept could preview the brand’s next steps in its electrification efforts as the company continues to shift toward EVs. If the Vision EQXX is like other Mercedes concepts, it could preview a future production model, though that’s just speculation. However, we should see the technology come to fruition in the following years.