Introducing the Hammer. Mercedes-AMG’s first E-Class with a V8 engine. The craziest coupé with attitude caused uproar upon its release in 1986, with a sound that defined a decade.

The Hammer – Unique and Unrivalled By Mercedes-AMG

Given how its AMG Month here at autoevolution, we could not forget about one of the older AMG models that made the headlines way back in 1980s. The German muscle car even frightened the American Corvette or the more slick and athletic Porsche 911 Turbo. An European version of a hot rod, if you like, with a massive V8 at the front, a luxurious all-leather cigar lounge-like interior, a limited-slip differential, and a wide body kit with custom lip spoiler to prove that AMG does not put its badge on anything less than incredible machines.

The Hammer’s unique legacy is celebrated by a recent AMG ad that teases its formidable V8 sound and striking appearance, which set it apart from all its rivals. Hardwired today in the AMG DNA, that philosophy carries on even in their most recent models. “The craziest coupé with attitude,” they say, and we can more than agree. It represented an engineering exercise and a turning point for the Affalterbach-based firm, which later became an adored Mercedes-Benz crown jewel.

Back then, at a time when BMW released the M5 concept in 1984, the petrolheads at AMG felt there was a challenge to be met. So they met it. The base platform for the Hammer project was the Mercedes Benz E-Class W124, more explicitly the 300E for the American market and the 230E for the European one. 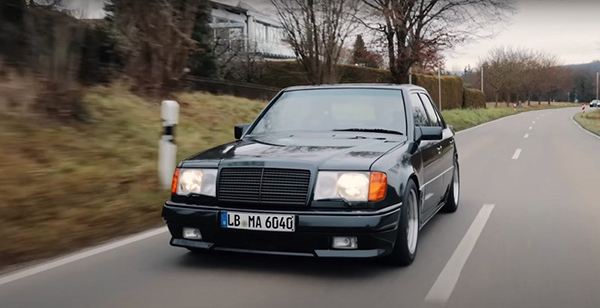 They had the mad idea to transplant the heart of the luxurious W126 Mercedes 560 SEC barge, namely its 5.6-liter M117 V8 and put it into their mid-size sedan. A recipe that seems like to the one used on the M5, but they aimed for a far more unique approach to high-speed Autobahn cruising, so they went as far as boring out the engine to a 6.0-liter capacity, recalibrating the 4-speed transmission valve mechanism, and adding a Torsen limited-slip differential, the largest available for that time.

All this engineering effort translated into remarkable stats on paper, and even more impressive performance on the road. The vehicle developed 355 hp and 388 lb-ft (526 Nm) of torque. Believe it or not, that was significantly more than the Corvette, a sign that the Germans meant business. Moreover, it could reach more than 190 mph (305 kph), leaving the 180 mph-rated Testarossa to eat its dust. Not least, the German cigar lounge could be propelled from standstill to 62 mph (100 kph) in less than five seconds.

Styling-wise, the Hammer improved on the delicate proportions of the W124, first imagined by the genius Bruno Sacco, then the Design Director at Mercedes-Benz. The AMG body kit consisted of a blacked-out menacing front grille, low bumpers and side skirts, flared fenders, and a boot spoiler with the AMG emblem stamped on. These improved the vehicle’s drag coefficient from an already commendable 0.29 to an even better 0.25 ratio.

Interesting fact, the vehicle was full of AMG signature badges, but no Mercedes ones. The moment you stopped and gazed at this angry machine, you realized that the three-pointed star was utterly absent from the picture. Remember, it was only in 1993 when Mercedes officially acknowledged AMG, seven years after the first release of the mighty Hammer. 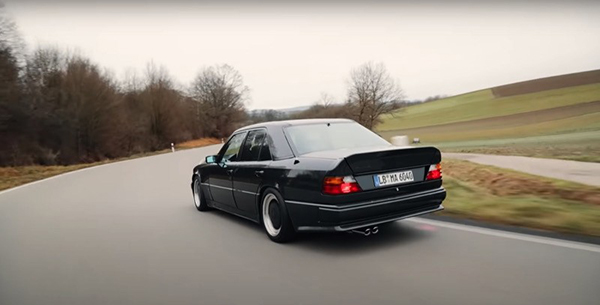 The living space inside the vehicle was also one of a kind. The seats were covered in a soft and comfortable stitched leather, the backseats resembling a five-star hotel couch. The front occupants benefited from their great support and heavily bolstered architecture, sophisticated 19-way adjustable settings.

For such an extravagant machine, the thick leather-wrapped AMG steering wheel offered remarkable driving feedback. Furthermore, the interior space emanated elegance through every button press, every woodgrain insert, and even though its classic instrument gauges, timeless pieces similar to any luxury watch from that era.

Sales figures for the AMG Hammer were not high, and that also means it may very well be one of the rarest models the German firm has ever worked on. Supposedly, around 13 were sold in the United States, and another 10 to 12 vehicles found lucky owners in other parts of the world.

It represented a statement, an engineering exercise from a brand that made headlines in racing championships because of its engineering expertise. The Hammer caused a worldwide stir in the automotive industry and is partly responsible for the 200-mph 4-door-sedans we all take for granted today. For many classic car enthusiasts, it represents the holy grail of German high-performance engineering.