Set aside the desire for a C43 or a C36, because this C37 RS has something they don’t–a third pedal! 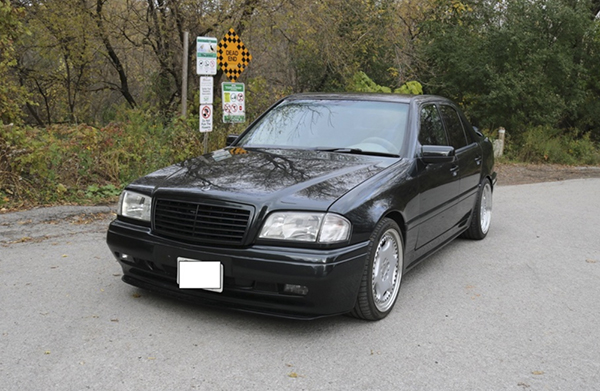 Over the years, AMG has had a Lewis Hamilton level win rate. Just about everything they pump out is epic. But they haven’t always had wins. The GLE 63 AMG is a great vehicle, but with a little bit of an identity crisis. The R63 AMG is… beloved for it’s uniqueness. But where AMG has really missed the mark is power delivery. They haven’t made a gosh darned automatic in their entire run up from the late ’90s onward. But Carlsson did.

Seen here is their creation, the Carlsson C37 RS. Much like the cars that came from Großaspach, the C37’s numerals designated engine displacement. In this instance the M104 inline-6 was punched out to 3.7-liters. On tap is 336 PS, which works out to a tick over 330 horsepower. Torque is stated to be 400NM, or about 295 lb/ft of twist.

By the way, those units indicate the car wasn’t intended for American soil. The fact that we found it on Canada’s AutoTrader further enforces that fact. But import laws mean this 1995 model is ready to stamp its passport to the US if the right buyer is out there.

Most importantly, the one missing trait from the C36 and the C43 is found in the C37 RS; a 5-speed manual. W202’s came standard with five driver-selected forward gears overseas, and we’d imagine this is plucked from that stock. Mercedes does typically have strong transmissions, which leads us to believe it could easily handle the 3.7 liter’s output. Additionally, Carlsson went and stamped their name on just about every surface of the car. Wheels, door cards, seatbacks, door sills. Just like AMG would later do.

But the C37 RS highlights a glaring misstep from AMG. At the boom of DTM and the German car wars, AMG only had to find a manual transmission solution for its most sporting cars. After all, AMG didn’t need to put a manual in something like the SL65 AMG. But having it in C-Class? Game changer.

It’s especially frustrating when you consider their competitors. BMW was busy taking itself too seriously with the M-cars, and Audi was putting timing chains on the wrong side of the engine.