During the Industry Pool at the Nürburgring I have filmed the 2023 Mercedes-AMG C63 Estate 2.0T Hybrid testing on track. Some prototype versions of the next-gen, W206 2022-2023 Mercedes-AMG C63 have been spotted, absolutely flogging around the Nurburgring in Germany, featuring the controversial new 2.0T hybrid powertrain.

The C63 will soon debut as the flagship version in the Mercedes-Benz C-Class family. However, the purists probably won’t be happy at all because the new performance C will have a tiny four-cylinder engine under the hood. The outgoing C63 from the W205 model family had twice the number of cylinders and twice bigger displacement.

Seen in this video testing around the Nurburgring in wagon form, the new Mercedes-AMG C63 will adopt an electrified 2.0-liter turbocharged engine. Supported by an electric motor, the mill will produce somewhere around 600 horsepower (447 kilowatts), which is a serious punch. However, as you can hear in this video, the powertrain probably won’t generate an appropriate soundtrack as expected from a C63. 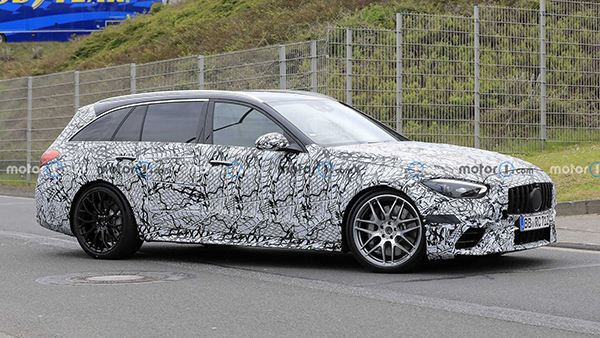 Performance-wise, it’s difficult to predict how capable the new top dog in the C Class family will be. We are hearing it will be offered only with a nine-speed automatic gearbox. You probably think ditching the V8 would result in a weight diet for the new C63, though considering the hybrid-related hardware, we actually believe the new generation will be slightly heavier than the model it replaces.

Just like before, the range-topping C Class will continue to be available as both a sedan and a wagon. The latter will go directly against the first-ever BMW M3 Touring, coming later this year with a 3.0-liter inline-six turbo engine. The two cars are expected to have similar performance capabilities and we are eager to see the first drag races between the fastest wagons from Bavaria and Stuttgart.