The Mercedes-AMG team posted a video thanking its crackerjack staff across numerous race series’ for a triumphant year. After blitzing through captioned names over various AMG vehicles driven like they were designed to be, the final two seconds (at 2:16) are devoted to the rear end of a prototype AMG GT 4 Door. With nothing to give away the model, the car looks like the current flagship GT 63 S. However, when the car pulls away from the camera, only the cooing of an electric motor can be heard. It’s thought that AMG has teased its impending top dog, the GT 73 that turns the four-door concept shown at the 2017 Geneva Motor Show into a production offering. As on the concept show car, the 73 series is expected to get a twin-turbo 4.0-liter V8 powering the rear axle, an electric motor on the front axle, and a combined output of around 805 horsepower and 738 pound-feet of torque. The predicted model name: AMG GT 73 4Matic.

THIS IS FOR OUR AMG TEAM! Thanks for your incredible performance throughout the whole year, full of exciting moments and your inner drive to always achieve the best. A big THANK YOU also to the Mercedes-AMG family and friends for your support in 2019.

The coming fury resurrects the “73” moniker birthed on the fourth-generation, RL129-series SL73 AMG. Produced from 1999 to 2001, the true-to-displacement nomenclature came from AMG taking a Mercedes-Benz 6.0-liter V12 that put out 389 hp and 420 lb-ft, and boring it out to 7.3 liters and increasing output to 518 hp and 553 lb-ft. Rumor says AMG only made 85 of the SL73, each one for an owner who had already purchased an SL600 and then transferred an additional $50,000 to AMG for services rendered. Rumor also says that the Sultan of Brunei took delivery of 50 of those 85 cars. AMG would redesign the engine for use in high-performance applications, then hand it over to serve Horacio Pagani, who tuned it to 750 hp and 575 lb-ft in special editions of the Zonda 760. 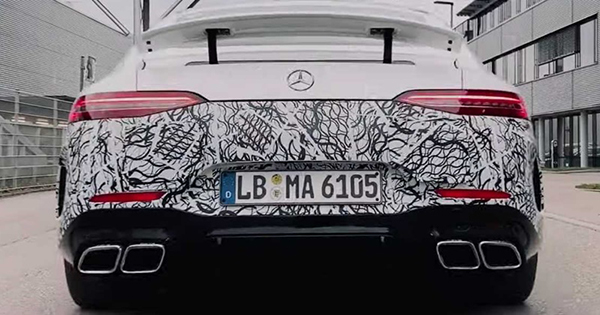 Australian outlet Car Sales claims AMG is bringing back the nameplate, if not the displacement, “with the sole intention of [the GT 73] becoming the most powerful (and quickest) production four-door car of all time.” As a reminder, the GT 63 S makes 630 hp and 664 lb-ft, gets to 60 miles per hour in 3.2 seconds, and maxes out at 190 mph. The quoted figures for AMG’s new child eclipse the 671-hp Porsche Panamera Turbo S E-Hybrid, and with the AMG’s blitz to 62 miles per hour predicted to happen in under three seconds, the GT 73 could outdo the Porsche by 0.4 seconds or more. As a PHEV, the GT 73 might turn out to be the most fuel efficient AMG GT 4 Door in the range, with a potential all-electric range of 31 miles on the European cycle.

There could be more, too. Daimler trademarked three “73” model names in Europe in late 2017 – G 73, GLS 73, and S 73, doing the same in Canada in early 2018. The the 73 powertrain has also been predicted for the next SL, which AMG is developing, and mooted as a possible engine for a resurrection of the Mercedes-McLaren SLR. The debut date remains unknown, but don’t be surprised at a Geneva reveal in early March.