The 2020 Mercedes-Benz Sprinter comes in a nearly uncountable number of variants. Whatever your needs are, there’s probably a configuration that’ll do the job. We happened to spend a week in a 3500XD Crew Van with a high roof and 144-inch wheelbase. Decked out in all-black, the van was impossible to miss. 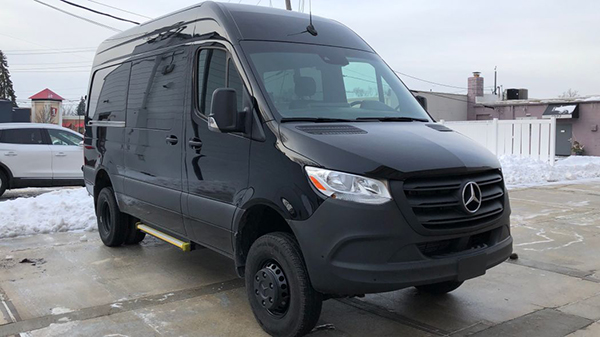 A 3.0-liter turbodiesel V6 sends 188 horsepower and 325 pound-feet of torque to all four corners. It’s mated to a seven-speed automatic gearbox. Europe can get three-pedal Sprinters, but those aren’t available in the U.S. Our tester had the $7,800 Low and High Range 4×4 Package tacked on that adds exactly what you’d expect: a 4×4 high range with a low-range transfer case. We didn’t hit the trails, but this van sounds like an adventure waiting to happen with its high ride height and true four-wheel drive. It seats five and has a massive rear storage area behind it. The 5,000-pound towing capacity should allow enough overhead to tow whatever you couldn’t fit inside the high roof van to begin with.

Before any of the extra goodies, our Sprinter started at $51,885. Its final price rang in at $71,496. The $2,530 Premium Plus Package added the MBUX infotainment system with a 10.25-inch touchscreen, navigation, adaptive cruise control, wireless phone charger, leather steering wheel and an instrument cluster display. A $1,240 Premium Package adds a rear view camera, lane-keep assist, rain-sensing wipers and an active brake assist function. Then the $1,210 Driver Convenience Package adds the multifunction steering wheel, blind-spot warning, heated/electronically-controlled mirrors, a 12-volt power outlet and a number of other trivial features. The electric sliding step costs $1,014, and the illuminated front exits were a cool $143.

Senior Editor, Green, John Beltz Snyder: This Sprinter is surprisingly easy to drive. The wonderful visibility and huge mirrors help, but it’s not nearly as unwieldy as I expected. It’s not slow, either, and I had no trouble mixing it up with traffic in the city and on the highway. The ride isn’t bad, about on par with a Ram Power Wagon, and far more comfortable than a Ford dump truck we had awhile back.

The dichotomy of stripped down van and high-tech, luxury Mercedes was funny. It has adaptive cruise control, slick thumb controls on the steering wheel and a great infotainment system, but then there’s no artfulness to put it all into context. Thank goodness for heated seats, though. At 18 degrees, I had the heat on full blast for the first 30 miles of my commute into work. If you’re curious, I got just shy of 16 mpg. 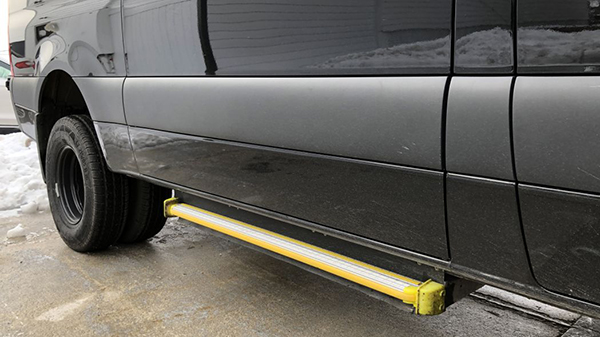 Obviously, my four-year-old loved it, calling it “so cool!” We ran around in the back for a bit, and I took him for some laps around the driveway. Now I’m entertaining dreams of decking one of these out as a badass off-road camper.

Road Test Editor Zac Palmer: I hopped out of a 2020 Porsche 911 Carrera 4S Coupe and directly into the driver’s seat of this lifted Sprinter. The transition was … harsh. But the visibility was utterly fantastic. That massive windshield and the huge windows make such a large vehicle manageable to drive in rush hour traffic. I found it just as easy to pilot as John did, and the largeness melted away after a number of miles on the highway. 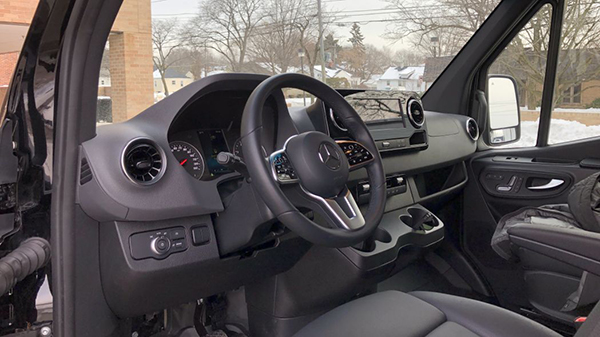 My favorite part of this van is how it looks. Whoever the genius at Mercedes is who specced a completely blacked-out, four-wheel drive, lifted, diesel dually has their priorities straight. I referred to it as the “Battle Van” throughout its illustrious week in the Autoblog garage (or rather, outside of it, because the roof was too tall to fit in the actual garage). Sprinters have never held any visual appeal to my eye, but an all-black paint job, black steel wheels, dark-tinted windows and black trim all around make this van look like it’s suited up and ready for World War III.

I wanted to hit the road to the middle of nowhere with my life in the tall cargo area as soon as I laid eyes on this Sprinter. With the extra ground clearance and true four-wheel drive, this van will be unstoppable on some gnarly trails so long as height isn’t the limiting factor — the center of gravity cannot be good. I can imagine rolling up in this at a national park campsite and being the most badass vehicle on the campgrounds. This thing is sweet, so long as you have a legitimate need for its capabilities. At least we know which van to aim for in the apocalypse now. 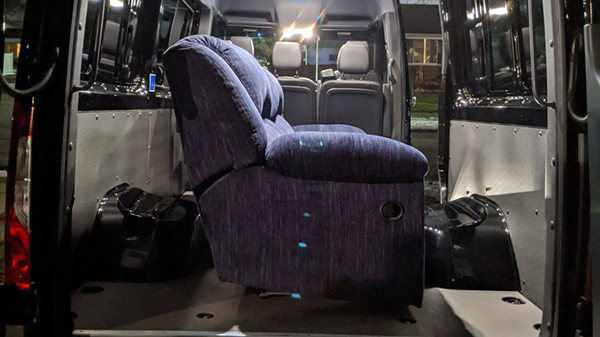 Associate Editor Byron Hurd: Oh, boy.
It’s virtually impossible for me to be impartial about this thing. My father owned a rear-wheel drive Dodge Sprinter 2500 with the five-cylinder diesel back during the Daimler-Chrysler days, and I got quite a bit of seat time in it. We used it as a camping vehicle, moving van and occasionally just a good, old-fashioned means of get-around transportation.

I hated that thing, but it sure was useful. At times.

This 3500XD has a serious leg up on my dad’s old Dodge in terms of both capability and comfort. His base-model, short-roof, short-wheelbase model was quite maneuverable; this one is less so, but not by the margin I expected given the 4×4 drivetrain and dual-rear-wheel setup. This thing actually made it to the rear parking pad of my rental bungalow, even with its annoying (and as I’ve found in my brief time in the Detroit suburbs, ubiquitous) mid-driveway gate.

As many things as this Sprinter can do, there’s an equally impressive list of things it can’t, like fit into a parking garage or drive-through. Sure, you can mow down your own elk if you really want some dinner, but that’s not quite the same level of convenience afforded by, say, just about every factory pickup truck.

It is seriously cool, though. For what amounts to little more than a glorified cargo van, it’s pretty badass. 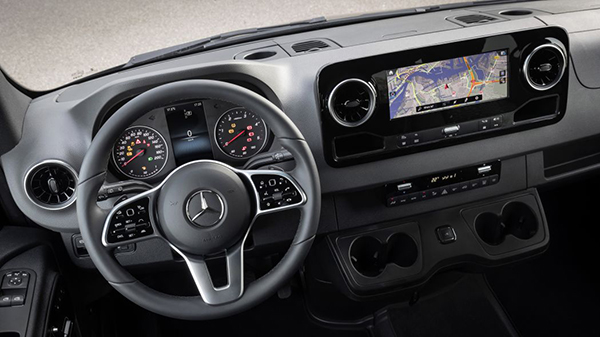 Editor-in-Chief Greg Migliore: I was almost chuckling to myself as I approached this imposing monster truck of a van. But get past the cartoonish vibes, and it’s hard to argue against its merits. Mercedes does big business around the world with its van division, and its recent focus on growing operations in the United States is a smart play. This 3500XD is a rolling showcase of all the things Benz haulers can do. By the time my stint was over, I wasn’t laughing at all. The Sprinter and its siblings are credible work vehicles in a vital segment.

I put the Sprinter to work. I was able to get a hulking couch into the back with room for a dresser laid across the row of seats. For good measure, I tossed in a headboard. I probably could have gotten another dresser in there. Suffice to say, I attracted a bit of attention at the Salvation Army drop-off. The next day, I drove my son to school in it, and he loved it. His rear-facing convertible carseat fit easily, and obviously, he had plenty of room. His (and my) only complaint: it was pretty chilly with temps in the low 30s on this day, and the Sprinter does not heat up quickly, if at all.

It’s fine to drive around town. I was fairly confident going through tight turns, and the visibility was solid. It was a bit jouncy when unladen, especially over the winter-ravaged Michigan roads. I actually thought it was better on the expressway at speed. Still loud, but it seemed a little more poised. I achieved as high as 19.1 mpg during one of my stints, which is impressive considering the sheer size of this thing. During another jaunt I pulled 18.1 mpg. Both figures came from the onboard computer, so I’m a little skeptical, but being in this range is respectable, considering the Sprinter 3500XD is so large it doesn’t even get rated by the EPA. I figured this macho van would be practical, but I genuinely enjoying driving it.