Janis McDavid was born without arms and legs, but that doesn’t stop him from getting around. He drives a custom Mercedes Sprinter van that gives him freedom and independence. Mercedes posted two videos of McDavid and his van to its YouTube channel, showing off not only how he can go anywhere, but also how he operates the van with custom controls.

A tour through a converted Sprinter: solutions for self-empowered mobility by Mercedes-Benz Vans

McDavid accesses the van with a control panel on his wheelchair. The rear doors open automatically, and a lift opens and extend. Once lowered, he drives onto the ramp, which then raises so he can drive into the back of the van where he parks and secures his wheelchair. He then closes the rear doors, grabs the keys, climbs out of his chair, and heads to the front where he sticks the key in a custom ignition switch located in front of the van’s center console. A custom step helps him climb up into the driver’s seat.

A Sprinter conversion for freedom: Janis McDavid won’t be handicapped by Mercedes-Benz Vans

Once he secures his seat belt, he starts the car, which runs a diagnostic test on the controls before he takes off. A control panel on his right allows for various functions while a small control panel above that houses the gear selector. On his left side, there’s a joystick that allows him to control the van. Steering is done by pressing it left or right. The stick allows controls accelerating and braking, but not in the way you’d think. Backward on the stick is the gas, and forward is the brake. It’s a safety mechanism to prevent McDavid from accidentally accelerating under braking if he leans forward. 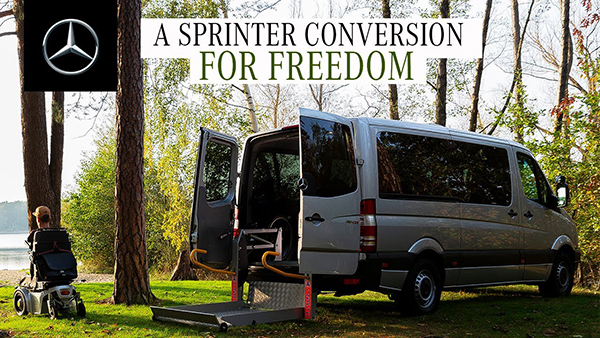 “In life, ones should not focus on problems, but on possibilities,” McDavid says in one of the videos, and that’s what he’s done. Technology can do great things for many people if we focus on solving problems and eliminating hurdles. To McDavid, driving a car means more to him than pure freedom and independence.