More than anything, Sidney Vallon is an automotive enthusiast. Founder of the Palm Beach Concours – which kicked off its inaugural showing in 2019 – and owner of Palm Beach Classics, Vallon and his team have been restoring and selling classic Mercedes-Benz vehicles in South Florida for nearly 15 years. 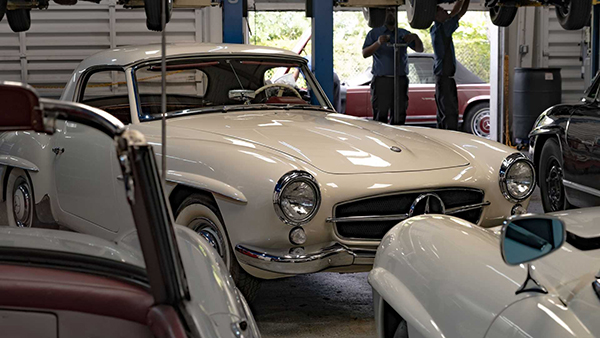 As one of the largest Mercedes restoration shops on the east coast, and an authorized dealer, Palm Beach Classics has a collection of cars that any certified Stuttgart enthusiast would fawn over; 300 SL Gullwings, 220 SEs, S80 SLs, and a few gorgeous 190 SLs like the one pictured here.

And walking into the Palm Beach Classics main showroom is like stepping into a miniature Mercedes museum all its own. Those beautifully restored Benzes sit behind velvet ropes, models ranging from the mid-1930s to the late 1970s. But just a few yards away from the main showroom is where all the magic happens: the shop. That’s where these cars have either already received or will soon undergo a full restoration from the Palm Beach Classics team. 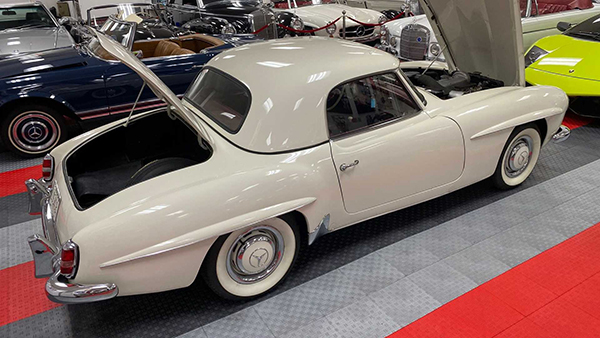 I spent the morning with Sidney exploring his shop and checking out one model in particular: a 1957 190 SL. On this surface, at least, the SL in question doesn’t look all that battered. The paint is relatively nice, the interior is worn but not unusable, and the chrome surrounding the headlights and grille still has some sheen. But Sidney has an eye for detail, and he quickly points out a number of wrongs that he and his team need to make right.

“Normally there’s a marking here that says Bosch…” Sidney says as he runs his hand over the chrome headlight surrounds, “as you can see, it’s missing. This is very important.” He also notes the gap between that same chrome surround and the bodywork, a barely perceptible half-inch space that most people would quickly overlook. 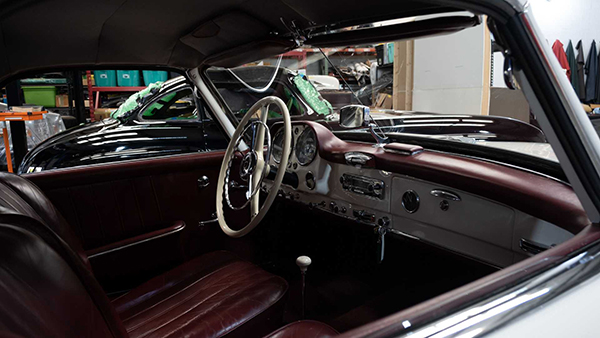 In more obvious need of love is the rusty underbody, which Sidney assures me isn’t a big deal. And the worn interior needs a full re-upholstering, which may or may not return to factory spec. Originally this SL rolled off the floor in Stuttgart with a 1078 green color-coded leather, rather than the classic red seen here. Even the roof was distinct, finished in Anthracite Grey instead of white. 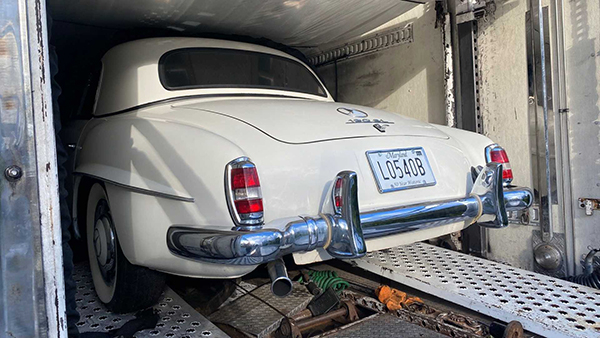 Between removing body panels, de-trimming, and a full interior rehab, each project takes anywhere from 12 to 15 months to complete. Not to mention the engine rebuild, which is done outside of the shop, while the Palm Beach Classics team makes sure to pour over the transmission and other powertrain components to ensure everything is in working order before returning it to the owner.

As it sits, this gorgeous SL is still in the very early stages of completion. Vallon and his team have done the initial walkaround and have put pen to paper on exactly what needs to be done.

As the months persist, there should be huge improvements to the SL ahead of its finished date sometime early in 2023. As I was curious to see the progress, Vallon invited me back for updates along the way. So I’ll be sure up with Sidney and his shop’s progress on the SL in the meantime.