Every bride wants to make her wedding day special. One way to do that is to forego the traditional limousine and drive yourself in a classic Mercedes 190 SL. That is a stylish way to show up for your big day. That of course assumes that you show up at all. Driving a Mercedes to a wedding is nothing new. But having the car burst into flames on the way, thankfully, doesn’t happen very often. Still, for one unlucky bride in the UK she faced this exact scenario. 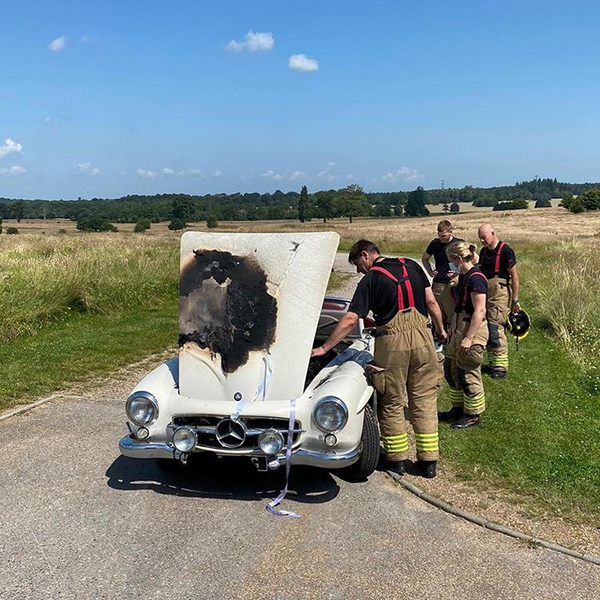 It was a glorious day in Hook, Hampshire, UK. Although it was a bit warm for that part of the world as the temperature hit 86 degrees Fahrenheit in the area. The bride was just a few miles from the hotel where she was about to get married when the unthinkable happened. Fire erupted in the engine bay and quickly engulfed the front of the car. From the pictures you can see that the fire caused considerable damage to the engine and hood of the beautiful Mercedes. The fire department was called but by the time they had arrived the flames were already extinguished. There are no details on how the fire was put out.

Luckily nobody was inured in the incident. And the bride did make it to her ceremony. Although maybe a bit more fashionably late than she had planned. To add insult to injury for Mercedes fans, the bride was picked up in a modern BMW to complete her journey. That is a shame because even a half-burned 190 SL has more style than any modern-day BMW. Well, if nothing else this newly married couple will have a one-of-a-kind story to tell for the rest of their lives. 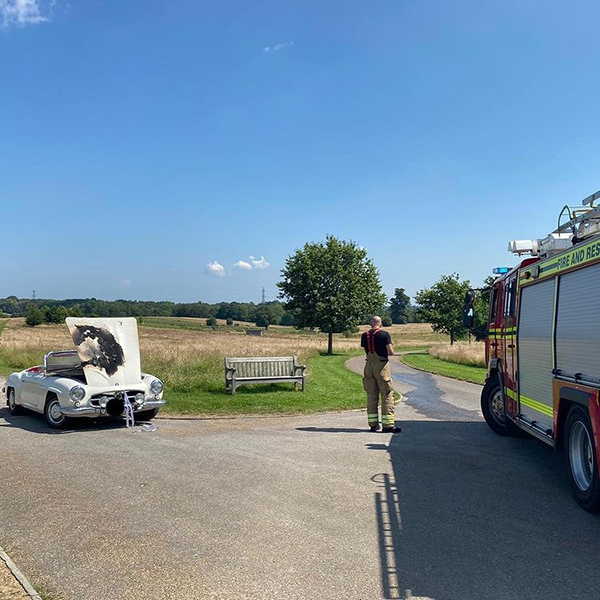 Photos from the scene were posted to the official Instagram channel for Hampshire and Isle of Wight Fire and Rescue Service. They were the company that responded to the scene and saw what was likely their first charred 190 SL. Wonder how that call sounded over the radio? Woman wearing a wedding dress is standing next to the side of the road watching a classic Mercedes burn in front of her. The dispatcher may have thought it was all a joke. It wasn’t.

We know the classic Mercedes 190 SL is a lovely car. But perhaps the bride was asking a bit much of it on this hot day. Maybe a 190 SL with a bit more modern running gear would have faired better. Either way, if you are going to use any make of classic car to take you to your wedding day, you might be wise to bring a fire extinguisher along for the ride.