Her Majesty’s Secret Speedster
The Mercedes-Benz 190 SL debuted in 1955, one of the initial Mercedes-Benz models to come out of rebuilt factories that were destroyed in WW2. Debuting stateside at the 1954 New York Auto Show, the car was among the first to meld roadster performance sensibility and a luxury lifestyle. As such it was marketed not necessarily as a race car but, rather cleverly as a “sports tourer.” 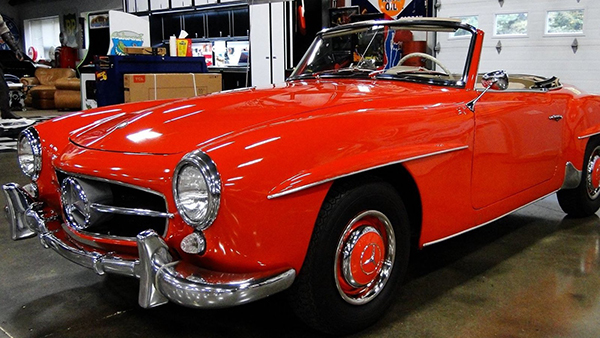 Red Devil Dawn
Just over 10,000 of these cars —10,368 to be precise —were imported to the American market. Just how many remain is a matter of debate, but it’s like less than a thousand. This particular model has a fire engine red paint job, which, while restored, is identical to its original hue. The tan-colored soft-top convertible roof makes the glossy red paint a little less severe while adding to the car’s vintage look. Thin chrome bumpers allow the eye to separate the higher front and lower rear wheel wells. 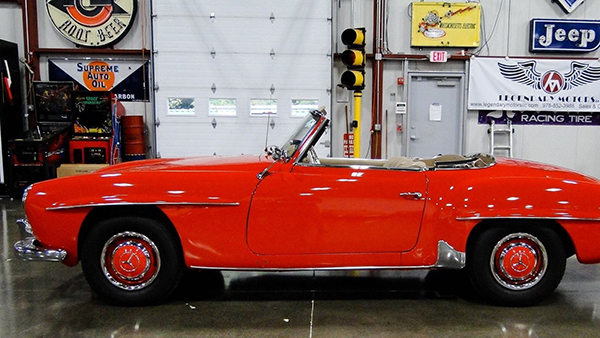 Sporting Society
The car’s front-engine or “FR” layout was relatively new for Mercedes-Benz at the time. The engine is enclosed in an elongated front hood which features a spectacularly ornate chrome bumper. The famed Mercedes-Benz logo is constructed within the grille, which is bordered by two chrome-wrapped spherical headlamps —a classic sports car look that has inspired numerous imitators. 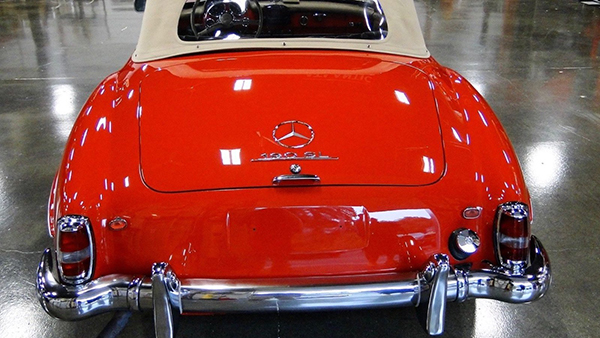 Vintage Vroom
The car’s 1.9-liter single overhead camshaft inline four-cylinder engine has been restored and has service records dating back to 1994. Mercedes-Benz’s pioneering inclusion of its newly developed fuel injection system and the car’s tubular space frame are just two of the notable engineering feats found in the 190SL. 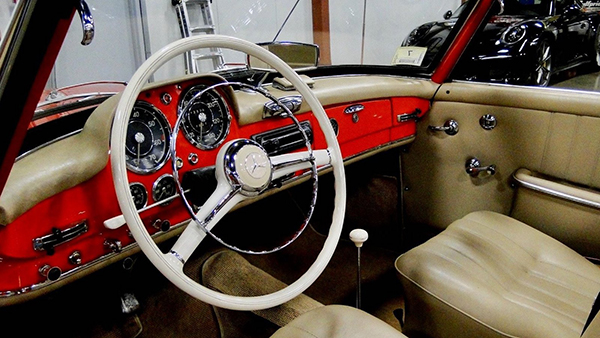 Substantive Sophistication
The car’s interior is somewhat Spartan even for the late 1960s. The fire engine red exterior extends to the dash and plays nicely off the cream-colored interior. One facet of the interior was a precursor for future automotive interior designs: dual heating sections for both driver and passenger. 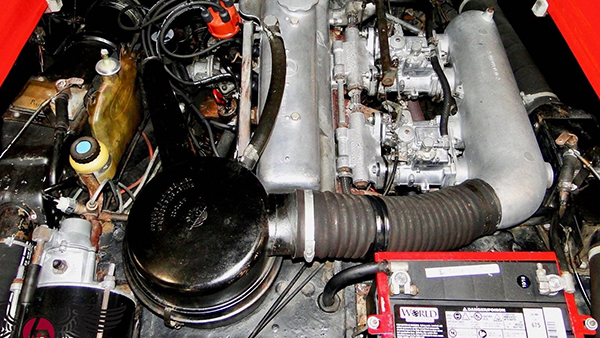 Model Class
Marketed as sporty, but in design and function more like a sedan, the 1963 Mercedes-Benz 190SL holds a place in both the brand’s automotive history. That said, thanks to the high production quality, Mercedes-Benz 190SL’s from this era are notoriously difficult and expensive to restore —which makes this particular vehicle stand out well ahead of similar roadsters from the era.