In this video, I make my Twin-Turbo V12 Mercedes sound like a fighter jet with a prototype intake! I also fix the leaking ABC hydraulic suspension again and I repair a common wiring issue on the 215 chassis CL Mercedes. Oh and we also do CL65 AMG fly-bys, boosted launches and burnouts! Enjoy!

I Made My Twin-Turbo V12 Mercedes Sound Like A FIGHTER JET With A Prototype Intake! CL65 AMG!

We all know the CL65 AMG is a potent machine. With its twin turbo M275 engine, it has enough tire shredding torque to make a set of tires last for just minutes. But what it doesn’t have is noise. That issue is addressed by YouTuber LegitStreetCars in their latest video, with host Alex Palmeri adding a one-off prototype intake to his C215.
Victory Road Performance has made this prototype intake for Palmeri, and he’s been willing to try it out on his car for fitment and development. And for fun, of course. “I’m going to be checking it out for sound in this video, and eventually for performance,” Palmeri notes.

Installation is easy, but unfortunately you have to lose the AMG plaque and the carbon fiber air box. But what you do get is turbo and blow off valve noises. And, that’s worth it! On throttle Palmeri says “alright guys, it’s not crazy loud, but it definitely sounds really cool.” 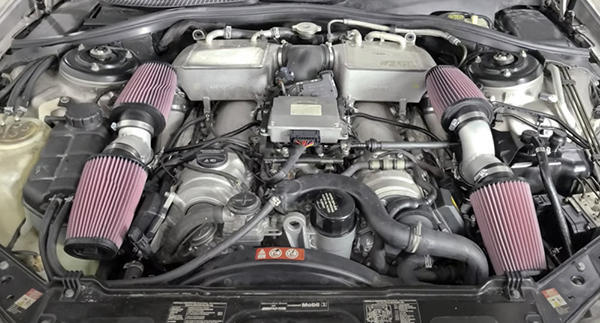 Performance wasn’t tested because Palmeri still needs to bring the car to a dyno. But while there, there will be a little bit of science going on. From the factory, the CL65 has a cold air intake. But the VRP intake is essentially a hot air intake. Counter intuitive? Not exactly. For a normally aspirated engine, cold air intakes are beneficial, but for anything with forced induction, it might not have as high of performance.

Turbo cars like the CL65 have an intercooler which cools down charged air from the blower before it gets to the intake. So inducing hot air would be mitigated within the system. In this instance short ram intakes provide the least air restrictions in the system, and offer a greater performance advantage than cooler denser air. Volume over efficiency here.

Palmeri has some maintenance to perform on on the V12 before it hits the dyno, but it will be interesting to see if there’s any gains – or losses – from this new intake.