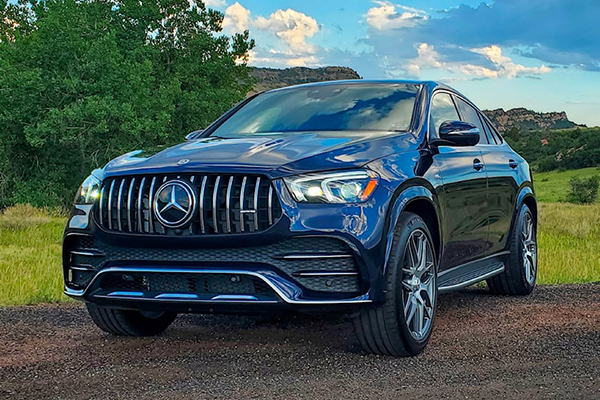 But, the keys to the latter landed in our lap, a $94,000 SUV (as-tested) with a cut-off roofline that impedes visibility, cargo-carrying capability, and rear passenger space. And despite that nearly six-figure price, this isn’t even the most absurd version of the GLE Coupe.

Remember, there’s an AMG GLE 63, which packs a 4.0-liter, 603-horsepower V8. Sans V8 noises, we wondered if our car’s 3.0-liter turbocharged inline-six would make the cut as we set off. In a hotly-contested segment, this Mercedes had both the full weight of its competition and the opinion of the enthusiast community working against it.

Exterior: Handsomely Controversial
The photo you’re looking at below is arguably the most controversial part of this car’s design. The coupe part of that ridiculously long name means you lose a few cubes of storage space in the back. Still, you get 33 cubic feet as compared to the X6’s 27 cubes. That said, transplant this look onto something without the letters “S,” “U,” and “V,” on it and you’ve got something the grumpy automotive community from above might consider rather handsome.

And the GLE is that. We love the little pseudo-Hofmeister kink on the rear glass, and the lights sat just behind it add a lot to the look. Right now, Merc is at the top of its lighting game. The little spoiler at the rear isn’t all that noticeable, but it does add something to the look if you take a second to stare at the car.

But the first things you’ll notice are the massive ($2,850) 22-inch AMG cross-spoke wheels. They’re huge, yes, but they complete the look, as does the Lunar Blue Metallic paint, which is significantly bluer than it appears in photos. 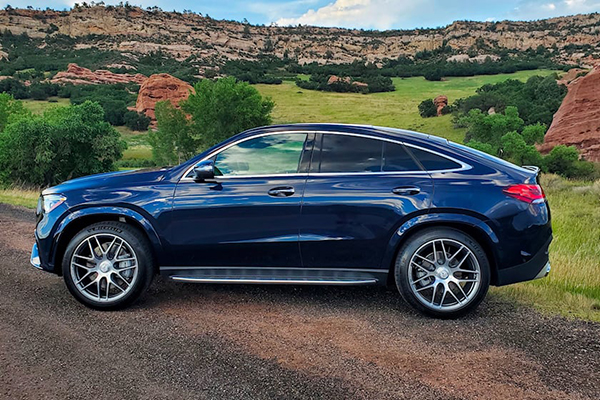 Performance: Smooth. Silky. Fast.
Predictably, a car with an AMG badge has a lot of performance in its grasp. In this case, motivation comes from a 3.0-liter turbocharged inline-six making 429 horsepower and 384 lb-ft of torque. That may sound paltry for a 5,000-pound car, but a mild-hybrid system known as EQ-Boost gives you 184 lb-ft of extra twist on demand pretty much anywhere in the rev range.

4Matic AWD helps put it all to the ground, and Mercedes has chosen its ubiquitous nine-speed automatic for the shiftwork. It does its job well, shifting when you need it to and, more importantly, allowing you to choose when it does, too.

Our test unit arrived with Merc’s AMG Ride Control+ suspension management system, which can be controlled through a Ferrari-style manettino switch on the wheel. The system is based on Mercedes’ widely-used Airmatic air suspension setup and has several modes for you to choose from.

That’s also true of the powertrain, which can be adjusted separately from the ride quality. Between these two, plus Merc’s pre-programmed Eco, Comfort, Sport, and Sport+ modes, which add more aggression and more exhaust noise as you ramp up, the adjustability is near endless. 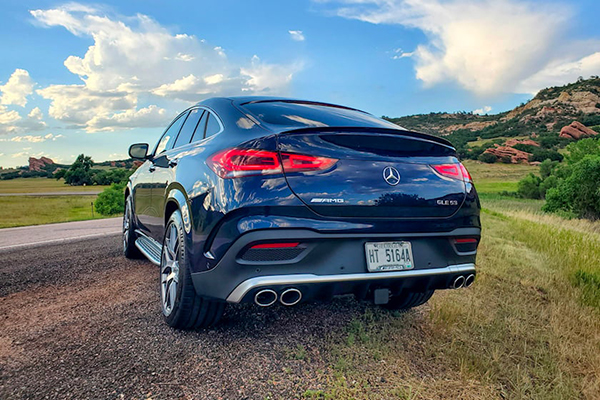 Driving Impressions: Physics? What Physics?
Regrettably, the exhaust note can’t be adjusted on its own in this ‘lesser’ AMG model, which is a pity since the straight-six has the ability to sing when you treat the GLE Coupe like a sports car but not as loudly as we’d like.

And treat it like a sports car we did on some of Colorado’s back roads; If Mercedes wanted to present this as a lifted five-seater with sports car intent, then we were going to drive it like a sports car. So, at the bottom of a favorite mountain, we switched to Sport+ and buried our foot into the firewall.

Doing so stiffens the dampers, slackens the driver aids, and hastens the car’s mechanical responses. Thankfully, the MultiContour front seats with massage ($1,100) were more than able to hold us in place through the bends.

We were thankful because this car sticks with its Michelin Pilot Sport 4S rubber being a big part of that. We need to have a chat with AMG engineers because the way this car manages its body weight is something linebackers could learn from.

You can set the car up, lean it in, and pick a line. From there, it’s all grip until the exit, at which point the inline-six lets out a quick bark on the upshifts while you reduce the previous corner to a speck in the rearview.

Good sports cars need a degree of tactility – an interaction to make you feel one with the car. But this being a family SUV makes some compromises in that department. The steering is weighty yet devoid of road feel. You can say the same for the noises this car makes. You’ll barely hear those inline-six barks because this is also a luxury car. 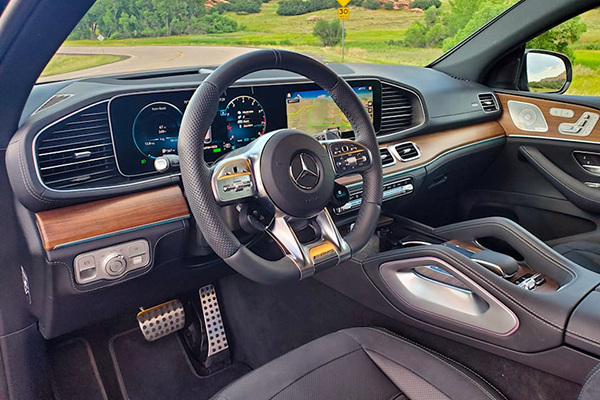 This doesn’t mean the AMG GLE is all lows, however. The brakes held up to a frankly absurd level of abuse. We ran 180-degree switchbacks up and down a full four times before brake fade became an issue. Hauling a car down from speeds that shouldn’t be capable from a family SUV in such tight confinesto 25 mph, and doing so with solid pedal feel and no complaints, is massively impressive.

The gearbox is another high note. AMG has set the tuning right on this one, and it’s more than fast enough for you to enjoy using. It’s not DCT-quick, but it’s always smooth, and almost as decisive as the best BMW has to offer.

Finally, that leaves us with the ride. In addition to stellar grip, Mercedes has found a sweet spot for canyon-carving in the Sport+ setting. A very small portion of these will ever see track time, so it’s probably for the better that there’s some give in the suspension, even when it’s cranked to the max. The car rides beautifully in all scenarios.

Very few cars have made us turn around for a second pass at our 20-mile drive route through the Rockies. The Nissan Z did. So did the BMW M240i and the Mazda MX-5 Miata. This is so far the only SUV that can stand in that club with those sports cars, which is more a testament to the perverse pleasure one gets from manhandling a vehicle that shouldn’t be able to do this and yet does with aplomb.

Having driven the pants off the GLE, it was time to reflect on how the car did around town. Thankfully, it’s a full hour back home with a mix of crap roads, busy highways, and long empty mountain roads between us and home.

This is where those compromises we talked about earlier pay their dividends. The GLE is superb around town, but we had a few gripes. First: visibility. This isn’t really Merc’s fault. Modern crash regs have led to high beltlines, and SUVs are naturally tall. The result is parking while craning your neck out the window or fumbling for the cameras (which need a hard button shortcut like in the Bronco).

Second: MBUX is great, but the search function is not. We regularly found the map out of date when searching for local businesses, like the new Target near us. For such a good infotainment system, this is a glaring fault. The voice recognition is also a bit weak.

Finally, those expensive seats aren’t really worth it. They’re nice, sure, but the massage function just isn’t very powerful. This problem isn’t exclusive to Merc either, mind you. In that vein, we’ve yet to meet a European automaker that does some solid ventilated seats this side of Bentley.

The pros are solid, however. Around town, the inline-six is in its element, and the EQ-Boost hybridization is sublime. This is one of the smoothest sixes on the market right now, including the one in the BMW X7 we drove just after this.

Refinement and insulation was another pro; you won’t hear much inside, save for the Burmester sound system. There are better sound systems, but not at this price point.

Use of Driver Assistance Package Plus and HUD, priced at $1,950 and $1,100, respectively, meant getting around was just about as luxurious as you can get this side of six figures. Everything works flawlessly, and the auto-braking even saved us from a potential accident. 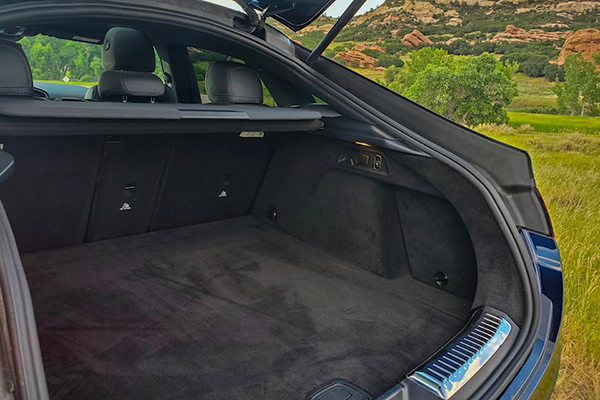 Interior: Sub-$100K Luxury Barge
The MBUX infotainment interface is a big part of modern Merc interiors. It’s great, aside from the issues we touched on above, and wielding the GLE 53 is both an easy experience and a premium one. Things look and feel nice, and we still think Merc’s ambient lighting is the best in the biz. The wood in the GLE felt incredible, but we did notice some squeaking when we pushed on the trim panels. That could get worse as these cars accumulate miles.

A true highlight of the cockpit is the AMG-specific wheel. Like Audi, Merc has really figured out how to shape a wheel. The paddles fall nicely to hand, and the touchpads for MBUX are still great for navigating. We do wish you could see the HUD better with polarized sunglasses glasses on, though, but this is an industry-wide issue and not Mercedes-specific.

A key area of contention is the space for rear-seat passengers. The rear seats aren’t as adjustable, but they still had more than enough movement in them to get comfy. The space behind them is still relatively usable as well. However, we wouldn’t shoehorn tall adults in the back for long trips.

While Mercedes relies on big screens, the vast majority of Merc’s climate controls are still buttons. Most functions can be adjusted via the panel below the vents, and those that can’t be are easily found in the menu (which has a hard shortcut).

Aside from the trunk, there’s plenty of space for your things inside the GLE. Yes, luggage space is plentiful, but we’re talking about small items. A favorite test of ours is the “Big Water Bottle Test.” The GLE has eight cupholders, all of which fit our Big Water Bottle. That’s pretty good, as other cars in the $100K-ish range can sometimes leave this simple bit of practicality out.

Thankfully, the GLE is a good SUV, because if it had been terrible, the segment would have been split by the other Germans. Instead, what we have here is the Goldilocks Coupe SUV.

Sure, we still want a sports car on that drive through the mountains, but if you need an SUV and a sports car and a people hauler and a commuter car, and a luxury car and, and, and, then the Mercedes-AMG GLE 53 is a pretty damn good place to get all that and then some.