When the Mercedes-Benz ML55 AMG debuted at the turn of the century, it seemed like an anomaly. The hot-rodded SUV raised the question, what was it for? Its sport suspension limited its on-road comfort, and for outright speed it made more sense to nab an E55 from which the wizards at Mercedes’ performance arm pilfered the 342-horsepower V8.

Two decades on, the idea of a high-performance SUV like the ML’s Mercedes-AMG GLE 63 S descendant is no longer strange. BMW, Porsche, Land Rover, Jaguar, Lamborghini, and even Alfa Romeo have come out with their own takes. Competition and technology have evolved and honed the concept into apex predators that would embarrass a Ferrari Enzo on paper, but that hasn’t made their purpose any more cogent.

As a machine, the 2021 GLE 63 S is an engineering marvel, a metaphor for man’s dominance over nature and physics in the year 2020. The official curb weight is still awaiting certification and has not been announced at the time of our test drive, but the GLE 580 rings in at a hefty 5,200 pounds and change. We expect the 63 to have a similar mass, and yet it rockets from 0-60 mph in a claimed 3.7 seconds, thanks to its 4.0-liter V8 twin-turbo spewing out an astounding 603 horsepower and 627 pound-feet of torque. 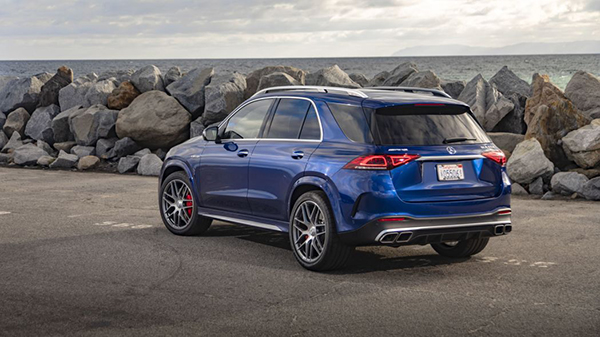 That figure doesn’t even take into account the innovative EQ Boost integrated starter-generator, an electric motor sandwiched between the engine and transmission. That can spike the engine with up to 21 more horsepower and 184 lb-ft of torque under hard acceleration, while also serving as a battery regeneration and start/stop activation unit that replaces the starter and alternator.

It’s an almost irresponsible quantity of power, really, that goads you into behaving badly. Departures from traffic lights are instant. See that gap in traffic up ahead, between the Equinox and Altima in the next lane? Think about it and you’re there. Good thing, then, that the GLE 63 S has rock-solid brakes, massive 16×1.5-inch discs paired with six-pot calipers in front, 14.6×1.3-inch single-piston units at the rear. 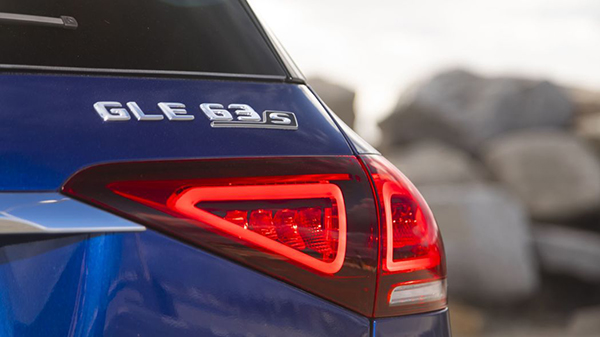 Even better, it comes with myriad electronic systems to keep the unseasoned leadfoot from wreaking havoc on America’s roadways. The 4Matic+ all-wheel-drive system does a seamless job of dispensing torque from 100% rear-wheel drive to an even 50:50 and every ratio in between through an electro-mechanical clutch. The Adaptive Damping System with air struts ingests road irregularities with no drama. AMG’s Active Ride Control anti-roll bars actively stabilize the body for table-flat cornering, its 48-volt system tuning the servos embedded within in milliseconds.

On Southern California’s snaking mountain roads, more suited to a Miata than a hulking luxury crossover, the GLE 63 S’s performance was a $133,600 middle finger to Sir Isaac Newton. It scorched tight curves, all the while ensconcing occupants in the luxuriant comfort of a five-star hotel from a former colonial nation whose staff is so deferential it makes you feel uncomfortable. 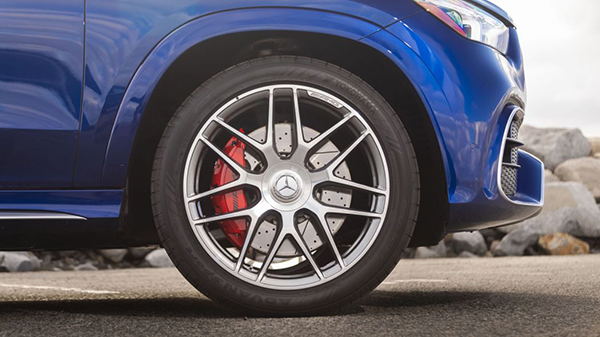 It has a Race setting, for god’s sake, above Sport and Sport+, that is only selectable when the GPS detects that the car is on an actual track. The menu can bring up a g-force meter or lap timer, the cabin can be decorated with carbon fiber trim, and the steering wheel has a center marker at the 12 o’clock position. What is this, a GT-R?

AMG project manager Thilo-Urs Raetzke says that the race car gewgaws exist because they had the technology already, so why not put it in? But, even as the AMG glued itself to hairpins, it was impossible to ignore the computerized bubble between you and the road. While you can sense the harder suspension and steering as you dial up the drive modes, the steering wheel offers little feedback and feels like it’s from a video game, even in the sportiest modes. The gauges can be configured to look like a readout from “Guitar Hero.” The brigade of microchips governing everything from the brakes to the dampers to the sway bar shields you from even your most boneheaded maneuvers. Like Gary Oldman’s ZF1 gun from “The Fifth Element,” you barely even have to point it in the right direction. 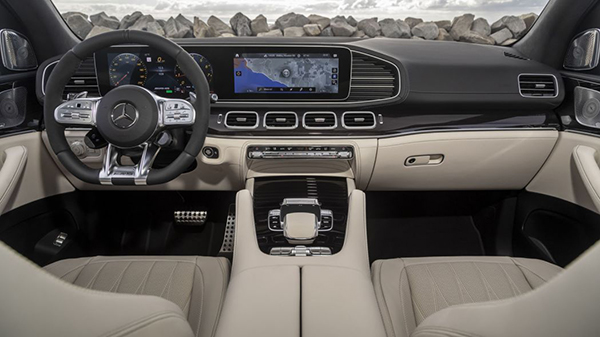 Instead, you can bask in your very own wellness spa while you supercar. Sumptuous diamond-stitch leather coddles your backsides. After a good hillside hustle, the cooling fans at idle sound like an industrial vacuum outside, but in the cabin, the mood is as serene as a Shinto temple. The optional $1,050 Warmth and Comfort package nets you heated door panels and armrests. The $1,450 MBUX Technology Package overlays augmented roadsigns on the 12.3-inch display showing a video image of exactly what’s in your windshield.

We’re not sure if Mercedes is trolling us, but with the $1,650 “ENERGIZING Comfort” Package Plus, you can select from a menu – denoted with a big lotus flower – of settings with names such as “Vitality,” “Refresh” and “Well-Being.” Each uses some combination of climate controls, ambient light, in-seat massagers, fragrance diffusers, and pre-programmed yoga studio music to improve your emotional state. For example, “Warmth” heats your seats and other surfaces and casts a yellow-orange glow throughout the cabin. Eat your heart out, Gwyneth. 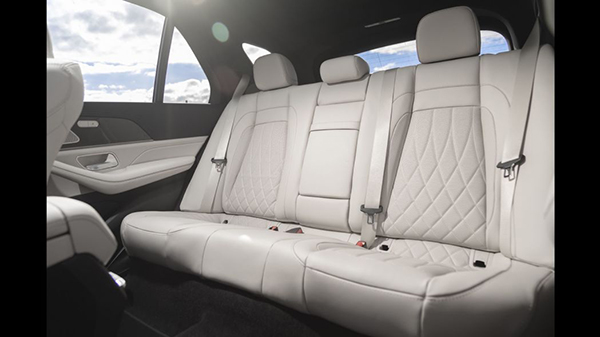 Really, though, we couldn’t help but wonder, who is this for? Throughout the drive, it was hard to shake the thought that, with all the acrobatics the GLE 63 S is capable of, there is no aspect that wouldn’t be improved if it were a car rather than a crossover. But Mercedes has done its market research. A full 50% of AMGs sold in the United States are SUVs. Going a step further, one-fifth of all Mercedes SUV sales, AMG and regular, are sold in California, its biggest market. The state would rank fifth in AMG sales if it were its own country. Perhaps, then, the odd stew of new-age frippery and flashy, race-ready potential makes an iota of sense to a very narrow slice of the demographic.