Introduced on the market in 2018, the Mercedes CLS facelift now undergoes a discreet facelift and receives an improved MBUX system and Plug-in Hybrid diesel and petrol engines.

Auto motor and sports car photos captured the Mercedes CLS facelift with minimal camouflage on the Nurburgring circuit. As you can see from the photos, the changes are minimal in the front that will have a new spoiler. There are no changes to the existing model in the rear.

The current generation Mercedes CLS (C 257) is based on the E-Class platform. Thus, CLS will benefit from the Plug-In Hybrid technology recently introduced on the E-Class. We expect to take over PHEV versions similar to those of E 300 e and E 300 de. 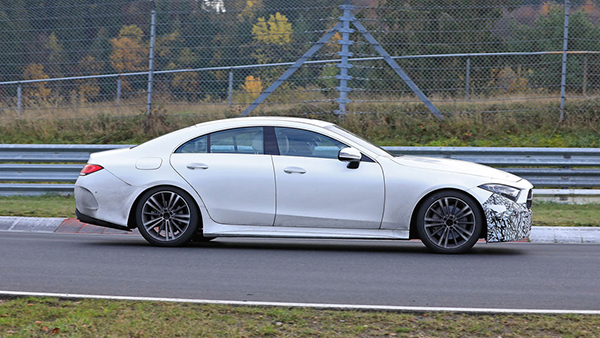 The PHEV petrol version E 300 e combines the 2-liter turbo engine with 211 hp with an electric motor of 122 HP for a total of 320 HP. Also, diesel and gasoline engines will receive a mild hybrid system with 48V technology.

In terms of interior, the Mercedes CLS receives a modernized MBUX system, the two 12.3-inch screens, new assistance systems and a new steering wheel with touch controls as in the E-Class facelift.

The Mercedes CLS facelift will be released in June 2021.
Launched in 2004, the Mercedes CLS is now in its third generation. The four-door coupe invented a new segment in 2004 then copied by both Audi and BMW. But today Mercedes’ sales have halved compared to the first years of his career.