Mercedes debuted the potent AMG CLA 45 S alongside the A45 S last summer. Both were potent small cars with turbocharged four-cylinder engines. While the hatch looks boy-racer ready with the larger roof spoiler, the CLA’s more subdued sedan styling allows it to better slip under the radar. A new video from AutoTopNL shows off the CLA 45 S’s performance chops on the German Autobahn as the driver attempts to reach the sedan’s top speed.

Power comes from a turbocharged four-cylinder engine making a hearty 416 horsepower (310 kilowatts) and 369 pound-feet (500 Newton-meters) of torque. The non-S CLA makes a still-potent 382 hp (285 kW) and 354 lb-ft (480 Nm). The sedan can sprint to 62 miles per hour (100 kilometers per hour) in 4.1 seconds with a manufacturer-claimed top speed of 168 mph (270 kph) when equipped with the optional AMG Driver’s Package that unlocks the car’s higher speeds. 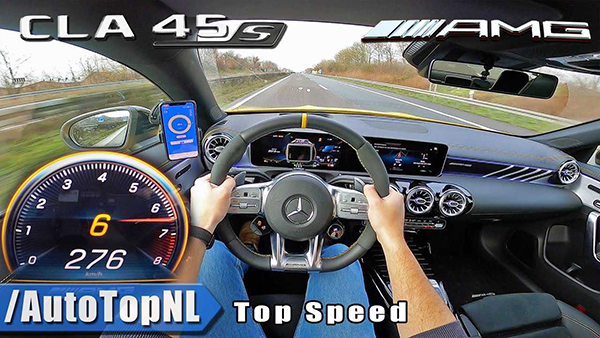 The video shows the CLA 45 S having no trouble rocketing past slow-moving cars in the right lane, nor does it have any trouble reaching triple-digit speeds. However, acceleration begins to slow when the car shifts into sixth gear as the driver wrings out the last bit of speed before hitting the limiter. The CLA 45 S has an eight-speed, dual-clutch automatic gearbox that sends power to all four wheels through Mercedes’ 4Matic all-wheel-drive system.

As always, this video is taken on unrestricted parts of the German Autobahn, so don’t go hitting the local interstate in the act of solidarity. Speeding is dangerous, especially on roads where drivers all too careless about slowing traffic in the left lane. One thing the video exemplifies well is the in-car acoustics. It’s not as robust as the sound from a burly V8 engine, but still heart-pumping. Most four-cylinder engines don’t sound stellar, but this one feels like an outlier.