There isn’t a better sounding new car in America with a four-cylinder engine than this 2020 Mercedes-AMG CLA 45. Maybe the CLA 45 S if it were sold here, but it’s not. To be completely honest, the video above hardly does this car’s exhaust justice. You can hear the bangs on upshifts best from the in-car shots, but that’s probably because our mic just wasn’t capable of picking the gunshots up from the bumper due to the absolutely violent amount of sound they produce.

Seriously, there isn’t a car I’ve driven that makes such loud banging sounds on the upshifts than this one from the factory. It’s hilarious, and while there’s a great argument to be made for pure exhaust notes like the Evora GT’s, sometimes you just want to be a kid and make some damn noise. The CLA 45 does that in spades, and even when it isn’t popping and crackling on the overrun, the exhaust note is rather good. The hand-built 2.0-liter turbocharged four-cylinder is more characterful and fun than any other 2.0-liter turbo on the market today, of which there are a great many. It makes 382 horsepower and 354 pound-feet of torque, all the while revving out to 7,200 rpm. That is seriously spectacular stuff for such a tiny engine. 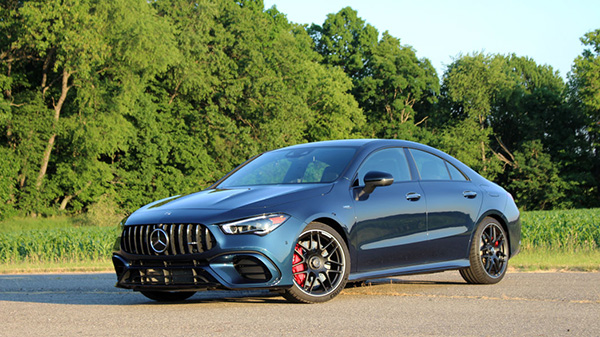 There are a couple modes for the exhaust, but it opens up to “loud” mode if you floor it anyway. When in the normal mode, there are no pops or bangs on shifts. It moves through the gears without much drama, but the exhaust is still noticeably more aggressive and louder than a standard CLA. Things get childishly loud as the exhaust character changes as the driver switches through Sport+ or Race modes. Anybody in the vicinity will hear it, because it’s very loud. Shifting under bridges or overpasses always brings a laugh. Really, this thing is just a blast to drive in loud mode and will instantly improve your day. Even your neighbors will be okay with it on startup or when cruising around, because it’s a four-cylinder and can quiet up like one when not under load. 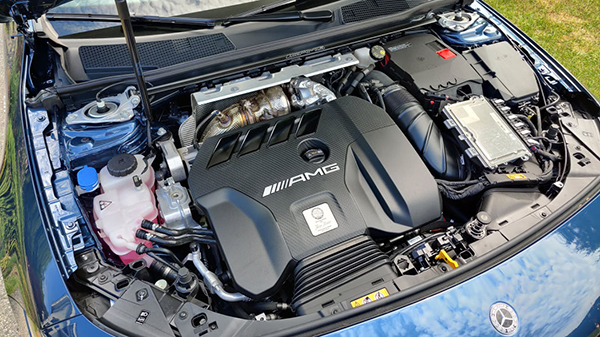 Would we take AMG’s 4.0-liter twin-turbo V8’s sound over this? Of course, but this little four-cylinder makes a great case for itself with the aggressive soundtrack being played out of the quad tips out back. And in case you were wondering, those quad tips are for show — there are only two pipes, one on each side that dump into the accessory pieces molded into the rear bumper.