Due to its shape, people have started referring to it as the mini-CLS. However, it had nothing in common with the executive model that took on the likes of the Audi A7 Sportback and BMW 6 Series Gran Coupe back then.

Not long after it entered production in 2013, the first-gen CLA was joined by a second body style, aimed at people who wanted to live like the Beckhams, but lacked the finances. Unlike the five-door CLS, the Mercedes-Benz CLA Shooting Brake lives on for the second generation, which will blow three candles off its birthday cake this year.

It is still related to the normal hatchback, as well as the GLA premium subcompact crossover, B-Class people carrier, and GLB, which is a bigger GLA with seating for up to seven. A sedan version of the A-Class has joined the family too, and the folks at Affalterbach have had their way with the CLA yet again, making it even crazier than before. 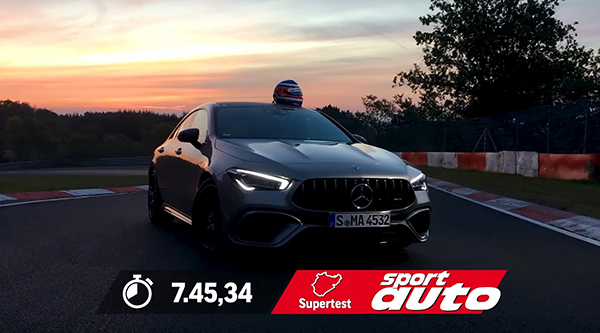 On paper, the CLA 45 and 45 S sound dreamy. They feature a powerful mill, have all-wheel drive, a dual-clutch auto ‘box, and look quite pretty. In the real world, however, where people tend to be careful with their hard-earned cash, it has a very big problem, and it’s called the BMW M2 Coupe. Sure, you could argue that the Munich model has only two doors, but it is a direct rival to the likes of the CLA 45, as well as the Audi RS 3 Sedan.

Seeing where this is going, you might be tempted to think that this story is a comparison between the three, or at least an actual review of the CLA. Truth be told, it could’ve been the latter, as I did have a go in it, and I also drove the A Sedan and Hatch, GLA, and GLB, and I might give my impressions on them in a future article. So, what is it, if it’s not that? A timed lap at the Nurburgring Nordschleife, with a very skilled driver at the helm.

The video that you are about to watch was signed by Sport Auto, and shows Christian Gebhardt drive the heck out of the CLA 45 S, on Pirelli P Zeros, at the infamous German racetrack. It is almost 8 and a half minutes long, and shows the timed lap from the cockpit, yet the car did not need that much in order to conquer the Green Hell, as it did it in 7:45.34.