Fancy one of the most powerful hot hatches on sale? Mercedes will do you two better, offering not only that with the A45 but a swoopy four-door coupe in the CLA45 and this estate – the Shooting Brake. 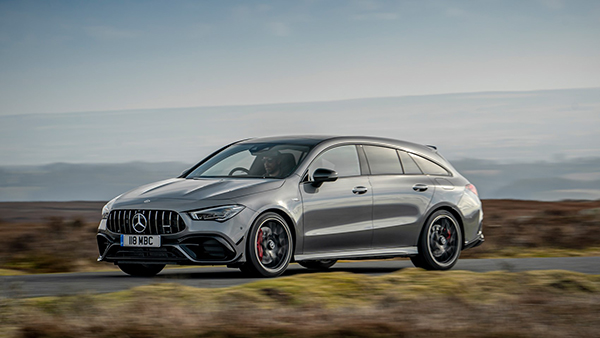 The only trouble, on paper? Well, Mercedes wants at least £54k for the privilege, or £60k for the Plus version.

£60k?! How does AMG justify that?
The engine, for starters, is ballistic. The fact it has a 0-62mph sprint time as short as some supercars is enough to raise an eyebrow, and the way it delivers that power is relentless. The 415bhp 2.0-litre four-cylinder just surges without faltering right up to the redline, almost like it’s an EV. The difference is that you get a growly engine note to match, peppered with pops on upshifts from the dual-clutch automatic. It’s not the most charismatic sound on Earth, but the engine certainly gets the job done.

The eight-speed dual-clutch auto might not appeal to those with any mechanical sympathy. While we know it’s obviously built for it, the way it rams home each gear is ferocious under hard acceleration. And, when you’re not setting a new drag record, it can sometimes struggle in traffic, lurching a tad a low speeds. 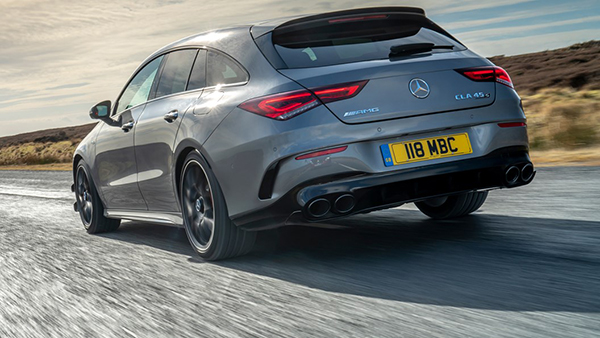 Generally, the AMG’s handling vibe is all about bending the laws of physics to its will, not the other way around. In anything bar heady Race mode, grip is tremendously strong – only your own self-serving survival instincts will stop you going around a corner faster; the CLA 45 is certainly capable of keeping you out of trouble under hard, accelerative cornering. And, even if you do want to get lairy, you just have to do a hokey-cokey procedure of button presses and paddle pulls to engage Drift mode and it’ll slide under power like a Focus RS. In an estate!

What strikes us the most is how sharp the controls feel. The steering is hyper-alert off-centre, but not twitchy at higher speeds – it gives you some serious confidence. Braking is incredible, too. Those massive AMG-branded stoppers seem to enjoy nothing more than showing what they can do when used hard. Great for some hard charging through a gorgeous B-road, but they’ll take a little getting used to when you’re just getting a pint of milk.

The trade-off is lots of tyre noise – our Plus model ran on Pilot Sport 4S tyres and massive 20-inch wheels – particularly on the motorway. Even in Comfort mode, the ride borders on spiky. 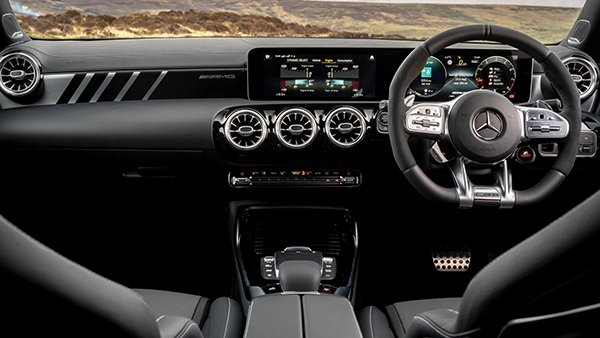 What’s it like to be in?
It’s ground we’ve covered numerous times, given Merc’s use of this interior layout in the A, CLA, GLA and GLB. Slightly glitzy, slightly plasticky dashboard with eye-catching circular vents, two massive screens merged together in one panel and a massive steering wheel. The AMG versions get some additional buttons for quick access to some of the car’s performance technology, and allow you to switch the mode with a twirl of the dial. The AMG Performance seats are supportive but if you’re as washboard skinny as they are, they’re a little lacking in padding.

Rear space is acceptable, but not great for adults, with the sloping roofline hampering headroom. The boot space is 505-litres large, with a nicely square aperture for loading bulky things. 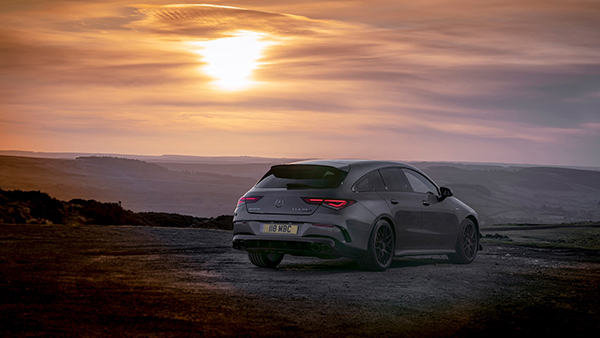 Mercedes-AMG CLA45 Shooting Brake: verdict
Like the A45, the estate-shaped CLA45 is absolutely bombastic as a small performance car, and you feel very much like Major Kong riding a nuclear bomb in Dr Strangelove. But the performance is backed up by infallible all-wheel- drive grip and sharp controls that inject some real handling nous, too. This isn’t quite so point-and-squirt as you’d expect.

It is also a tremendous amount of money. But so is the A45 – even if the list price is around £3k less. Approach it like a real performance car with estate practicality and this will be capable of setting lap records and family trips away all in one car. Look at it purely like a hot hatch, and you might be able to get almost as much thrill from something half the price.