Several weeks ago, Mercedes-Benz unleashed its most luxurious car ever. The new S-Class debuted with a number of new technologies and an evolutionary design. It seems that the smaller C-Class will also follow the same route as this new spy video of the model confirms.

Seen here in sedan form, the 2022 C-Class doesn’t look vastly different from the outgoing model, or at least this is what can be said so far despite the full-body attire. The German sedan doesn’t seem to be tested to its limits but rather, it’s more of an endurance test for the suspension and steering as the test driver is barely hitting the brakes.

Two of the new C-Class’ highlights include a diesel hybrid engine for Europe and an electrified AMG performance model. These were recently confirmed by non-other than Ola Kaellenius, chairman of the board of management for the Daimler group. In fact, according to Kaellenius, the new C-Class will essentially be a smaller S-Class. Like it or not, this probably means there will be just minor visual differences between the two, something Mercedes has been criticized for years. 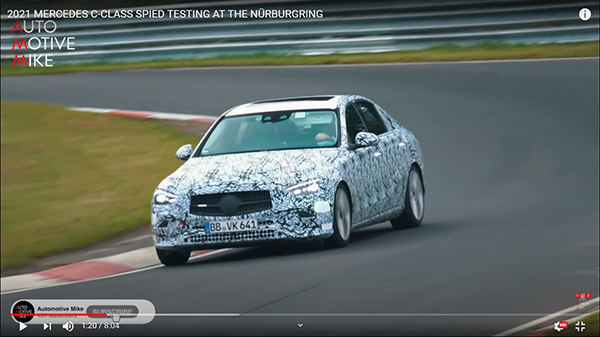 The 2022 C-Class, codenamed W203 (sedan) and S203 (wagon), will probably see a major shift for the range-topping model. The C63 is believed to switch to an electrified 2.0-liter turbocharged engine with four cylinders replacing the current twin-turbo V8. This move probably won’t please the AMG purists but the addition of an electric motor to the four-cylinder mill could help the new C63 get over the current model’s 503 horsepower (375 kilowatts).

The debut of the new C-Class should come at some point next year. It’ll be launched as a sedan and a wagon in Europe but customers in the United States will most likely see just the former at the brand’s showrooms. There are strong indications that the coupe and convertible models will also be axed from the Stuttgart-based company’s North American portfolio.