Mercedes-AMG and the Mercedes-AMG Formula One team are going to be working even closer together in the years to come. The announcement today about increased cooperation and technology sharing between the two births a new branding: E Performance. It’s used on the new F1 car, and it will be used on future hybrid road cars, too.

AMG is teasing one of those road cars today. It’s the rumored, hybridized AMG GT 4-Door, and it’s full name will likely be along the lines of AMG GT 4-Door E Performance. You can see a couple photos of it above, alone and next to the AMG Project One and Mercedes’ new F1 car. 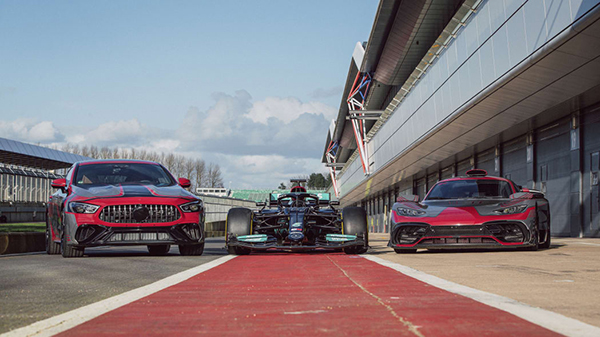 The new GT 4-Door variant looks a lot like the 63 S, but there are a couple of differences we’ll point out. It’s subtle, but the strakes in the front bumper side intakes are vertical instead of horizontal. The “V8 BITURBO” badge is also underscored by “E PERFORMANCE” badging to denote it as the high-performance hybrid. There are no shots of the rear or other side of the vehicle, but we have to imagine there’s a new number on the tail end. Our best guess is 73, to take it one notch above the 63. A 2019 report pegged this model as having upwards of 805 horsepower from the engine and electric motor combined. That’s well above the 630 horsepower from the 63 S that sprints to 60 mph in just 3.1 seconds. Electrification of this powertrain could bring that number into the 2s. This car’s most likely target is the Porsche Panamera Turbo S E-Hybrid that goes 0-60 mph in 3.0 seconds and can be plugged in for fully-electric motoring. 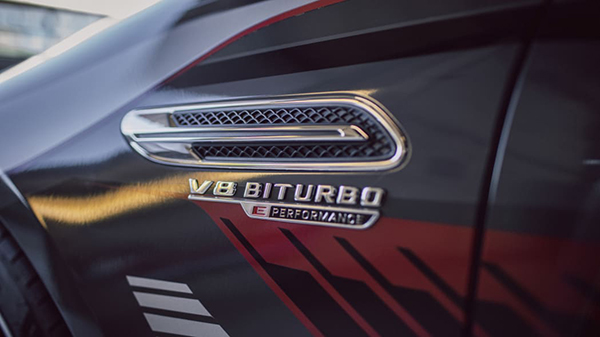 In addition to this car being teased, Mercedes reaffirmed its intentions to begin deliveries of the Project One hypercar to customers this year. AMG also announced its intentions to use technologies from the F1 cars in its road cars, like electric turbochargers and battery cell technology. When we’ll officially see these technologies in production car form is still unknown, but it’s something to look forward to in future AMG products.