Mercedes-AMG GT 4 Door Coupe has been around since 2018 and received a minor facelift this year but the crew at Affalterbach haven’t launched its most powerful version yet. 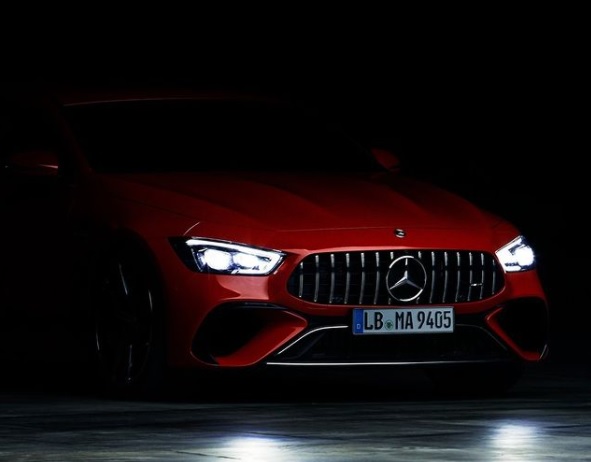 Since March 2021, Mercedes-AMG has confirmed that there is going to be a plug-in hybrid variant bearing the E Performance badge and now the company teased the model on their Instagram page before an official unveiling takes place on September 1st at the IAA Mobility 2021.

The most powerful version of AMG’s flagship coupe might be called the GT 73e. Its powertrain will likely consist of the biturbo 4.4-liter V8 engine, a rear-mounted electric motor and a lightweight battery pack, for a rumored combined output of 805 hp (600 kW / 816 PS) and 1,000 Nm (738 lb-ft) of torque. This would allow a 0-100 km/h (0-62 mph) acceleration in less than 3 seconds, making it faster than the ICE-powered GT 63 S variant.

The teaser reveals the front end of the model which looks very similar to the facelifted Mercedes-AMG GT 63 S. The only difference is the trim on the front bumper intakes and of course the badging on the side gills as we have seen from previous teasers.

The Instagram post comes with the description “The calm before the roar” which is probably referring to the car’s fully electric mode before the biturbo V8 comes to life. This is also suggested by the #everythingbutquite hashtag, proving that the electrified AMGs won’t lose their signature sound – at least not before they become fully electric.

Given that the current Mercedes-AMG GT 63 S is the fastest luxury four-door model to lap the Nurburgring with a time of 7:27.800, the upcoming plug-in hybrid should be able to achieve an even more impressive record due to the added power from the electric motor. The main rival of the electrified AMG will be the Porsche Panamera Turbo S E-Hybrid, even though not as powerful.

Besides the most powerful AMG GT 4 Door Coupe, Mercedes is getting ready to storm the IAA Mobility 2021 with several high-profile launches. These will include the AMG variant of the EQS flagship, a fully electric Maybach concept, the brand-new EQE sedan, and the upcoming smart crossover.