Mercedes-Benz’s cars have come a long way since the 1990s in terms of design, performance and ergonomics. In that same time period, the Sprinter van may as well have moved to a different planet. Like all older apartment-sized vans, early Sprinters were truck-like and not always easy to drive. The current model feels more like a jumbo SUV, and replacing the part-time four-wheel-drive system with a full-time all-wheel-drive setup softens up even the most hardcore member of the lineup. 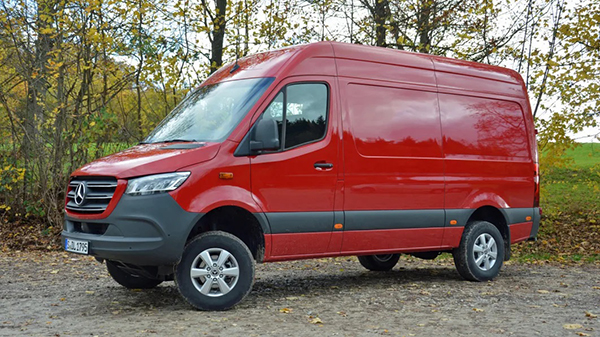 Mechanical cross-pollination
New for the 2023 model year, the Sprinter’s optional all-wheel-drive system is literally car-like: it’s an evolution of the 4Matic all-wheel-drive technology we know from some of Mercedes-Benz’s SUVs.

“It’s the same system you find in the GLE and the GLS,” explained Florian Hofmann, the manager of technology communications for Mercedes-Benz Vans. “The transfer case is based on the GLE’s but it’s adapted to Sprinter conditions. We now use the Mercedes-Benz parts because the performance is better and it’s cheaper. And, it’s not so often that you can have a better system for a better price.”

Starting at the wheels, backtracking the horsepower’s path leads you to a multi-clutch transfer case with a torque-on-demand function, a nine-speed automatic transmission (the V6-powered 2022 Sprinter came with a seven-speed unit), and a 2.0-liter turbodiesel four-cylinder engine called OM654 internally that Mercedes has offered overseas in several models (including the C-Class, E-Class, GLC, and GLE) since 2016. It develops 170 horsepower and 295 pound-feet of torque in its standard state of tune, but buyers who need more can order a “High Output” evolution of this engine that bumps these figures to 211 and 332, respectively. Significantly, the 2.0-liter turbodiesel replaces the 3.0-liter turbodiesel V6, which put 188 horses and 325 pound-feet of twist under the driver’s right foot, for the 2023 model year.

In its most capable configuration, the turbodiesel-powered Sprinter offers a 6,812-pound payload rating; that’s well into heavy-duty pickup territory. It can also tow up to 7,500 pounds. On the gasoline side of the range, the only engine option is a 2.0-liter turbocharged four-cylinder tuned to 188 horsepower and 258 pound-feet of torque. Exclusively offered with rear-wheel drive and a nine-speed automatic gearbox, this engine gives the Sprinter 4,453-pound payload and the ability to tow up to 5,000 pounds. 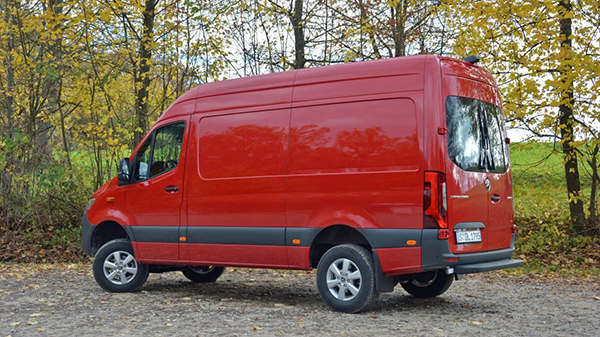 Part car, part van
Step up – way up – into the cabin and you’re greeted by an assortment of familiar parts. Mercedes hasn’t put its dashboard-wide Hyperscreen setup into the Sprinter (at least not yet) but the three-spoke steering wheel’s shift paddles and touch-sensitive buttons, the air vents and many of the switches come from the car side of the portfolio. The intuitive, touchscreen-based MBUX infotainment system trickled down from there as well. It’s when you sit in the driver’s seat (which was heated in my tester) that you realize you’re definitely not in a car: you may as well be navigating a cargo ship, except instead of looking out at the vast emptiness of the sea you’ve got a view over a vast sea of late-model crossovers.

The all-wheel-drive system’s components live under the body so the Sprinter’s cavernous cargo capacity remains unchanged. In its biggest configuration, the panel van offers up to 533 cubic feet of cargo space and a 61-inch loading width. Put another way, you can put a classic Mini in the back with room to spare.

The simpler way to leave the pavement
From the driver’s perspective, the all-wheel-drive system’s best attribute is its simplicity. It’s always on, there’s no need to shift into four-wheel-drive when the going gets tough and it pulls the Sprinter through slippery terrain while you focus on keeping the front end pointed in the right direction. On a short off-road course on the outskirts of Stuttgart, the all-wheel-drive Sprinter effortlessly performed a near-360-degree turn in a pit full of mud and had enough traction to reverse up a steep, muddy hill.

Hofmann told me the new drivetrain made the low-range gear redundant. “We do not need [a low-range gear] anymore thanks to the nine-speed automatic transmission. First gear is about 25% lower than the old seven-speed transmission’s first gear, and the new engine makes more torque,” he said.

His statement will undoubtedly raise more than a few eyebrows; many off-road enthusiasts swear by the crawler gear. It’s important to keep in mind that Mercedes didn’t develop the Sprinter as a hardcore off-roader capable of keeping up with a triple-locked G-Class on a trail in Moab. In this application, all-wheel drive primarily ensures drivers don’t get stuck up a snowy hill or on a muddy construction site.

Lower gearing and an extra serving of that butter-smooth turbodiesel torque only tell part of the story. While the four-wheel-drive system sent about 35% of the engine’s output to the front wheels and 65% to the rear wheels, the all-wheel-drive system offers a fully variable torque split. The Sprinter is rear-wheel-drive in normal driving conditions, like around town and on the highway, but the system shuffles the torque from front to back and even from side to side when it detects that a wheel loses traction.

On the pavement, it’s surprisingly easy to forget you’re driving a vehicle the size of a college dorm room. This thing is huge — huge to the point where there’s a step integrated into the front bumper to help your local mechanic access the engine bay — but forward visibility is excellent thanks to the high seating position, the massive windshield, and the relatively short front end. For the 2023 model year, Mercedes replaced the hydraulic power steering system with an electric setup that’s slow and light, which is precisely what you want in a Sprinter. The ride is, well … van-like. It’s not overly harsh, it feels softer than the Ram ProMaster’s, but no one will think Mercedes-Maybach played a role in tuning the suspension.

Combining the 2.0-liter turbodiesel with the nine-speed automatic makes this behemoth surprisingly quick. It’s evidently not E63 S-quick, but it gets up to speed faster than you might expect due to the low first gear. The two extra gears also ensure the engine operates near its peak torque output as often as possible while keeping the revolutions low at higher speeds and in turn improving fuel economy. 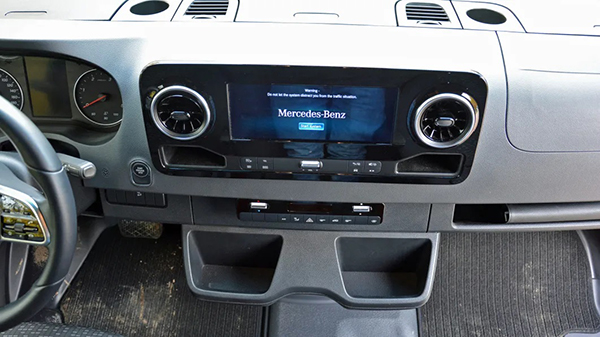 What van buyers ordered
The four-wheel drive versus all-wheel drive debate can fuel pub talk for nights on end, and ultimately there is no right or wrong answer. It largely depends on the vehicle and how it’s used. In the Sprinter’s case, all-wheel drive makes more sense: it’s simpler and cheaper, two attributes prized by van buyers (a diverse group that ranges from fleet operators to #vanlife converts). The fact that this system improves traction without sacrificing drivability on the pavement is a nice bonus. When you see a FedEx driver power up your snowy driveway to deliver a parcel to your door, thank the 4Matic system. In many parts of the country, the all-wheel-drive Sprinter will be welcomed like a well-stocked Christmas basket.

Pricing for the 2023 Sprinter starts at $45,795 (including a $2,295 destination charge) for a cargo van powered by the gasoline-burning engine. The turbodiesel-powered cargo van carries a base price of $49,295 with rear-wheel-drive. Adding all-wheel-drive requires selecting the 2500 model and increases the base price by $12,550, meaning the cheapest Sprinter variant with four driven wheels costs $58,345 including destination. It’s not cheap, but where else are you going to get an all-wheel-drive storage unit?