Mercedes-Benz Vans department has teamed up with the Austrian Post for a pilot project in real life. The parcel delivery service deployed two eSprinter vehicles that have been equipped with particle filters to see if they can reduce the particles in the air in Graz. 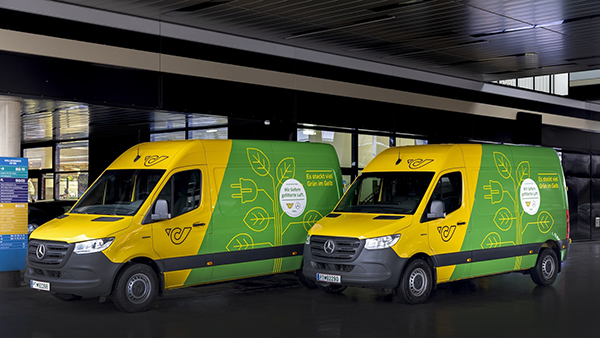 The two all-electric vans were deployed every day in Graz, Austria, where they were used by the Austrian Post. The two vehicles were driven every day in August, through rotation, in the center of Graz. Unlike other vehicles of the Austrian post, these had fine particle filters implemented in their front modules.

In case the name of the city sounds familiar, you might know that it is near the village of Thal, where Arnold Schwarzenegger lived until he was 19. Often, the bodybuilding legend, movie star, and politician is credited as being from Graz, Austria.

Through their time with the Austrian Post, the two vehicles covered approximately 6,400 km (ca. 3976 miles) on their delivery routes. What set them apart from the other postal vehicles was a new filter technology that was made in cooperation with MANN+Hummel.

The respective filter technology was first shown back in October 2021 with the Sustaineer tech platform from Mercedes-Benz Vans. Now, it was tested in real life, and there are even results to be observed. Starting in mid-2023, there will be more results to analyze from the test operation.

Every day involved an average of 60 kilometers (ca. 37 miles) driven, with just under 100 stops, and the delivery of approximately 160 parcels. All values above are daily averages, and they apply to the city of Graz and the Austrian Post, but you get the idea.

Electric vehicles are great for this delivery scenario, as they never stray too far from their logistics center and must make many stops in crowded city areas.

After 60 days of use, the two eSprinters have each filtered around 6,400 milligrams (ca. 0.225 ounces) of dust from the ambient air. Those are the particles that we were writing about at the beginning of the article, and these would have gone into people’s lungs, on clothes, or plants. Audi has deployed a similar pilot program with MANN+Hummel.