Mercedes-Benz only announced the two-wheel-drive version of the S 580 e PHEV in July, and the luxury maker has already improved it. The most powerful S-Class in the lineup so far hasn’t made it to the U.S. yet, so this is a preview of what we expect to eventually come our way. This trim packs a 3.0-liter inline six-cylinder ICE that makes 362 horsepower and 369 pound-feet of torque, getting help from an e-motor with 148 hp and 310 lb-ft of torque. Total system output is 503 hp and 553 lb-ft. Mercedes has made 4Matic an option as of now. This being the brand’s most powerful new-generation S-Class to date, having the front axle get power down should result in more usable power delivery. 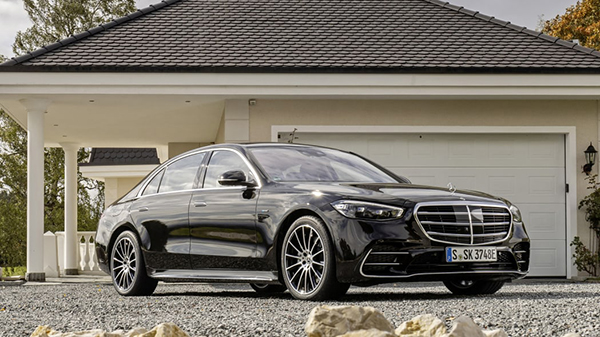 The other improvements over the previous S-Class PHEV are a more powerful 28-kWh battery enabling 92 miles of all-electric driving on the WLTP cycle, more than double the range from before. That battery is lower in the truck as well, creating a flat load floor and permitting a pass-through into the rear cabin quarters.

The other big update happens in the cabin, with the MBUX system. User experience designers wrote in a new zero layer for the system that puts the most important options on the screen at all times, eliminating the scrolling necessary to reach some submenus. The choices on the zero layer change “according to situation and context” thanks to adaptive software that learns the driver’s habits. The automaker says more than 20 functions are now automatically presented “when they are relevant to the customer.”

With transaction prices on the rise even in the budget sector and the super premium sector going nuts with sales and customization, it’s only natural for Mercedes to expand the options palette. The designo name we’ve come to know for decades has been subsumed into the Manufaktur program of specialized design and accessory choices. And Manufaktur for the S-Class has expanded to include seven new metallic and satin paint finishes: graphite grey metallic, graphite metallic, kalahari gold magno, mystic blue metallic, night black magno, olive metallic, and vintage blue uni. The graphite and olive metallics are making a return from their heydays in the 1980s.

Five takes on the Premium Package dose the interior in two-tone Manufaktur hues, being black and a contrasting color either pastel yellow, nut brown, yacht blue, truffle brown, or deep white. The leather-wrapped steering wheel gets in on the two-tone, too, as does the leather edging on the floor mats. Up above, the Mercedes-Maybach S-Class can be ordered with a diamond-embroidered roof liner and center panel in one of five colors.

Mercedes continues its move toward sustainability by offering a leather-free interior for the first time on the S-Class. This puts fabric on the seats and Artico man-made leather everywhere else. And the brand ups its reputation for safety by offering a new Urban Guard laminated safety glass, designed to be break-in resistant and engineered with thermal and noise insulation thanks to more layers of film between the panes.