Introduced in 1959 and built until 1971, the W111 was a range of Mercedes-Benz cars available in various body styles, all of which featured a set of unique tailfins that earned them the Heckflosse (fin tail in German) moniker.

Among them were the V8-powered, 280 SE two-door coupe and convertible models that became the most sought-after members of the Mercedes lineup during the 1960s. These cars were the perfect blend between luxury, maneuverability, and performance, so the decade’s biggest celebrities either owned or dreamed about owning one.

Today, the W111 range is remembered for its exceptional build quality. If you get a chance to see one in front of you, it quickly becomes clear that it was built to last for generations. Unlike today, there are few plastic components used in its construction, and virtually everything is made out of solid metal. This is one of the main reasons why many of them have survived, even if some endured decades of neglect.

Many of these neglected cars are salvaged by the experts from Mechatronik who transform them into some of the most epic machines that ever graced the road.

Based in Pleidelsheim, a small German town located about 30 km (19 mi) north of Stuttgart, the company was established in 1997 and since then, it has made quite a name for itself for excellent restoration work. 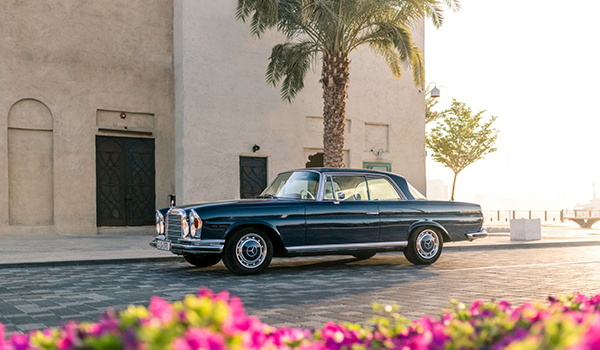 To understand just how well-respected it has become, particularly in Europe, it’s worth noting that Mercedes-Benz’s Classic Center, as well as the manufacturer’s museum, has commissioned Mechatronik to restore several historic vehicles.

Apart from conventional restorations, the company also offers a range of restomoded cars that can actually be ordered and customized using a configurator found on the official website.

The most popular models are dubbed M-Coupe and M-Cabriolet, two W111s that are upgraded with modern tech without altering their authenticity. These amazing vehicles are based on surviving examples sourced from around the world by a dedicated team that follows intricate selection and quality assurance procedures.

Once a suitable car makes it into the shop, it’s completely disassembled, and thorough restoration of every single component begins. Next, the chassis receives a revamped suspension system that features double wishbones at the front and a single-jointed swing axle at the rear. Furthermore, KW Automotive performance shocks and springs are mounted on all four corners, then they are adjusted to each individual customer’s requirements.

A new, braking system with ABS is also fitted but, rather than using aftermarket components, Mechatronik goes for original Mercedes-Benz parts. In the front, each car is equipped with two-piston calipers originating from the W126 S-Class that hug large diameter drilled rotors. For the rear, the W111’s standard setup is kept but the components are all brand-new OEMs.

The most interesting upgrade is found under the hood. Since the base vehicle for the is always a 280 SE model that came with a V8 from the factory, it’s only right that a modern eight-cylinder takes its place.

Mechatronik engineers chose the M113, which is not as modern as you would think, considering that it was built between 1997 and 2007. However, this legendary natural aspirated engine that was used in over 30 models throughout the years is known for its incredible reliability and performance. In fact, many enthusiasts see it as one of the best powerplants ever produced by the German manufacturer.

The retrofit is done so flawlessly that the chassis suffers no modifications to house the new engine which is linked to a Mercedes five-speed 5G-Tronic automatic and a limited-slip differential.

The fully restored body retains its 1960s design, receiving no modern upgrades or alterations. It can be finished in a wide range of paint options, and some period-correct accessories such as auxiliary headlights or fog lamps can be optionally fitted.

The same theme continues inside where everything is restored yet original. Each car is available with creature comforts like power windows, a modern air conditioning system, or a custom, retro-inspired audio system, but these are all so subtly integrated that you’ll have a tough time noticing them.

Like the exterior paint, the cabin’s upholstery and authentic wood trims can be finished in a multitude of colors, giving the M-Coupe or M-Cabriolet a unique appearance.

The finished product is a vintage sleeper that combines the timeless design of the original W111 with the power and drivability of a modern Mercedes-AMG model.

Apart from money, those who want to buy one of these pieces of automotive art need to have a lot of patience. Due to the complexity of each build, the company states that it can only build five examples each year and the current waiting list is pretty long.

One of these cars took part in the 2016 Gumball 3000 rally that started in Dublin, Ireland and finished in Bucharest, Romania. You can hear it rumble in the video below, posted on YouTube by NoPro.