In the early 2000s, MPVs (multi-purpose vehicles) gained a lot of attention and popularity amongst large families who sought the ultimate practicality. The small A- and B-Class fulfilled this role quite well but, in 2005, Mercedes-Benz (MB) went a step further and created the W251 R-Class, a large-sized minivan-like 4-door vehicle that shared its platform with the ML- and GL-Class large SUVs. 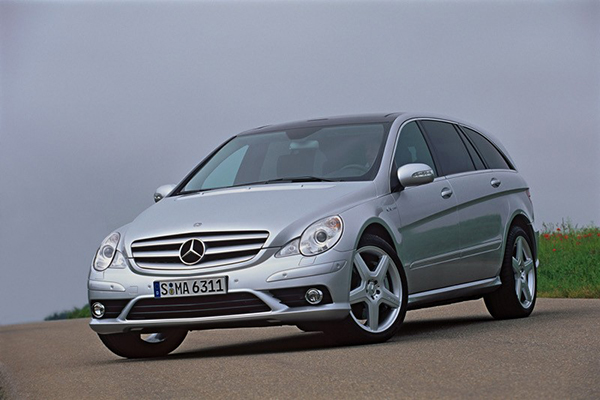 One year later, during the 2006 North American International Auto Show, the German brand made a surprising reveal of the AMG version of this practical 4-door for the 2007 model year, naming it the R 63 AMG. For many, it was a performance machine that nobody asked for. A large minivan that could carry four, five, or even seven people and all their luggage wasn’t exactly the premise for giving birth to a firebreathing performance AMG, but they still did it. Taking advantage of a time when innovation and out-of-the-box thinking were at their peak, unhindered by the ever-tightening regulations, AMG took the liberty to create a project that placed itself in history as one of the most unusual modern performance machines ever produced. Simply put, it definitely was and continues to remain in a league of its own.

The beating heart of this ultimate people-carrier was the Affalterbach’s famous hand-built 6.2-liter naturally aspirated M156 V8 engine that produced 510 hp and 465 lb-ft (630 Nm) of torque and came mated to a 7-speed AMG Speedshift 7G-TRONIC transmission. Even more, this high-performance minivan came fitted with the same 4MATIC four-wheel-drive system that was also available on the ML 63 and GL 63 models of the era. We shall not forget that during those years, the other AMG 4-door offerings which came in sedan form, like the C-,E-, S- or the CLS 63, were available in rear-wheel-drive only. In other words, if you sought after a 4MATIC AMG but the SUV route was out of the question, the R 63 was your only choice, unlike today’s 4MATIC+ systems that can equip a variety of vehicles, from small to large classes.

It took only 4.6 seconds for the R 63 AMG to reach 62 mph (100 kph), and it could keep going until reaching a 155 mph (250 kph) electronically-limited top speed, which could be further increased using the optional AMG Driver’s Package to 171 mph (275 kph). The driving characteristics of the vehicle were quite impressive for its mass and high center of gravity. Thanks to extensive steering and suspension alterations, including the addition of the Airmatic system featuring adjustable firmness and high settings, the R 63 maintained a composed attitude when taken to the limit.

Exterior styling was, of course, a unique proposition. The MB super van had technically four conventional doors but, its egg-shaped architecture and high roofline were unmistakable. AMG brought out their best tools, fitting the R 63 with an aggressive widebody kit, 20 or 21-inch alloy wheels, quad-exhaust chrome tips, and some massive 15.4-inch rotors up front and 14.4-inch rotors in the rear.

The interior cabin was a beautiful and pleasurable place to spend time. The main highlights were the comfortable but still supportive AMG sports seats, the wood and leather-wrapped steering wheel, and multiple color choices for the leather upholstery. Additionally, being a luxury Mercedes-Benz after all, it featured a lot of creature comforts such as rear-seat entertainment, heated and ventilated seats, and an advanced infotainment system for the time. 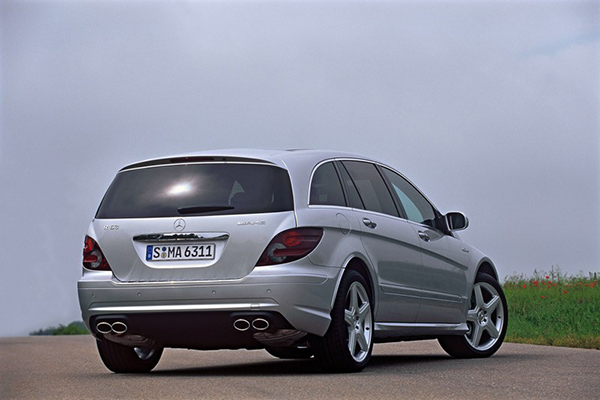 Sadly, the R 63 AMG was sold in low numbers, mainly because of a lack of marketing and the niche character of the vehicle. In total, only 200 vehicles were produced worldwide, with less than half for the US market, at an average asking price of $90,000, which makes it the rarest modern AMG model. In today’s second-hand market, the average value of a used unit sits around the $30,000 mark but expect to pay serious money for one in fine condition with low miles. But first, good luck finding one for sale.

An ultra-rare performance machine, built only in one production year, the Mercedes-Benz R 63 AMG is an odd creation that must not be forgotten. Unrivaled in its class, not then and not even now, and able to keep up with all the supercars of its time, the mad AMG 4-door people carrier is one of their most interesting and unique projects to date.