In this video you see me building a DIY electric powered fat bike with car tires at home in my garage. The video contains the full build start to finish. I added chapters below to easily navigate through the video.

A recent video posted on a YouTube channel by the name of HennyButabi reveals an engineer and craftsman that takes you through step-by-step instructions on how to build your own e-bike. While that normally wouldn’t be a big deal, this e-bike is sittin’ on a pair of AMG dubs!

Yes, a pair of 20-inch wheels from an AMG is what you, too, can be riding around the hood. Now, if you do happen to have too much time on your hands or are simply a lover of e-bikes and/or AMG vehicles, then this is the project for you. Ready to find out what it takes to make your own?

Well, everything starts with nothing more than an old hardtail MTB. However, by the end of the build process, I realized that very little of the bike was used, mainly the fork and some drivetrain bits. So proceed to cut off the fork, cut off the stanchions down to the crown, and what’s left will be used to create a new headtube construction. 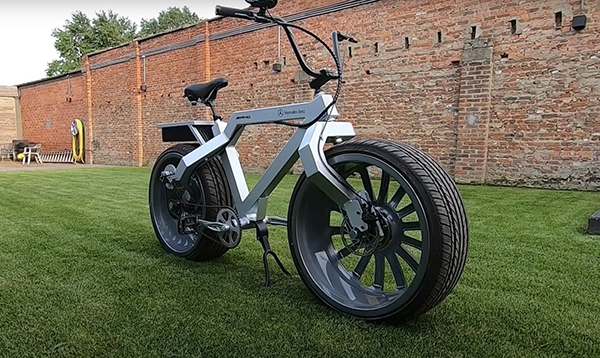 Up next, it was time to figure out a way to mount two 20-inch AMG wheels to a frame. The video shows the engineer focusing his attention on creating wheel mounts for the dubs. However, there is one major issue with car wheels on a bike; the lack of a thru-axle.

Because of this, all mounting is to be done on one side of the wheel. How is this overcome? Through engineering and lots and lots of welding. The solution was to create a sort of single sidearm mount that not only functions properly but looks quite cool with the rest of the frame. With mounts figured out, bearings in place, and chain sprocket on hand, it was time for the brakes.

Up next, the video cuts to scenes that reveal how the frame was built. After cut upon cut, a frame was beginning to take shape. Then, with welding abilities tuned, the frame was basically done. The wheels are then brought in and sidearms welded to their corresponding components and the motor in the next phase. 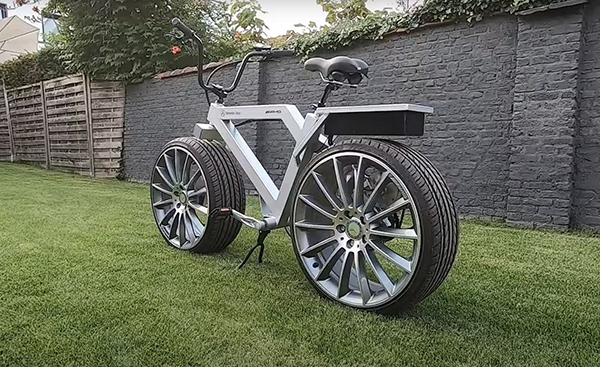 For a motor construction, two hoverboard motors were used, after all, this whole thing weighs about 75 kg (165 lbs), so there’s definitely a need of some good power. With two 350-watt 36-volt hoverboard motors, we can see HennyButabi connecting the two so that they work together as one unit. Pop that into the rear wheel construction, add a sprocket and 1x drivetrain, and off we go to building a very rudimentary bottom bracket.

As for the final component of any e-bike, the battery system was also given some attention. Building a battery tray out of some fiberglass, the final component was beginning to take shape. Inside, two 48-volt, 72,000 mAh lithium battery packs were used to feed this monstrosity’s thirst for electricity.

The final steps include painting the frame, assembling the battery box to the frame, adding finishing touches like cable connections, chain, and everything else. With a test completed and some studio shots, we then see the creator of this eye-catching apparition riding around town with a max speed of 45 kph (28 mph).

Honestly, I think this is going to be the next big fad or movement. Just imagine weekend get-togethers in some parking lot where everyone has an e-bike with their favorite car brand tires. What’s car tires would you toss on a custom e-bike frame?