It’s hard to imagine things more insane than a roaring V8 parked under the hood of a minivan. While most people immediately go straight to the entirely over-the-top R63 AMG. Of course, we understand why. With 500 horsepower and a zero-to-sixty sprint in under 5 seconds, we can see why it’s easy to overlook the “lowly” R500. However, the R500 certainly holds its own in the scape of quirky vehicles that probably shouldn’t have a V8 in them. One thing we can all agree on, though, is that the R-class was not beloved for its looks. It’s more of a utility thing, you see. 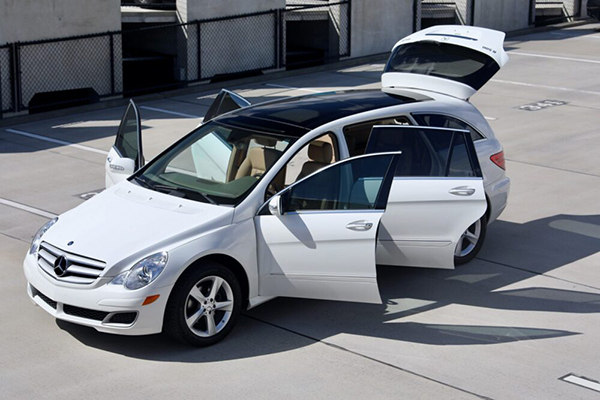 This 2007 Mercedes-Benz R500 recently made an appearance on Bring A Trailer, and it’s being sold without a reserve. Though it is a bit more sensible than the R63 AMG, it’s still quite a lot of car and may wind up going to someone for a great price. As of writing, this auction has six days remaining and currently only has a bid of $3,500.

Killer Sound & Performance
Again, while it isn’t nearly as rowdy as the almighty R63 AMG, the R500 still has plenty of grunt to get the kids to soccer practice on time. Under the hood is a Mercedes 5.0-liter V8 making a whopping 302 horsepower and 339 pound-feet of torque. Furthermore, it pumps that power through all four wheels using the Mercedes 4Matic all-wheel-drive system. All of these power figures mean it’s good for a zero to 60 sprint in just 7.7 seconds. Additionally, it’ll do a quarter-mile in about 14 seconds in stock form. Again, this is a 14-year-old minivan we’re talking about here.

Of course, all the typical Mercedes comforts are found on the inside. Classy leather interior, dual-zone climate control, navigation, and all of that jazz. It also recently had new air suspension installed in the rear for the factory self-leveling system, as well as an oil change in March of 2021. It currently has only 86,000 miles on the odometer.

A unique feature to the R500, as well, is the dual panoramic moonroof that offers all occupants a clear view of the sky. Alternatively, it makes for a great way for the sun to get in everyone’s eyes simultaneously. Neat! 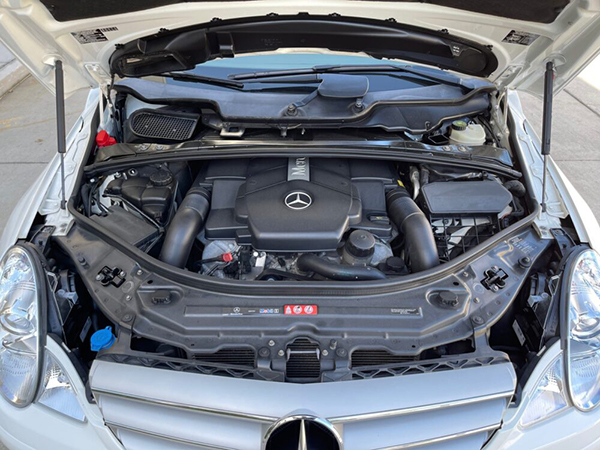 What’s it Worth?
Perhaps the most advantageous bit of the R500 over the R63 AMG is the price point. According to Bring A Trailer’s past auction results, an R500 with nearly half as many miles sold for right around $15,000, which is pretty consistent throughout the R500 sales they have recovered. Compare that to the R63 AMG, which shows prices upwards of $30,000 on the Bring A Trailer results page, and the R500 starts to look a lot more appealing.

Do you really need that extra couple hundred horsepower? Suffice it to say; the answer is no. You don’t even really need the 300 horsepower in a minivan that this R500 has. However, despite its unfortunate looks and undeniable “why does this exist” factor, we can definitely see why you would want it. Simply put, it’s so ridiculous that it’s wonderful.