Maximilian Götz Waits, Picks Up the Pieces & Lifts an Incredible 2021 DTM Crown
Some will say that Mercedes-AMG stole the 2021 DTM German Touring Car title at Norisring last weekend. Some may say it’s unfair, that the favourite was banged out the way. And others will contend that Mercedes-AMG was remiss to play its tactical hand. But racing is unfair by nature. And all Mercedes-AMG did, was let the weekend play itself out to steal and unlikely title as ‘idiot’ rivals squandered their chances. 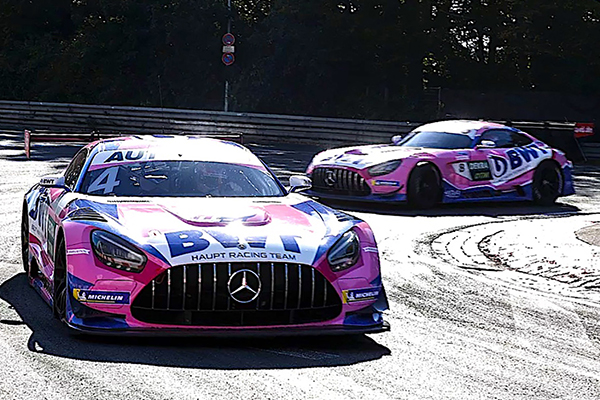 An Epic and Unlikely Mercedes DTM Achievement
But come Sunday evening, Mercedes driver Maximilan Götz had overcome a most unlikely championship deficit to steal a wholly unlikely 2021 DTM title. All of which makes this the tale of an epic Mercedes racing achievement through a weekend of wild racing action, drama and intrigue, all that much more incredible.

Mercedes driver, Indian Arjun Maini scored a career best second as he held the disgruntled Lawson and van der Linde to third and fourth. Despite Lawson escaping sanction for spinning Mercedes driver Philip Ellis out (above) in his haste to make up places. All of which meant that Lawson, van der Linde and Götz also all remained in title contention. Albeit that the latter duo faced an uphill battle.

Front Row Favorites
Lawson then pipped van der Linde to Sunday’s final race pole position too. Götz was back in fifth in his success ballasted Mercedes-AMG GT3. True to form, the start of the final race of the DTM season proved chaotic. Van der Linde dived boldly inside of Lawson, who did not hesitate to turn hard in to the errant Audi. That left Lawson limping along with steering damage. And van der Linde slapped with a five-second pit stop delay for cutting that corner.

“Sometimes you just can’t prevent the same idiots from doing the same thing,” a bitter Lawson complained. “To get taken out by the same driver both days is very very frustrating.” Lawson’s fate was rued far and wide. Although some critics scratched their heads as to why exactly, the young Kiwi never just opened his steering to avoid a move he should perhaps have expected?

Van der Linde was remorseful. “I did not want to drive into his car. “That is not my job. “But we had contact in Turn 1.” Triple DTM champion Rene Rast jumped to his Audi protege’s defence. “Maybe he was a bit aggressive, but Kelvin had to take a risk. “He’s a racer — he would never just roll to the finish just because Liam was 19 points ahead!”

Rivals’ Clash Opened the Door
All of that opened the first door towards something very few expected. Mercedes was however fully prepared for a most unlikely outcome: “My experienced DTM Mercedes teammates, Daniel Juncadella, Lucas Auer and I knew exactly what happens in Turn 1 at the Norisring!” Maxi Götz pointed out. “With our two title rivals on the front row, there was only room for one of them to get in front. “And there is often a crash at Norisring’s Turn 1.

“After they clashed on Saturday, we discussed it before Sunday’s race. “We decided that we should take care of ourselves, not to touch each other and give each other some room. “We did that and everything else resolved itself automatically” “To be honest, I had hoped that they would clash for a bit. “And exactly like Saturday, the war started in Turn 1 again on Sunday.

“Of course, what happened between Lawson and van der Linde was never in our hands. “It was pure racing — maybe a bit too much! “But in the end that suddenly put us into a position to win the title.” That was however not the end of it. There was still an Audi in the ointment as van der Linde had emerged third ahead of Götz after serving his pitstop penalty, but behind dominant Mercedes men Lukas Auer and Philip Ellis up front.

The Audi in the Ointment
So Götz and fellow Mercedes driver, Spaniard Daniel Juncadella put van der Linde under extreme pressure. Götz and van der Linde soon clashed in their fight and the Audi suffered a puncture on the following lap. “Maybe karma came back to me, because Kelvin was really defending hard from me and he got a puncture,” Götz owned up. “But that’s all part of the game!“

That left Auer, Ellis, Götz and Juncadella running a Mercedes 1-2-3-4. And Lawson and van der Linde out of the points. Not even the race commentator, who was already celebrating limping Lawson’s title, saw what would come next. But it was clearly very well planned… First second man Ellis, and then leader Auer slowed to allow Götz take the lead. Mercedes had played the team game to allow Maximilan Götz to stand on the verge of an almost impossible feat.

But still, it was not yet over. Enter Lawson’s Red Bull Ferrari teammate and Kiwi compatriot Nick Cassidy. He had driven a brilliant race to come from behind after being slowed when the stranded Lawson blocked the road following that T1 clash. Cassidy had closed in on the leading Mercedes quartet and launched a last, desperate attempt to drive his Mercedes rivals off the track. In a vain effort to rescue his desperate teammate’s title.

Kamikaze Cassidy
Cassidy’s efforts eliminated Philip Ellis’ Mercedes and severely damaged the others. But his Ferrari was clearly no match for the Mercedes in crash resistance. He too, was soon limping home punctured. Bits and pieces of his wrecked 488 debris lay spread along most of the track. And Götz somehow escaped that final mayhem to win the race from Auer and Buhk in a stunning Mercedes-AMG 1-2-3. He had quite literally stolen a most unlikely title.

“It’s hard to believe that we are the DTM champions,” victor Götz admitted. “Before the race, I was third in the points and I knew I had nothing to lose. “But we chose to rather take it easy, to wait and see if our championship rivals would help me out. “And exactly this happened. “Most importantly, we we are a great team, we worked hard and believed in each other – this is a fantastic result!”

In conclusion, Mercedes-AMG DTM boss Thomas Jager admitted that it was only logical to capitalise on the opportunity Götz was handed by his title rivals. “It’s a give and take relationship,” Jager explained. “We have seven cars on the grid and everyone benefits. “We share data, video and set-up between the teams and we have a very strong Mercedes-AMG support system and all our cars are competitive.

An Incredible 2021 DTM Result
“But then it is also in our teams and driver’s hands. “On Sunday we found ourselves in the position to win the title. “Every driver was willing to help make such a great result happen, so all I can do is say thank you to all of our teams for an incredible result.”

Of course, the social media exploded as the 2021 DTM outcome went viral. But as Maximilian Götz explained, he had nothing to lose. Had Liam Lawson just opened his steering wheel a little, when van der Linde took his bold chance in that Turn 1 fiasco, his Ferrari would likely not have been damaged. That contact opened the door for Mercedes to pull off one of the most amazing come from behind titles in racing.

And that is what history will ultimately record.