AMGs will always have a special place in my memory bank. As a rookie video producer here at Autoblog back in 2013, I was sent to an event called “The Best of AMG.” You fly to the L.A. airport, get the keys to an AMG and drive out to Willow Springs raceway to track any AMG model you want. In the span of three days I got behind the wheel of many dream cars, the pièce de résistance being the gull-winged SLS AMG Black Series. This AMG doesn’t come with track time, but it does come with 603 horses under the hood, as well as all taxes covered. Plus, you get to keep it. 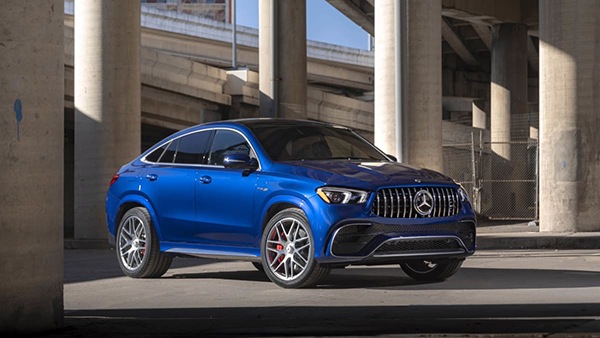 Here’s what we thought about the Mercedes-AMG GLE 63 S when we drove it:

“On paper, this is one of the beastliest cars I’ve driven in recent months. On a snow-covered road with everything dialed over to comfort, it’s a teddy bear. Our tester was equipped with winter tires, and between those and the standard all-wheel drive, you have as much control as you could possibly ask for on a snow-covered road. What you choose to do with that power is entirely up to you.

“Just want to cruise along an ice-and-snow covered street with lots of hills and bends and unpredictable surfaces lurking below? No problem. Want to let loose in an empty parking lot with nothing nearby to hit? Go nuts.

“Whatever the GLE 63 S Coupe may be (depending on who you ask, a sawed-off family SUV, a fashion statement or just a plain-old abomination) this is a vehicle that happens to offer almost as much horsepower as the last-generation SRT Viper. These two vehicles would never be cross-shopped; they don’t even belong in the same sentence, let alone the same automotive niche.

“Unlike the aforementioned Mopar, which is an engine and steering wheel with some metal and plastic wrapped around it for the sake of meeting government regulations, the GLE is, first and foremost, a status symbol. It’s really only important that it have the sort of credentials you expect from a six-figure luxury car; the chances of anyone who buys one taking full advantage of those credentials seems remote. Even my snow-covered parking lot scenario seems unlikely for its owners.

“But that’s not good enough for the folks in Stuttgart. Fortunately, technology has reached the point where a four-door Mercedes CUV can have 603 horsepower and not be headline-worthy. The catch is, the same things that make this fusion of performance and docility possible — a fancy all-wheel-drive system, great tires and a good bit of computing power — are typically at odds with the very thing that makes 600-plus horsepower fun to begin with: a genuinely engaging experience. But when it’s done right, as it has been here in the AMG GLE 63 S, it’s a real treat.

“Cars like the GLE have become so smart that even their nannies don’t ruin all the fun. Sure, in comfort mode, the GLE’s traction and stability control will intervene relatively quickly if things get out of hand (hard to do; it’s quite tame in “C”) but in the sportier modes, the computers give you a lot more leeway. And even if you do get their attention, you may not even notice. It’s not the abrupt, on-/off-switch style approach that soured so many of us on the traction- and stability-control systems of old.

“But even if those systems stifled the engagement we coveted in sporty cars a decade ago, they’re having an inverse effect when it comes to cars like the GLE. Each incremental development in these systems grants us a little more previously untapped potential without a corresponding hit to civility. Sure, you can slap a supercharger on a Chevy Tahoe and surprise a lot of people when the light turns green, but even under the best of circumstances, that power will largely go to waste. What’s the point of all that muscle if you can’t harness it?

“It’s the harness – the chassis, the advanced drivetrain, the adaptive powertrain logic – that makes the GLE so sublime. Sure, the 4.0-liter, twin-turbocharged beast under the hood deserves its share of the credit, but you can do just about anything you want in this 603-horsepower sport utility “coupe,” even when it’s 20 degrees and snowing. Well, except turn on a heated steering wheel.”

The donations themselves benefit Imagine Justice, which Omaze describes as “Award winning Artist, Common has centered his impact initiatives at the intersection of art and activism as a way to advocate for criminal justice reform, public education, civic engagement, mental health and wellness. At Imagine Justice, we are dedicated to empowering communities to address these issues with programs that spark change through the power of art and creative expression. Imagine Justice was founded by Common in 2018 and is fiscally sponsored by the Edward Charles Foundation.”