Mercedes is testing the AMG variant of the next-generation E-Class in Scandinavia, with our spy photographers catching what appears to be the upcoming E53e hybrid. The camouflaged prototype is following the spy debut of the regular E-Class a few months ago, sporting a number of performance-focused components. 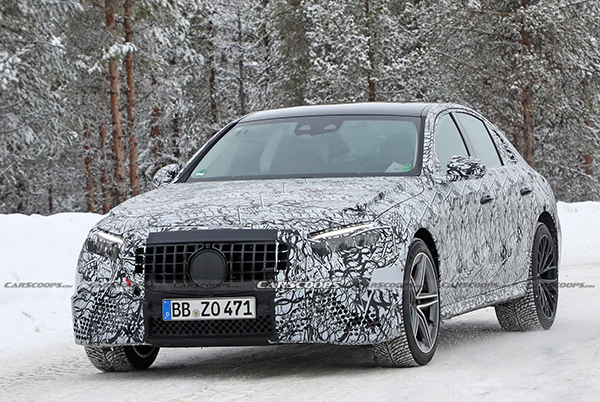 The Mercedes-AMG E53e was spotted at a gas station so our spy photographers got the chance to shoot some close-up photos revealing more design details under a full-body camouflage wrap. The body and overall silhouette are quite familiar, and it seems that Mercedes designers took an evolutionary approach compared to the current generation of the E-Class.

Unsurprisingly, the AMG E53 gets a different grille from the lesser variants, although this prototype doesn’t have a Panamericana outer shape as we would expect. It also features more aggressive front and rear bumpers with a more pronounced splitter and larger functional intakes as suggested by the holes on the wrap. At the back, we can see quad exhaust pipes protruding from the bumper, likely be reserved for the AMG-branded E53e and E63e performance variants. 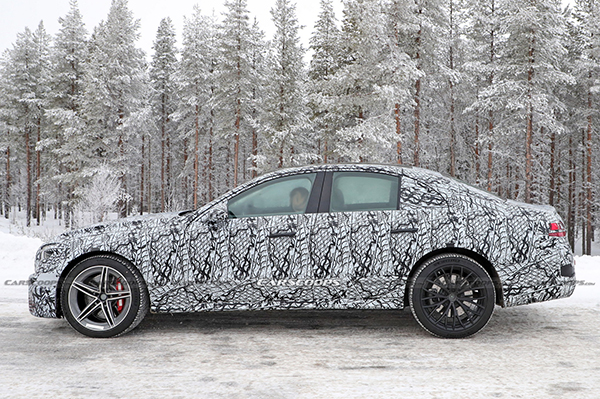 The model is fitted with a set of 20-inch wheels shod in Michelin Pilot Alpine 5 winter tires measuring 265/40R20 at the front. Weirdly the prototype is wearing mismatching rims with the classic AMG dual five-spoke design on the front axle and a different black-finished multi-spoke design at the rear. The new wheels are hiding larger-diameter drilled brake discs with red-painted calipers.

While details on the AMG-tuned powertrain are scarce at the moment, the extra cap on the left side looking identical to the gas cap on the other side could mean that the pictured vehicle is a plug-in hybrid. Indeed, the Mercedes-AMG E53e is rumored to get an electrified powertrain combining a four-cylinder engine with electric motors resulting in increased combined power output over its predecessors. 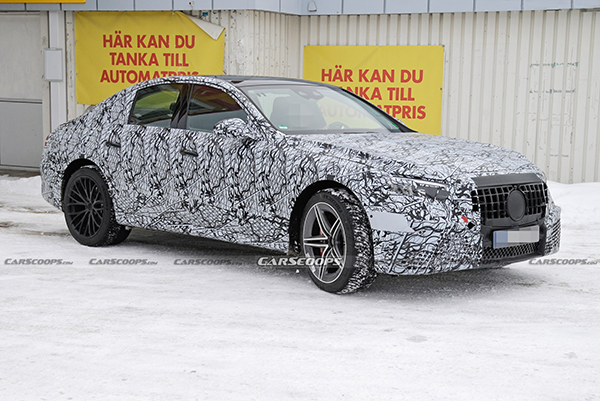 The debut for the Mercedes-Benz E-Class is expected sometime in 2023, alongside the E53e, while the flagship E63e will likely follow at a later date. The model will be sold alongside the similarly sized and fully electric Mercedes-AMG EQE 53 4MATIC+ as an ICE-powered alternative.