Enjoy our highlight of Kelvin, a van designed by a photographer client with objectives of working, living, and traveling in a 144″ Sprinter 4×4. This video share this client’s unique taste as well as his approach to features like Kelvin’s storage garage and computer workstation.

We here at Motor1.com follow Advanced RV closely. Whether it’s news about the Cleveland-based company’s unique B Box RV or the many custom camper vans it builds for clients, Advanced RV’s work is always innovative, interesting, and of the highest quality. It’s latest build is called the Kelvin, and it’s based on a short wheelbase (144-inch) Sprinter van with 4×4.

The Kelvin’s unnamed owner is a traveler and photographer who wanted to work from the road and be able to go anywhere, from urban centers to access roads out in the wilderness. But he also wanted a van with all the comforts of home plus a large home office. Just one of those two objectives is hard enough to accomplish in the short wheelbase Sprinter, let alone both, but somehow Advanced RV has done it.

The interior layout of the Kelvin is similar to that of the brightly colored Baja we shared previously, sans the bright colors. Instead, the Kelvin is understated with two-tone accents on the windows and a large band of muted blue around the interior’s lower half. The galley kitchen features an impressively long stainless steel countertop that’s situated across the aisle from one of Advanced RV’s impressively large wet baths. There’s a 40-gallon fresh water tank, 25-gallon grey tank, and 25-gallon black tank on board. The Kelvin doesn’t have solar, but its impressive 11 kWh of lithium batteries are charged by a second alternator while the van is on the move. 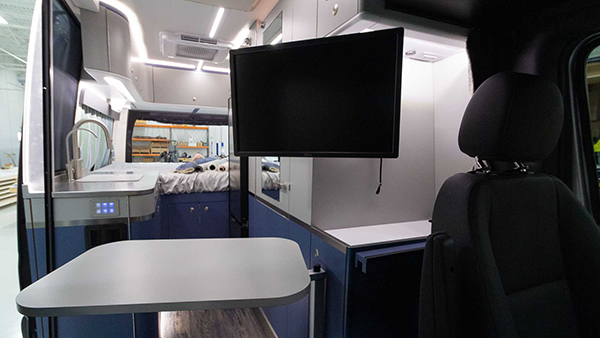 The rear storage of the Kelvin is located under a fixed platform bed and is fully finished. It looks as nice as the rest of the interior, right down to the same flooring. The cargo floor features four large panels that give the owner access to each of the van’s mechanical systems underneath, while leaving enough room for bikes and other gear above that can be secured via inlaid tracks. The rear-most portion of the bed can also be removed, allowing for taller items to be stored in the garage.

The home office is what really sets the Kelvin apart. As a photographer, the vehicle’s owner needed a place to work that could accommodate a large external monitor. Advanced RV designed a new setup that uses a Lagun table and the front passenger seat swiveled around to face rearward. The large external monitor is mounted on the wall behind the driver and swings out for a better view, while the owner’s laptop and hard drives are stored in a temperature-controlled cabinet. The setup is sweet and should make any digital nomad green with envy. I certainly am.