Mercedes-Benz Vans has announced plans to develop an all-new Electric Versatility Platform for the next-generation eSprinter.

The company is investing €350 ($423 / £315) million into the architecture and has fast-tracked its development. 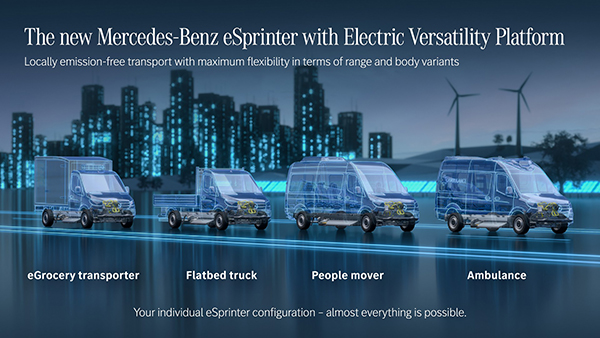 While the company didn’t go into many specifics, they confirmed the platform will use “three modules that allow freedom in the development and design of different body types.” The front module will contain high-voltage components such as charging equipment and a DC/DC converter, while the center module will house an underbody high-voltage battery pack. The third and final module has a rear e-axle with a “compact and powerful electric motor.”

The modular design allows for greater flexibility, and Mercedes said the next-generation eSprinter will be offered with two wheelbases and three different battery packs. All versions will be rear-wheel drive, but the platform will have “higher maximum payloads allowing for almost every conceivable body variant possible.” Speaking of which, Mercedes suggested there will be truck and van variants as well as ambulances and grocery transporters. 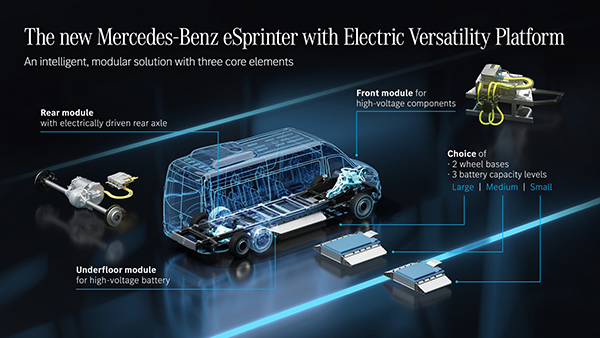 While that isn’t much to go on, the company said they’re “convinced of the ecological and economic advantages of battery-electric vans and will continue to push forward plans to bring electrically powered vans to market in all segments.” Mercedes also noted the next-generation eSprinter is being developed with the U.S. and Canadian markets in mind.

That’s a significant change as Mercedes hasn’t brought the current eSprinter to America due to high homologation costs and a less than impressive WLTP combined range of 96 miles (154 km). The company will undoubtedly address these issues with the new model, but there’s no word on how far it will be able to travel.