If you want to buy a large van, the Mercedes Sprinter is a go-to model for sale in the sector. The third generation Sprinter launched in 2018, but as you might expect, the new model wasn’t radically different from the last model. The main change is the addition of a host of advanced connectivity technology, which is taken from the Mercedes passenger car range. 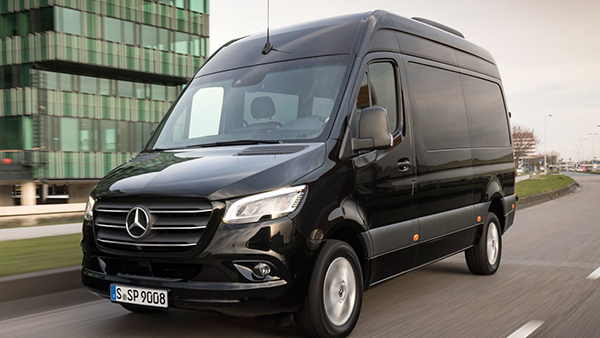 In terms of design, the Sprinter Mk3 is an evolution of what’s come before it, but slender new headlights – featuring LED bulbs on higher spec vans – a more upright windscreen and blistered wheelarches distinguish the latest model.

It’s under the skin where the most significant changes have been made. While the engine range is the same, with a 2.1-litre four-cylinder unit in three power outputs and a 3.0-litre V6 diesel (the Sprinter is the only large van on sale to offer a V6), front-wheel drive is now offered for the first time. This helps to lower the Sprinter’s load floor by 80mm to help loading, while 3.5-tonne versions of the FWD model are able to carry an additional 50kg of payload over the rear-drive variants.

As standard, all Sprinters feature a six-speed manual gearbox, while the rear-drive model has the option of a 7G-tronic auto, and the FWD model features a new nine-speed 9G-tronic torque converter auto for improved efficiency and performance.

If you’re a buyer looking to reduce emissions, especially for last-mile deliveries in urban areas, the all-electric Mercedes eSprinter is available.

The Sprinter is available in a bewildering variety of layouts. Go for the conventional panel van, and as well as front or rear-wheel drive, there are four body lengths and three roof heights to choose from, while crew cab, tipper, dropside and Luton versions are offered, and a chassis cab allows a variety of conversions to be added, too.

The panel van has a load area that features a large, flat, plastic-trimmed floor, plus a plywood lining is standard across the range. The box wheelarches have been strengthened and are able to carry as much weight as the load floor itself.

In terms of electronics, the Sprinter now comes with electric power steering, so it’s able to make use of Mercedes’s latest safety systems from its car range. Distronic adaptive cruise control is available, which is now capable of bringing the Sprinter to a complete stop before driving off again, and it can cope with driving in stop-start traffic without driver input. Lane keep assist is available too, while the active system can automatically brake the vehicle if it senses the Sprinter is drifting across lines.

Also included in the Sprinter is the company’s new Mercedes PRO fleet management software. All Sprinters come with this software, but if you subscribe to one of the eight fleet management packages that Mercedes is offering, then you can manage your vans and drivers in minute detail to keep an eye on running costs.

Top-spec cars can be had with Mercedes’ MBUX infotainment system first seen on the A-Class hatchback. The Sprinter was the second Mercedes model to be launched with MBUX, and it features voice control, high-resolution graphics and search functionality, and takes van tech to another level.

The Sprinter name is synonymous with the large van class, and the latest model is more versatile than ever to cater for almost every need in the large van class. The main rivals for the Sprinter are the ubiquitous Ford Transit, plus the Volkswagen Crafter (which is no longer related to the Sprinter), the Vauxhall Movano/Renault Master/Nissan NV400 family, the Citroen Relay/Peugeot Boxer/Fiat Ducato trio and the Iveco Daily. 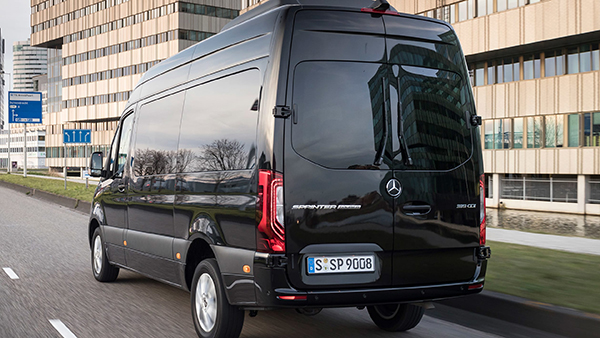 MPG, CO2 and Running Costs
With the introduction of front-wheel drive, the Mercedes Sprinter has a new-found level of fuel efficiency. There’s no longer an eco-friendly BlueEfficiency model on offer, but the nature of the FWD system means fuel economy is improved over the most efficient Mk2 models.

It also means that the starting price for the Sprinter range has dropped slightly, with vans available from £26,550 plus VAT, although the top-spec models can easily cost in excess of £50,000 if you rack up the options.

The FWD van’s optional nine-speed 9G-tronic automatic gearbox is designed to boost efficiency while also making driving easier, and is exclusive to the FWD model. The more compact transmission of the front-wheel-drive Sprinter saves weight, so it boosts payload, too.

The Mercedes eSprinter uses the same electric motor and battery set-up as the eVito, and has a useable driving range of around 90 miles, while an 80 per cent charge from flat should take around 45 minutes from a suitable source. 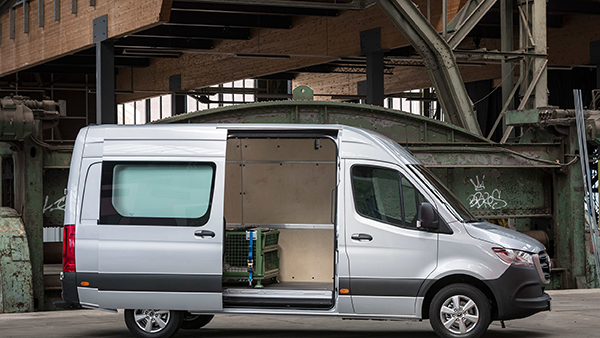 Load Space and Practicality
Mercedes has gone to town with the new Sprinter’s load carrying ability. There are four body lengths to choose from for the RWD model, and three lengths of FWD and chassis cab models, plus high-roof options for both the RWD and FWD panel vans and crew cab options, there should be a Sprinter model to suit every need.

The front-wheel drive Sprinter has a lower load floor and an extra 50kg of payload capacity when compared to the equivalent RWD Sprinter, making it ideal for multi-drop delivery drivers. However, it’s the rear-drive model that still achieves the big carrying numbers. Maximum load volume in the largest panel van is 17 cubic metres, and there’s a maximum payload weight of 3,175kg offered, too. However, the largest panel van may not necessarily be the best option, because the van’s gross vehicle weight might compromise its payload capacity, and smaller vans may be able to carry more weight, if not volume.

When fitted with a load bed, the Sprinter Chassis Cab has a maximum bed length of 4.3 metres. 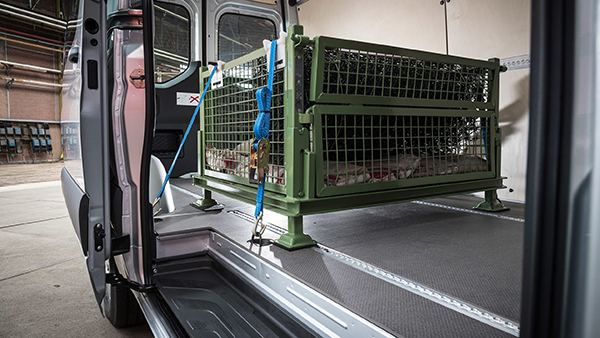 Reliability and Safety
With the introduction of electric power steering on the Mk3 Sprinter, Mercedes has been able to fit a raft of modern safety technology. Distronic adaptive cruise control is available, and this includes traffic jam assist, which is able to bring the van to a complete halt in stop-start traffic and set off again without any pedal input from the driver.

However, if you have adaptive cruise set on the motorway, and you approach a queue of slow-moving traffic, you are likely to be pressing the brake pedal well before the adaptive cruise starts to slow the van. It seems to react slowly to sudden changes in traffic speed, so puts the brakes on harshly when it does finally detect traffic ahead. If you do leave the Distronic to its own devices to do this, it can be rather disconcerting if it doesn’t slow you down as quickly as you might like.

Also available is lane assist and a driver fatigue detector. These two systems can work in conjunction with each other. If the lane sensing system detects a lane change over broken white lines without the indicator being activated, then it will gently vibrate the steering wheel in the driver’s hand to make them aware. If the system detects the van is crossing a solid white line at the edge of the road, it will apply the brakes to that side of the van to bring it back into line. The system reacts quite abruptly, though, and feels more like a warning for the driver to remain alert rather than a self-correcting driving system. 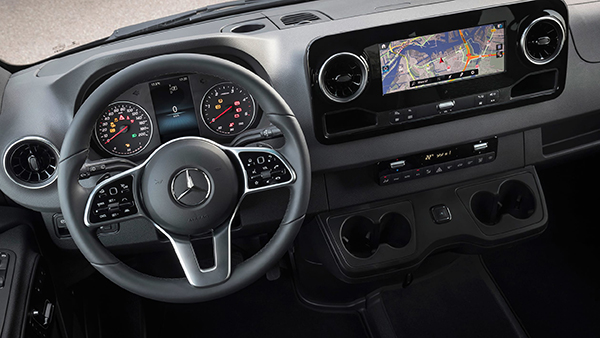 Driving and Performance
While the Mercedes Sprinter’s diesel engines are the same as before, they feel more refined in the Mk3. We’ve been critical of Mercedes’s 2.1-litre diesel in its car applications, but here they aren’t as noisy as before and only cause mild vibration when the stop-start system activates.

The first thing that strikes you about the Sprinter is how light the steering feels. That’s because it now comes with speed-sensitive power steering that adjusts its assistance according to how fast you are going. At low-speeds, the assistance is ramped up significantly so that parking and doing three-point turns is a doddle: you can turn the wheel with just a couple of fingers on one hand if you wanted to.

The weighting builds up the faster you go, although it does feel a little light as you negotiate roundabouts at about 20-30mph, but at higher speeds the steering has a solidity about it that makes the Sprinter feel stable. There’s zero feedback from the wheel, but it’s easy enough to keep the van pointing in the right direction.

There’s plenty of power on offer from the engine range. We’ve tried the 2.1-litre diesels so far, and while the least powerful 211 CDI will feel underpowered when at its three-tonne GVW limit, the rest of the line-up feels responsive enough for most needs. The six-speed manual has a positive shift, while the seven and nine-speed autos are smooth performers that don’t suffer form jerky shifts when they kick down.

Of course the Sprinter’s suspension is designed with load carrying in mind, but one surprising highlight of the van is how the rear axle doesn’t upset interior comfort in the cab. Hit a pothole with a front wheel, and yes it will send a shudder through the cab, but when the rear wheel follows, you’ll hear it thump, but it won’t be felt in the slightest.

Cab and Interior
The real highlight of the Sprinter Mk3 is its updated cabin. There’s been an effort to introduce some of Mercedes’ car tech here, and while hard-wearing plastics are still present, there are more concessions to luxury than ever before. There’s more soundproofing around the cabin, and this includes a flock finish for the roof lining and bulkhead behind the seats to reduce noise, while a plywood lining in the panel vans helps to reduce cabin noise when you hit bumps in the road.

The dashboard is well laid out, and higher spec models get soft-touch plastics in the right places to make the Sprinter feel more comfortable. Go for a Sprinter with electric seat adjustment and you get a set of controls placed on the door, just like Mercedes’ passenger cars.

The rotary air vents are sourced from the car range, too, and the Sprinter was the second model after the A-Class hatchback to get the company’s MBUX 10.25-inch infotainment system. This has a touchscreen, can be controlled from the multifunction steering wheel or you can use instant voice control with a Siri/Alexa-style ‘Hey Mercedes’ call to the system. It’s an effective set-up, although we found that if you say ‘Mercedes’ in normal conversation, you can accidentally activate the system.

As standard you get a seven-inch touchscreen, and while this is on the small side, it still has clear graphics. Mercedes has ditched its Garmin-based navigation of old in favour of a system developed in-house, and while Apple CarPlay and Android Auto are both offered, the Sprinter uses USB-C sockets, so be prepared to buy an adapter if you’ve got an older smartphone. Bluetooth is also standard on all models.

The other highlight of the new Sprinter is that it has been launched in conjunction with Mercedes Pro, the company’s new fleet management software. Every Sprinter that comes off the production line is fitted with a communication module that means it’s ready to be connected to a fleet management system. This can be tailored to suit the needs of every user, from a sole trader that needs to contact their local Mercedes centre, to a fleet manager in charge of hundreds of vehicles that need to be kept on the road to keep business moving.

Mercedes will initially offer eight different Mercedes Pro systems to cater for assorted business needs, and the idea is to simplify fleet management and communication between managers and drivers. The software is app-based, and because it uses Android as its operating system, Mercedes has made it open-source, so that different customers can tailor the software to suit their needs.