Mercedes-Benz 300 SLR “722” parades through London in a tribute ride to Sir Stirling Moss. Famous sites show up in the photo gallery. It is actually a farewell tour before the car takes its place back at the Mercedes-Benz Museum in Stuttgart. 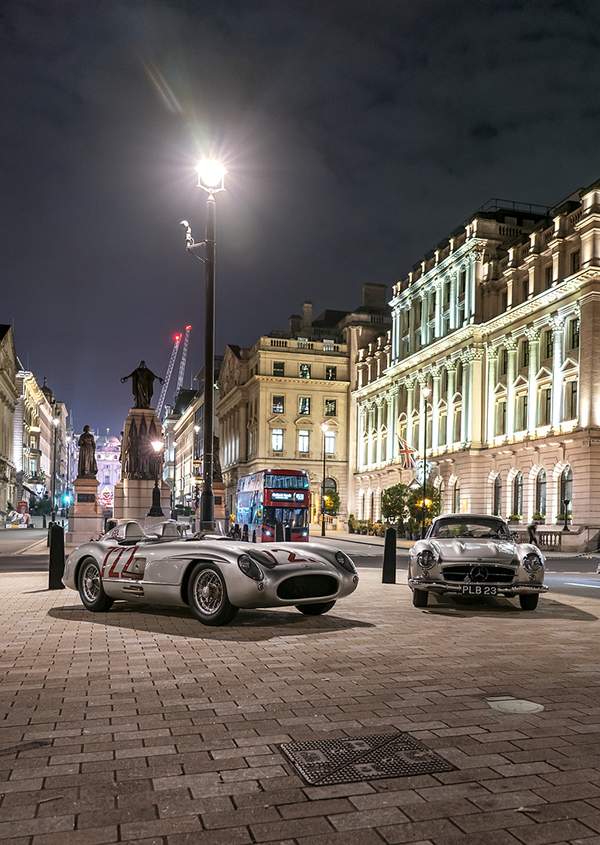 In the 1970s, a policeman pulled over a car that had just performed a risky overtaking maneuver in the streets of Lonon. “Who do you think you are? Stirling Moss?”, the policeman asked the driver.

“Yes, sir, I am”, the answer came. And he really was. “The Last Blast” tells that story and many others with the legendary driver in the spotlight. Also in the spotlight, accompanied by an eight-policemen escort, is the iconic Mercedes-Benz 300 SLR “722”, the car that Moss drove to glory in the 1955 Mille Miglia Race. His navigator from Brescia to Rome and back was Denis Jenkinson. To honor that victory, Mercedes allowed the straight-eight engine howl one last blast before going into retirement forever.

Filming took place at the end of September 2021 in London, almost a year and a half after Sir Stirling Moss had passed away. He was 90 years old. More than half of them had been in motor racing. Moss has spent 60 years of his life in London. But he had never driven the famous SLR “722” in the English metropolis. 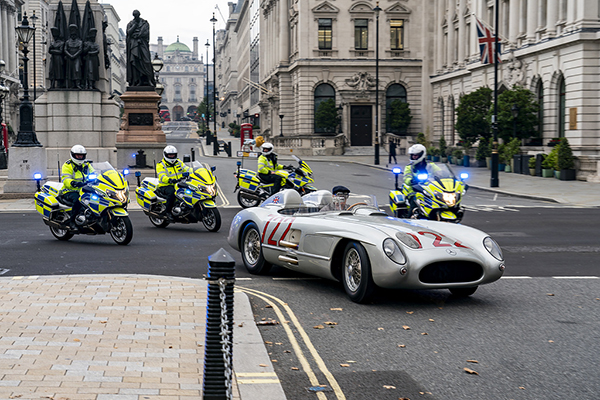 Mercedes-Benz 300 SLR “722” hits the London streets
The three-and-a-half-minute film will take viewers from The Temple, on an early Sunday morning, to the Houses of Parliament, Trafalgar Square, Royal Automobile Club, and the Ritz Hotel. Sir Stirling’s very own 300 SL Gullwing also shows up in the video. It was the car Sir Stirling Moss traveled from London to Italy to start in the Mille Miglia.

His son, Elliot Moss, stands in front of the door looking at his watch, a piece that his father wore for many years. The watch reads 7:22 am. It was the original start time of Moss and Jenkinson in 1955 and the reason for the car’s racing number. At the end of the film, the engine of the 300 SLR is switched off forever. The car will return to the Mercedes-Benz Museum in Stuttgart, Germany.

The team that carried out the aerial work for the James Bond franchise did the helicopter shots in London.