When the Mercedes-Benz GLB debuted in 2019, I was unsure of it at first. The boxy crossover had a big presence, but it seemed to occupy an unnecessary space between the tiny GLA and hot-selling GLC. With a higher starting price than the former and less power than the latter, the GLB seems on paper at least like a strange middle child.

But even within the expansive Mercedes product line, this compact SUV stands out from its siblings. Curious to see what it’s like to live with the GLB from day to day, our editors set up an extended review period, keeping the car for two months and using it as a true daily driver. As an added bonus, the test vehicle was the spicy GLB 35 AMG model, packing a more powerful four-cylinder engine and other performance upgrades. After a few thousand miles behind the wheel, the verdict on the GLB 35 boils down to this: It’s a phenomenal blend of style, performance, and practicality, provided you’re willing to pay the somewhat steep cost of entry. 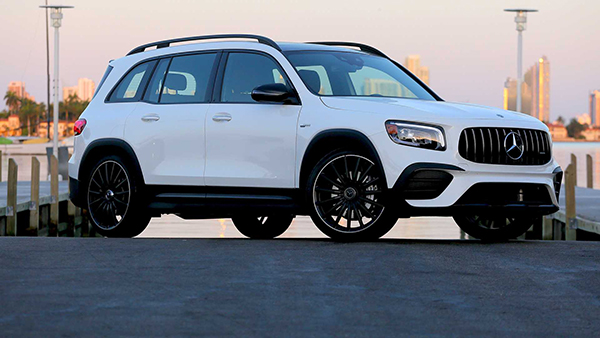 What a great-looking little crossover. If the GLA is too compact and the GLC is too conventional, the GLB is the perfect, abstract in between. Its design is a fun change-up from the SUV mainstream and better off because of it. Mercedes makes so many darn cars these days that it’s hard at times to tell one from another, but the GLB pleasantly stands out from the bunch.

This crossover is a spiritual continuation of the old GLK, with its boxy appearance and chunky proportions. But where GLK featured sharper angles and body lines, the GLB smooths things out with minimal creasing in the panels and a rounded-off front end. The best details are the square headlights that give the car a distinct look.

This GLB 35 model dials up the drama in the right places, too. The downside is that most of the cosmetic enhancements all cost extra money – true to AMG form. Included on this tester is the $750 AMG Night Package that adds gloss black trim to the front splitter, mirrors, window trim, rear bumper, and exhaust tips. The 21-inch multispoke black wheels are both pretty and pricey, costing a rather insane $2,100. Even so, they’re some of the best-looking wheels on sale today, and therefore a necessary addition.

Inside is the copy-and-paste Mercedes approach that we know and love, with a few tweaks to make the GLB its own. Unlike some of those aforementioned siblings, this GLB shakes up the materials with matte Linden wood trim and Bahia brown leather. The former elevates the interior dramatically, while the latter is a bit too reminiscent of a football skin. Other touches stand out like the gorgeous trio of circular HVAC vents in the center stack and prominent ambient lighting that dominates the cabin in any low light scenario. 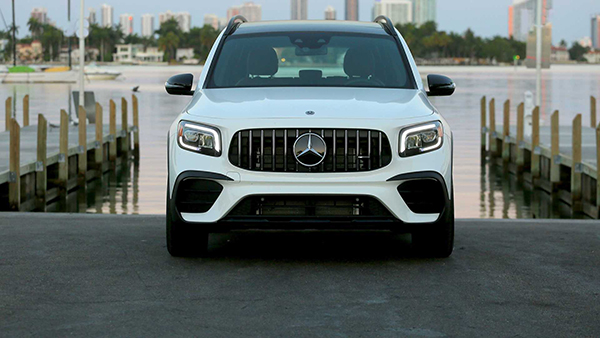 As a crossover between segments, the GLB offers a decent amount of space considering its tight packaging – actually more than the larger GLC. Front passengers get 40.4 inches of headroom and 41.1 inches of legroom to go with it. The backseat isn’t punishing either, offering 39.3 inches of headroom and 38.1 inches of legroom. Things are better in the first row of chairs, but I regularly put passengers above six feet in the back and seldom heard a complaint.

There is an optional third row of seats, which our test car did not have. Cargo space is abundant too, with 27.0 cubic feet available behind the second row. That’s better than the platform-sharing GLA (15.4 cubes) and comparable Volvo XC40 (20.7 cubes).

The AMG 35 model swaps out the GLB 250’s suspension setup for a firmer sport suspension. I’m pleased to report that it doesn’t come at the cost of ride quality, which is nice and supple in the little crossover. At low speeds, the GLB is less forgiving over potholes and road imperfections but calms down significantly when moving along at speed. Overall, I came away impressed by how comfortable the crossover felt in everyday driving.

The only thing holding the car back from a higher comfort score is some pretty substantial wind noise that enters the cabin at anything above city speeds. There is also some noticeable road noise which is likely the fault of those big 21-inch wheels. 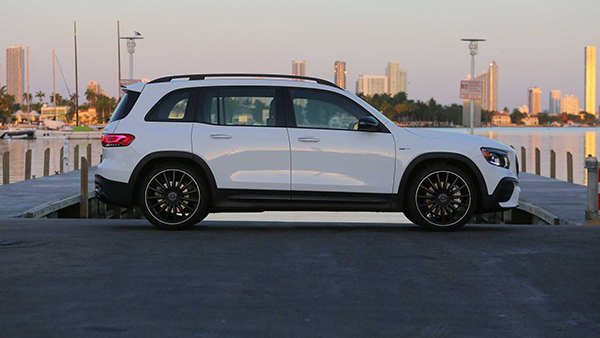 We’ve come to know and love the MBUX infotainment system. The GLB makes use of the smaller screens, also found in the A-Class, CLA, and GLA. That means twin 10.3-inch displays, with one functioning as a digital gauge cluster and the other a touchscreen for controlling the car.

With the redesigned S-Class now in the picture, this is no longer the newest MBUX operating system, but that by no means makes it obsolete. When using the center console touchpad or poking the screen itself, the system responds quickly. Over the extended review period, I can’t recall a single time where anything froze up or became unusable. Wireless Apple CarPlay and Android Auto aren’t available yet, but the wired versions of both performed without a hitch. Mercedes is part of the growing list of carmakers that ditched USB-A ports altogether, so if you’re using an older charging cable, be prepared to buy an adapter.

Another tick in the W column is the $850 Burmester audio system, which puts out solid sound with great clarity. It’s not the more powerful (and more expensive, $4,550) Burmester 3D audio system found in bigger models – which does sound better – but for less than a grand, it’s a fantastic upgrade. 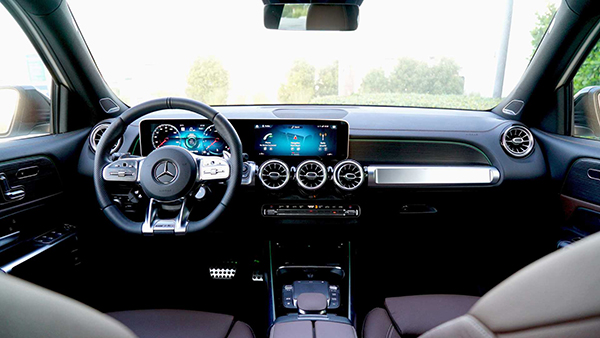 It’s a nearly $12,000 commitment to get the GLB 35 over the GLB 250, but the price increase comes with a decent bump in power and torque. The AMG gets a turbocharged 2.0-liter four-cylinder good for 302 horsepower and 295 pound-feet, up from the standard car’s 221 hp and 258 lb-ft. Mercedes quotes a zero to 60 time of 5.1 seconds, which is pretty spry for a vehicle of this size with moderate power. Numbers aside though, this powertrain is all about character.

In Comfort mode, AMG’s four-cylinder is docile, hardly making its presence known as a performance engine. But the GLB’s Sport and Sport Plus modes dial things up considerably, with a big surge in noise and throttle sharpness. Above 4,000 RPM is where things really come alive, on the good side of some considerable turbo lag. This car rewards a heavy foot, with the majority of performance coming deep into the throttle.

There are better transmissions out there than the eight-speed dual-clutch found in the GLB 35, but it mimics the engine’s trend from calm to charismatic, depending on drive mode; shifting in the racier settings elicits a much more aggressive gear change, with an audible thump from the exhaust to match it. At times the gearbox holds onto gears longer than necessary in an effort to keep the revs high, but manually shifting with the paddles is an easy fix for this.

Considering the GLB 250’s prominent body roll, it’s impressive how buttoned up the GLB 35 feels in the corners. The standard AMG sport suspension keeps things nice and planted, while the all-wheel drive offers fantastic grip. Hustling this crossover back and forth gives the vague impression of a hot hatchback, which is the quickest way to my enthusiast heart. 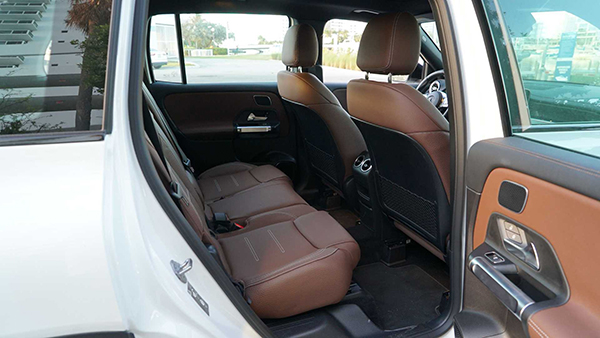 Although Mercedes offers enough safety tech to give this car a potential perfect score, this tester was notably missing lots of it. The GLB 35 did have blind-spot monitoring, automatic emergency braking, and a nice high-resolution backup camera but that’s about it.

The majority of the safety kit is tied to the Driver Assitance package, which costs $1,700. It adds sought-after equipment like adaptive cruise control, lane-keeping assist, and rear-cross traffic alert. Mercedes also demands that you add the augmented reality navigation ($1,295) and Premium package ($800) to get the Driver Assitance tech, so in total it’s a $3,795 addition. This is a steep cost of entry for a car that costs over $60,000, and more of the systems should come standard. 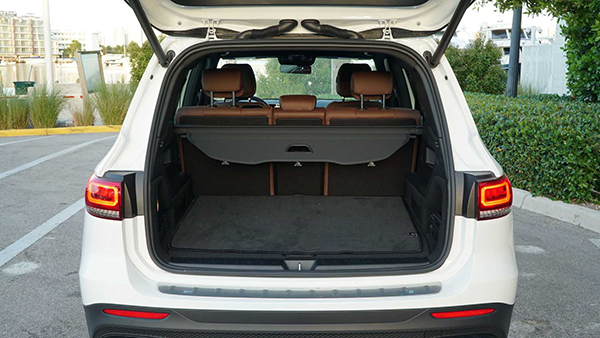 Economy figures for the GLB 35 could be better, but they’re not completely punishing for a performance vehicle. Running on recommended premium fuel, the AMG achieves 21 miles per gallon in the city, 28 on the highway, and 23 combined.

Yes, that’s a harsh score, but the GLB earns it because of a long list of pricey extras. The little AMG starts at a fairly reasonable $49,500, but with options and the $1,050 destination fee checks in at $61,665. The biggest-ticket item is the aforementioned set of 21-inch wheels ($2,050), while augmented reality navigation adds $1,295, and the AMG Night Package tacks on another $750. Throw in a few other add-ons like the $1,500 panorama sunroof and $800 Premium package with keyless entry, auto-dimming rearview mirror, and power-folding side mirrors.

Competitor pricing starts mostly in line with the Mercedes, though the GLB takes the cake after adding so many options. A comparable Jaguar E-Pace P300 starts at $49,995 and ends up at $54,000 when similarly specced to the GLB, which is a decent savings. The BMW X2 M35i starts below the other two at $46,450 and ends up being the most affordable with identical equipment at around $53,000.