Mercedes-Benz GLB-Class is precisely what Mercedes and the market needs right now. It’s a cute and eminently useful little crossover for the right price with a luxurious three-pointed star on it. So, what does Mercedes do to improve the formula? Let AMG have a go at it, of course. 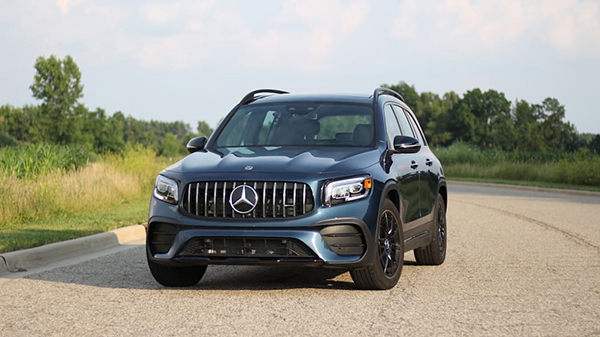 Mercedes didn’t bust out of the gates, as its first attempts at affordable front-drive-based cars in America with the original CLA and GLA were a bit underdone. The next round of “cheap” Mercedes vehicles are far better with an expanded field of winners. There are some we like more than others, though, and we can count this AMG GLB 35 as one of them.

Just like the GLA- and CLA-Classes, the GLB offers a standard 250 variant. It does not, however, offer their totally bonkers 382-horsepower AMG 45 variant. Instead, their medium spice is the GLB’s top specification, including a 302-hp 2.0-liter turbo that’s still plenty of fun being a hooligan with. All the other performance goodies added onto the 35 over the standard GLB are nothing to sneeze at either. Its setup is essentially the same as the GLA 35 that Senior Editor James Riswick likened to an extra-tall hot hatch.

The chassis is worked over with AMG-specific steering knuckles, control arms and rear subframe. It comes with AMG’s electronically-controlled adaptive dampers. An AMG-specific all-wheel drive system is fitted that maxes out at 50:50 torque distribution. A variable-ratio steering rack aids handling, and larger brakes are fitted at all four corners with the expected AMG branding on the calipers. It even has the wide range of AMG drive modes to choose from, and you can affordably option the convenient steering wheel-mounted quick toggle buttons, too. 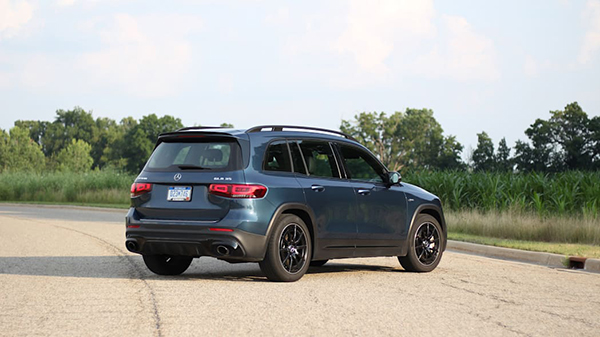 Basically, don’t underestimate this AMG product just because it’s a 35 and not a full-fat 45. There was serious effort paid to make this little crossover fun to drive. That attention to detail is seen on the exterior, too.

The GLB already looked good in 250 form, but it doubly excels in AMG 35 guise. It adds the big radiator grille in front, a bigger splitter, roof spoiler, different rear bumper, sporty dual exhaust and one of many different wheel options. Our tester had the 19-inch matte black 10-spoke AMG wheels — they’re rather strange with the extra inner rim, but make up your own mind. Their reasonably small size certainly helps the ride comfort versus the optional 21s, but it’s hard to argue with how good the 21-inch wheels make the GLB 35 appear.

The important takeaway here is that the GLB 35 has looks to kill. BMW’s X2 M35i does reasonably compete from an aesthetic point of view, but the GLB’s utility makes it the better design as a whole (more on that later). And if boxy isn’t your thing, the GLA 35 is lying in wait. 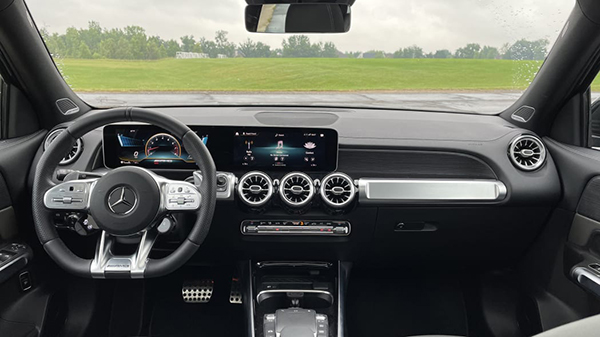 Driving the GLB 35 is wildly fun, too. Just like the other AMG 35s, this car is “on” from the second you pop it into Drive. The snappy and quick eight-speed dual-clutch automatic transmission cracks off upshifts with a pop that accentuates and underlines every shift. It makes you want to drive around in manual mode the whole time, tapping away at the paddles to hear all the crackles on the overrun. Even if the GLB 35 doesn’t have its eyes set on fast lap times like some more focused AMG products do, the level of drama and added theater encourages a heavy right foot.

Acceleration is properly brisk, as launch control starts have the little crossover hitting 60 mph in just 5.1 seconds. It’s just the right amount of power to add a little zest to stoplight getaways, but not too much that you’ll land in jail from excessive speeding. That initial pull begins to fade quickly above 60 and 70 mph, as much of the perkiness around town can be attributed to the extra-short gearing — you hit 60 mph in third gear.

The GLB 35 is an adequate tool to use for canyon carving, but as we expected after driving the smaller GLA 35, the GLB’s larger footprint and extra tallness result in it being not nearly as agile or darty. That said, you can still hustle this little crossover around and have fun pushing it. Our tester’s all-season tires showed their lack of grip rather quickly, but set the adaptive suspension into Sport, and body motions are nicely controlled with the stiffness and sharpness you’d expect from an AMG. Unfortunately, the GLB’s steering is a bit numb, and its weighting isn’t as sharp as other AMG 35s.

The mighty little 2.0-liter has a great four-cylinder zing all the way up the rev range, and so long as you’re already moving, throttle response is excellent. You’re in for a long wait if you stomp on it from a standing start without launch control, but Mercedes does a great job of keeping the wait for boost brief-to-non-existent when you’re on and off the throttle through corners. It’s a constant treat to work the paddles and the whole rev range. You can even get a slight tail wag in AMG’s sport traction mode if you really want to, but the all-wheel-drive system generally tries to keep things neutral.

What ultimately makes the GLB 35 such an attractive option is how good it is as an all-around vehicle. Being a GLB-Class, it’s shaped like a box with the utility of a car far bigger than it looks — Riswick found its cargo capacity to be about as effective as a Subaru Outback’s. The second row is high on legroom and headroom, and it also slides. That’s a great, rare feature that increases cargo versatility, but it’s also a necessity because of the third-row option. Yep, there’s a third row available and this was the first time we’ve had an opportunity to test it in a GLB. As expected, it’s mainly just sufficient enough for a very small child, but scoot the second row up a bit, and you can stick two adults back there for a short ride. That sort of flexibility is what makes the GLB 35 such a great option if you’re tight on parking space and live the one-car life.

Beyond the performance and sheer utility, the GLB still does a dutiful job of being a luxury car. Some of the materials are not up to the standards of more expensive Mercedes products, but they’re better than most in the class and benefit from a flashier design. You sit up tall and gaze out over the gorgeous twin displays running the MBUX infotainment system. The steering wheel controls are tactile and lovely, and interior upholstery options are aplenty with black, red, brown and gray leather available.

The seats themselves are supportive (though they could use more bolstering) and afford you excellent visibility around the glass box that the GLB is. There’s a small price to pay in ride quality with the AMG versus a standard 250, but it’s not so stiff as to feel brittle over bumps and potholes (consistent with the AMG GLA 35). Noise levels are plenty acceptable for city driving, but it’s no S-Class when it comes to highway driving. Wind and road noise are elevated, no doubt in part because it’s a box.

If there is one big obstacle to hurdle over with the GLB 35, it’s the price. This little crossover starts at $50,550, and it goes up very quickly with Mercedes’ expensive options list. Desirables like heated seats, auto-dimming mirrors, proximity entry, a head-up display and the driver assistance suite all add up quickly. Equipped to our satisfaction, a GLB 35 is running around the $60,000 mark. That’s right where the AMG GLC 43 comes into the picture. It doesn’t have quite as much equipment and actually has less cargo space, but it has richer interior materials and higher overall refinement.

Value may be questionable, then, but looking beyond that, the GLB 35 has an inherent charm to both its appearance and performance. It’s a little crossover with a spunky soul that makes you want to show it off and drive it hard. At the same time, it’s highly functional, smartly straddling the line between performance and usability. It’s an excellent addition to the Mercedes small car arsenal.