Despite some obvious compromises when it comes to space, the GLB 35 is still surprisingly satisfying to drive, so it does offer performance that fits with its AMG boot badge. However, it’s also surprisingly cramped, so it’s best thought of as a five-seat hot SUV with occasional seven-seat capability. Putting the smart tech and the AMG’s premium feel to one side, with this in mind it seems like a pricey option that makes the GLB 35 something of a niche choice. 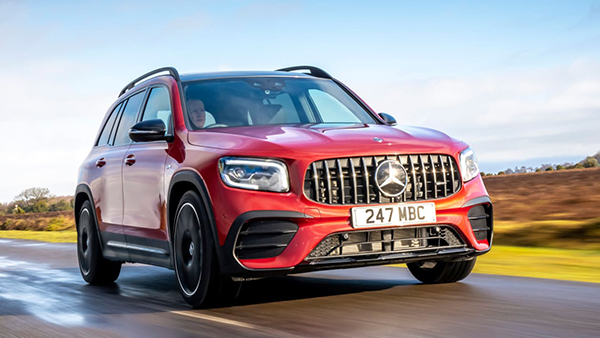 The way of the modern automotive world is that platform and powertrain commonality between models means that, when a car based on a certain architecture using a certain engine and gearbox comes out there’s a certain degree of expectation. But every now and again the automotive world throws up a surprise – and the Mercedes-AMG GLB 35 is one of those.

The GLB is Mercedes’ compact seven-seat SUV, so installing the 302bhp 2.0-litre four-cylinder turbocharged engine, seven-speed dual-clutch automatic gearbox and the four-wheel drive system found in the A35 hot hatch might not seem the most logical combination, but performance SUVs mean keen drivers with bigger families can have their cake and eat it, not to mention the fact they’re a brilliant way for car companies to make profit.

However, they are also sometimes compromised, and the GLB 35 exhibits this trait too – but not in the way you might think. 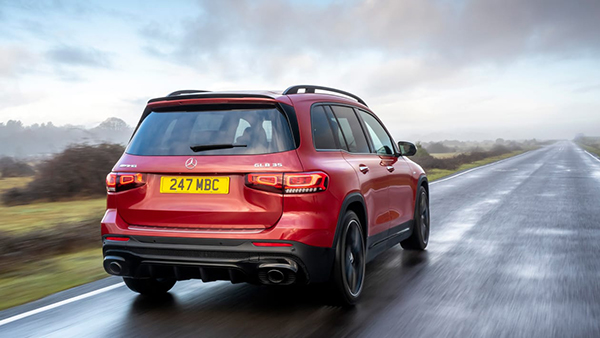 Usually seven-seat performance SUVs are big and practical but don’t back up the ‘hot’ tag all that well. Yet the GLB is better than you might imagine here, albeit compromised when it comes to space.

Despite offering seating for seven, the GLB isn’t actually that big. In some ways it’s more like a raised up estate with two seats in the boot, which means that in the third row it’s quite cramped – and you only get 130 litres of boot space with all seats in place.

You can slide them forward to create a little more legroom for your back-seat passengers, but then this impacts space in the middle row, which is only average at best. 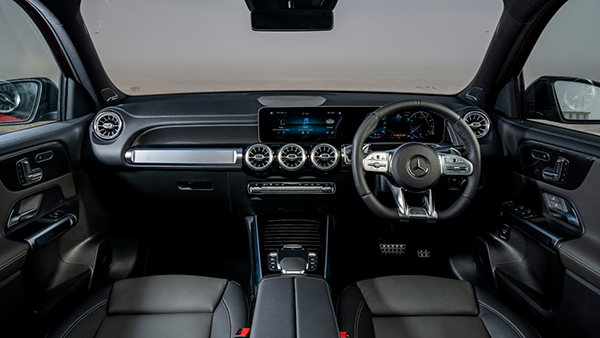 Fold the rear seats down and boot space increases to a more respectable 500 litres, so it’s better to think of the GLB 35 as a practical mid-size model with its seven-seat capability best saved for occasional use when it’s really necessary.
However, the AMG’s more compact footprint and relatively low roof height and weight for a seven seater (1,770kg) means that it actually handles quite well. This is where the surprise comes in.

The steering is light but has more of a natural feel and a nicer weight than a Volkswagen Golf R hot hatch, plus it’s accurate, so you can make the most of the surprisingly high level of grip on offer.

The car also doesn’t roll too much in corners, partly due to a firmer suspension set-up to deliver its dynamic ability, while the tenacious 4MATIC four-wheel drive system means that, even with 302bhp and 400Nm of torque, traction is never an issue.

However, while the GLB isn’t large for a seven-seat SUV, the void inside its cabin is still quite big for a performance model, so you feel some flex in the body that’s exacerbated by the stiff chassis.

It means vibrations do ping back through the structure over potholes and bad roads, rattling the trim as the 20-inch alloy wheels thump around. At least on motorways and smoother roads comfort is ok, although there is some roar from those big rims. 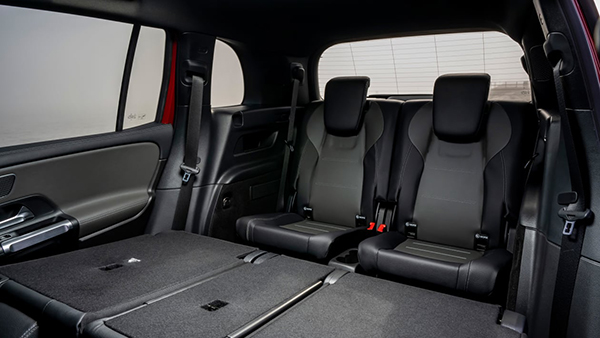 In the sportier modes the engine’s guttural sound signature (some might call it a drone) helps drown this out; the four-cylinder motor revs smoothly and without any steps or surges in its delivery, so it’s predictable.

With launch control it’ll sprint from 0-62mph in just 5.3 seconds – fast for a seven-seat car – but the engine is at its best in the mid-range, however.

The gearbox is a great partner, slurring changes as an automatic and slicing through ratios in manual mode. The real metal gear shift paddles are a nice, tactile touch, too. 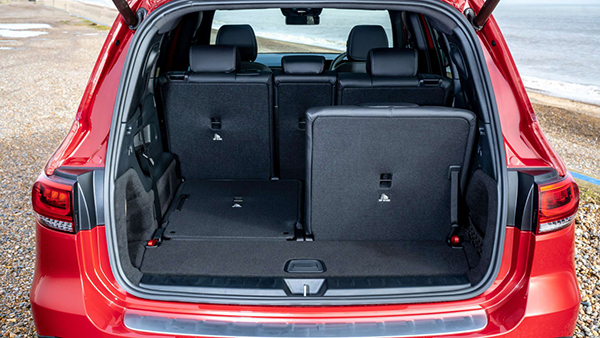 It’s not the only nice touch inside, with much of the trim in the cabin helping to boost refinement and premium appeal, offering plenty of slick-operating tech in the form of Merc’s MBUX infotainment. But then it should, as the GLB 35 in Premium Plus form (the only trim level available) costs £50,205.

The twin 10.25-inch screens are super sharp and bright, offering plenty of functionality and great responses to your inputs. Apple CarPlay and Android Auto integration are also standard if you’d prefer to hook up your smartphone, and both systems work just as well as Mercedes’ own.

As you’d expect from a range-topping model costing this much, you also get lots of other tech, including keyless operation, LED lights, a panoramic roof, parking sensors and a reversing camera, heated leather sports seats, and a good level of safety tech for a family SUV.

One further compromise, and something that’s specific to this powertrain, is that the sporty GLB 35 only claims 31.0mpg and 206g/km of CO2 emissions, so the running costs could be higher too. But then that’s the price you pay for the performance.