Owning a Mercedes-AMG G 63 is great, but knowing that you’re one out of one hundred people who own a custom model makes it more worthwhile. German star Sascha Gerecht, currently living in sunny California, showed his recent purchase is a Brabus 700 model. 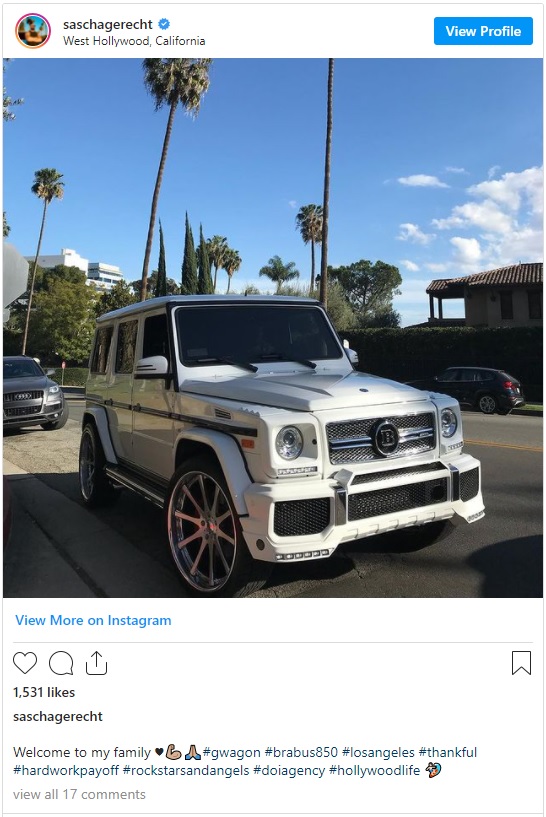 Sascha Gerecht is a man of many talents. With his name on social media saying “German Tank,” he is a DJ, music producer, clothing designer, night club owner, and reality television personality. Thanks to his many skills, he reached a net worth of approximately $2 million and purchased a new car to highlight his newly achieved status.

The TV personality bought one out of the 100 models made for the U.S of the Mercedes-AMG G 63 by Brabus, showing the crimson off-roader on his Instagram profile. Commissioned by Los Angeles-based car retailer Wires Only, which specializes in selling luxurious vehicles to celebrities and other high-profile individuals, the G 63 ended up with Sascha Gerecht, as he shared on his Instagram Stories.

The G 63 comes with a 4.0-liter V8 engine putting out 577 horsepower from stock, but this isn’t what the DJ purchased. During the makeover, Platinum Group also gave it a performance engine upgrade, taking it to 690 horsepower (700 ps). Other updates to the G 63 include a Brabus Widestar widebody kit, and 24-inch Brabus Monoblock Z wheels, as well as a lowering suspension kit. The crimson color combined with glossy or matte black accents makes it stand out. Well, it couldn’t keep a low profile before these modifications either.

This isn’t the first time Gerecht has purchased a Brabus model, also owning a white Mercedes-AMG G 63 with 838 horsepower (850 ps), revealing the purchase on Instagram in February 2018.

In his garage, the DJ also has a Range Rover Autobiography and classic Mustang Shelby GT500 also known as Eleanor, similar to what Nicolas Cage drove in Gone in 60 Seconds. So, the new addition will feel quite comfortable next to his other vehicles and is definitely a head-turner when he takes out for a spin.