With good reason, the new C63 has been getting all the attention lately. It’s losing half of its cylinders while putting on some weight after adding electrification into the mix. But what about the C43? Well, German magazine Auto Bild claims to have some preliminary details about the “AMG Lite” version of the new C-Class. 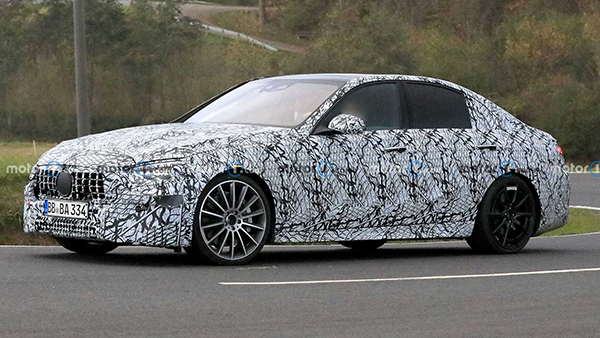 Contrary to previous reports, the “warm” C might not transition to the “C53” name as originally believed, a change which would bring the lesser of the two C-Class AMGs in line with the bigger E53 / CLS 53 / GLE 53. Instead, it’s supposedly going to be called “C45” and Auto Bild believes there won’t be a C53 since the gap between the C45 and C63 would be too small to justify a third AMG derivative.

Much like its spicy C63 sibling, the C45 is expected to rely on the world’s most powerful mass-produced four-cylinder engine. Borrowed from the AMG A45 S, the turbocharged 2.0-liter “M139” develops an impressive 416 horsepower (310 kilowatts) and 369 pound-feet (500 Newton-meters) of torque in the hot hatchback.
The four-pot already has an extra 31 horsepower (23 kW) than the twin-turbo 3.0-liter V6 installed in the outgoing C43, but it’s down on torque by 15 lb-ft (20 Nm).

With all C-Class versions getting mild-hybrid tech, the torque deficit will be erased after implementing the integrated starter generation (ISG). What the C45 won’t get will be the rear-mounted electric motor of the flagship C63, meaning the output will be well below the rumored 550 hp of the range-topper.

Another major change brought by the generation switch could be the death of the C43 Coupe and Convertible. Mercedes recently said it would remove some of its two-door models from the lineup, and logic tells us the Cs are the most vulnerable. We haven’t seen any spy shots with prototypes of the next C-Class Coupe and Convertible, so it looks like the two are on their way out.

The C45 in sedan and wagon flavors could be unveiled before the year’s end or early 2021, with the C63 in the same body styles to follow at a later date.