All eyes are on the C63, but what about the “AMG Lite” version? Well, it just so happens the lesser of the two performance sedans from Affalterbach has been spotted by Motor.es undergoing final testing in southern Europe. There are conflicting reports regarding the model’s name, with some saying it will stick to the C43 badge while others claim it’ll be aligned to the 53 moniker used by the E53. Plot twist – Auto Bild argues the name will be C45.

Regardless of how it’s going to be called, the sports sedan will soldier on with the quad round exhaust tips whereas the full-blown C63 will retain the more angular finishers. Other noticeable differences between the two AMGs are the smaller wheels and less aggressive air intakes of the C45, which also doesn’t seem to be as glued to the road as the C63. A closer look reveals the front air vents appear to be fake whereas those of the C63 are functional. 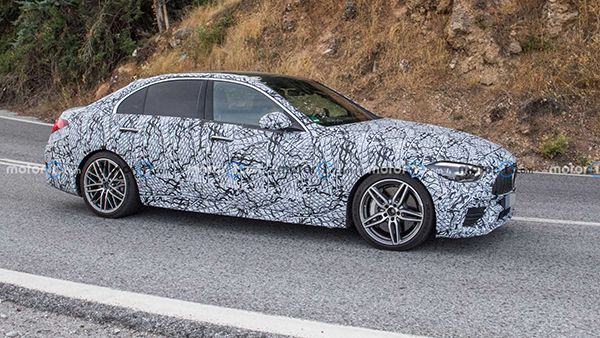 As with all the other C-Class models – including the C63 – the new C45 will be powered by a four-cylinder engine. It too will source the turbocharged 2.0-liter unit from the 45 cars, but without the rear-mounted electric motor reserved for the C63. It’s unclear whether the combustion engine will benefit from the electric turbocharger developed originally for the AMG One hypercar or if the tech will be limited to the C63.

In the flagship model, the M139 with its e-turbo will be good for 442 horsepower (330 kilowatts), which is already a lot more than the 385 hp (287 kW) delivered by the twin-turbo 3.0-liter V6 of the outgoing C43. Both flavors of the AMG are expected to come in a more practical wagon body style as well, while the coupe and convertibles are likely going to be merged with the two-door E-Class models to create the CLE, supposedly with performance derivatives in tow.

We’re expecting the C45 to debut first, likely early next year, with the C63 to arrive later in 2022.