Mercedes B-Class isn’t exactly swamped with rivals, but with BMW releasing its second-gen 2 Series Active Tourer this year, Stuttgart needed to fight back. Meet the new, facelifted Mercedes B-Class, which arrives with subtle design tweaks and electrified engines to fight for class honours in the premium MPV sector. 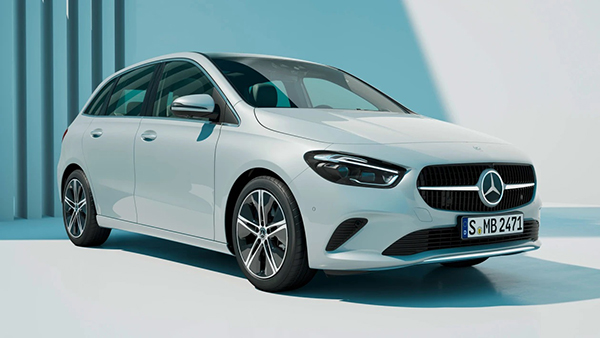 Entry-level pricing has been announced for the B-Class, with it costing from £35,100 in B 200 Sport Executive guise. Above that is the AMG Line Executive, AMG Line Premium, AMG Line Premium Plus, and the limited-run Exclusive Launch Edition. Pricing for the rest of the B-Class range will be announced in the coming months.

Inside, the overall cabin design is the same as in the outgoing car, with piano black elements contrasted against silver switchgear and turbine-style air vents on the dashboard. The facelifted model does include more standard equipment, however, with an extra USB-C port, a reversing camera and a new nappa leather double-spoke steering wheel.

The new B-Class continues to offer a dual-screen infotainment setup, with a 7-inch digital instrument panel coupled to a 10.25-inch central touchscreen. For extra cost, the instrument display can be upgraded to a 10.25-inch unit, and new graphics for the MBUX interface bring the system into line with the latest Mercedes models.

The system also offers improved responsiveness and the addition of a fingerprint sensor – set to be available from early 2023 – which is used for driver recognition and authorisation. The “Hey Mercedes” voice assistant is also more feature-rich, with a new tour guide function that provides information about landmarks and points of interest as you drive. It’s only available in Germany for the time being, though.

Elsewhere, the facelifted B-Class receives new Artico faux leather upholstery colours, with the option of suede trim and red stitching for range-topping AMG Line Premium Plus models. Certain trim elements have been updated with sustainability in mind, too, including the use of recycled fabrics for the seats. Top spec models also get LED headlights and LED rear lights, with every version offering adaptive headlights as standard. Mercedes’s “Multibeam” LED headlights are standard on the Premium Plus model.

Mercedes also cites improvements to the car’s driver assist systems, but the key changes are under the bonnet of the new B-Class. It arrives with a range of mild-hybrid petrol engines, alongside three diesel options and a plug-in hybrid. The mild-hybrids utilise a 48V starter-generator unit that recuperates energy under braking for improved efficiency and smoother stop/start transitions in traffic. The system can also provide an extra 13bhp while accelerating.

Buyers can choose between four mild-hybrid petrol models, beginning with the entry-level B 180. This offers 134bhp from its 1.3-litre four-cylinder motor, with the 161bhp B 200 equipped with a more powerful version of this engine. A pair of 2.0-litre, four-wheel drive options sit above this, in the form of the B 220 4MATIC and the B 250 4MATIC. These provide 187bhp and 221bhp respectively.

As before, plug-in hybrid power is available in the form of the B 250 e, which pairs a 1.3-litre petrol engine with an electric motor for a total output of 215bhp. This variant benefits from a revised battery and motor set-up compared with the previous plug-in model, along with a faster 11kW AC charging rate. With 22kW DC charging capability, the B 250 e can be topped up from 10 to 80 per cent in 25 minutes.